Has there been a change in the relationship between PX and Sun and Earth? It seems as though the MagSph is being compressed more frequently, as the intelligent Howard on the EC/PS Ning recently outlined. https://poleshift.ning.com/profiles/blogs/magnetic-twist-and-the-effects? Also, we are starting to see more activity from the Sun, as CMEs. Back in 2008, the Zetas said this about solar activity: http://www.zetatalk.com/index/zeta459.htm So, are we seeing a progression in the 270 degree roll of PX, where the S pole of PX is beginning to have a greater effect on the Earth and move away from its quieting effect on the Sun?

The compressed magnetic field of Earth is due to the Earth attempting to accommodate the hose of magnetic particles from Planet X by going end-to-end with Planet X, the preferred magnetic alignment when two or more magnets are forced together. The twisted field occurs when Planet X has subsumed the magnetosphere of Earth, and is flowing though it from S Pole to N Pole. The twisted field occurs when the planets find it difficult to go end-to-end, though this is the preferred posture, and thus the increase in incidents as a keen eye'd Pole Shift ning member noted.

Indeed, as the Last Weeks approach, the Earth will increase her twisting and turning in her attempts to accommodate both the Sun (the dominant magnetic influence in the solar system) and Planet X, who is coming ever closer. The cup, the crab-like grip that Planet X has on the three planets caught in the cup, will close, forcing these planets to be ever closer to each other and ever closer to Planet X itself. But until the Last Weeks have arrived, the time when the N Pole of Planet X is pointing directly at Earth, consistently and without relenting, has not arrived. In the meantime, thrashing will occur, with the posture of Earth changing not just periodically, but even many times a day. This can already be seen in the patterns shown!

@ Katt - Once Earth is caught in a fixed end-to-end magnetic alignment with Planet X, Earth and Planet X will essentially become a single magnet.  The magnetons from Earth's N. Pole will flow directly into the S. Pole of Planet X.  Likewise, the magnetons from the N. Pole of Planet X will flow directly into the S. Pole of Earth.  Keep in mind that since Planet X has a much broader magnetic field than that of Earth and the magnetosphere simulator is designed only to trace the flow of magnetons to and from Earth's magnetic poles, we're only seeing half the picture. The below image, therefore, best characterizes what I would expect to see on the MagSim when the Last Weeks arrive, although its highly unlikely the MagSim will still be operational by then.

Please note also that this fixed end-to-end alignment is temporary since Planet X will assume a side-by-side magnetic alignment with Earth at it rises toward the ecliptic, moving between the Earth and the Sun in its retrograde orbit. 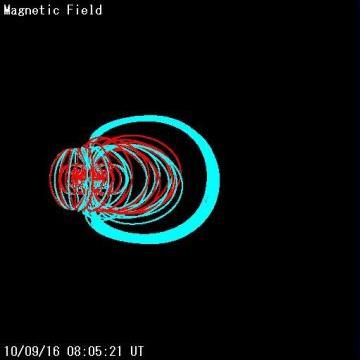