There was an article in the Daily Mail last night talking about postponing the election. [and from another] http://www.dailymail.co.uk/news/article-4569880/Calls-election-susp... Prime Minister Theresa May officially confirmed the election would proceed as planned in a major address from Downing Street after convening the emergency committee. [and from another] ‘They shouted ‘this is for Allah’, as they stabbed indiscriminately’ June 4, 2017 https://www.infowars.com/they-shouted-this-is-for-allah-as-they-sta... At shortly after 10pm, a white B&Q van being driven at speeds of up to 50 miles per hour mounted the pavement at London Bridge and ploughed into pedestrians, knocking them down. One eyewitness spoke of the men shouting “this is for Allah” as they stabbed indiscriminately. [and from another] 149 Dead So Far In Ramadan Attacks June 4, 2017 https://www.infowars.com/149-dead-so-far-in-ramadan-attacks/ Islamist terrorist groups usually use the holiday to mount more significant terrorist attacks, and promise their followers extra benefits for dying in such attacks during the holy month. The major attacks of Ramadan 2017 include twin suicide bombings in Baghdad and a massive suicide borne vehicle bomb in Afghanistan. An unconfirmed terrorist incident also occurred at a casino hotel in Manila earlier this week. These attacks occurred before a reported deadly incident on London Bridge Saturday. [and from another] Australia 'ready to assist' Philippines in Mindanao battle with Islamists June 4, 2017 http://www.smh.com.au/world/payne-australia-ready-to-assist-philipp... Australia stands "ready to assist" the Philippines as government forces battle Islamic State-linked militants in the country's south. The focus on terrorism coincided with a gunman who stormed and torched a Manila casino, killing 36 people, which has been claimed by Islamic State. [and from another] London’s New Mayor Warns Trump: Let In Muslims Or They Will Attack America 05/10/2016 http://dailycaller.com/2016/05/10/londons-new-mayor-warns-trump-let... The new Muslim mayor of London has issued a warning to Donald Trump: Moderate your stance on Muslims, or they will launch more attacks against America. While Khan touted the liberal values of British Muslims, some polls have found worrying indicators that their assimilation is incomplete. A poll in April, for instance, found that two-thirds of British Muslims would not tell the government if a friend or family member became involved with extremists. Half of them said homosexuality should be illegal and over 20 percent supported establishing sharia in the U.K. [and from another] Two Days Before Terror Attacks, London Mayor Called Global Warming ‘One Of The Biggest Risks To Humanity’ June 3, 2017 http://dailycaller.com/2017/06/03/two-days-before-terror-attacks-lo... Khan called global warming “one of the biggest risks to humanity” and pledged to work with other cities to meet the goals of the Paris Agreement, which is to keep future global warming below 2 degrees Celsius. 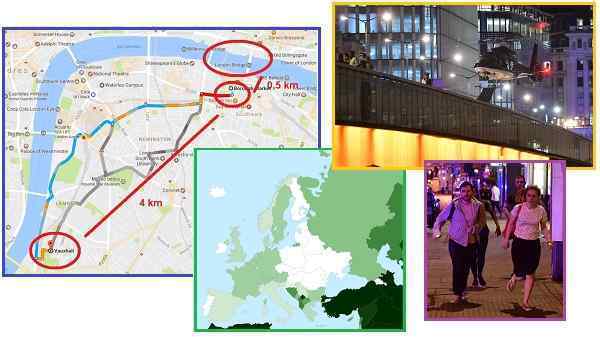 France was under ISIS attack two years ago, during the Charlie Hebdo and Paris attacks, due in part to ridicule of Islam by Charlie Hebdo and also to France bombing ISIS in Syria. Why then is the UK suddenly the prime target? It is true that the start of Ramadan coincides with these fervent attacks, and they have within the past few days occurred in the Philippines, Afghanistan, and Baghdad. But the UK suffered the Manchester bomb on May 22 and the London Bridge was attacked by a swerving driver on June 4.

Europe has recently had an influx of refugees, the vast majority of which are young men. They lack identification or carry false ID, and are almost entirely ISIS sleeper cells awaiting the call. Despite attacks to date seeming to come from long-term residents who have been radicalized, the real danger is still to come. We have warned that the plan by Erdogan and Merkel to control Europe in the future, via these ISIS soldiers, is still pending. The upcoming June 8 election, called by May to strengthen her hand re Brexit, would also strengthen her hand re anti-terrorism measures such as limiting immigrants and deporting suspects.

Europe is at a cusp. The arguments against deporting the refugees, sending them back to Syria or their presumed homeland, are countered by sympathy. There are those, such as London’s new Mayor, who openly state that anti-refugee measures will incur terrorist attacks. May is not expected to lose during the June 8 election, so delaying the elections, permanently, is the goal. In a country where the police do not even carry guns, it will require a major shift to get the upper hand. In the meantime, the UK will gradually become a police state.