White Cliffs collapse: Tonnes of chalk crash from world famous landmark into the Channel near Dover

But walkers have been warned to take care when walking along a stretch of the famous White Cliffs of Dover after tonnes of chalk crashed into the English Channel when part of the cliff-face sheared off.

A giant mound of clay was left on the shore near St Margaret's Bay after the collapse between between Dover and Deal in Kent. Landslide: Tonnes of chalk were left piled on the Kent coastline after part of the White Cliffs of Dover collapsed Warning signs: The collapse happened in St Margaret's Bay between Dover and Deal in Kent, and the National Trust has now put up signs telling walkers to beware further collapses in the area

Dover Coastguard said a bench and fencing which sat on the cliff-top were also sent tumbling to the base, prompting warnings to coastal walkers.

Fortunately, no one was hurt.

The collapse is thought to have been caused by a combination of high winds and rain freezing after being absorbed into the chalk and then expanding, causing the cliff to weaken.

A similar collapse saw a chunk of the cliff-face slip in March last year.

A Dover Coastguard spokesman said: 'There was a similar fall in 2012 but this one is smaller than that one. A bench and fence have gone down with it. Rubble: The National Trust, which owns the stretch of land said that the collapse was smaller than a similar one last March

A cracking view! Cliff-top beauty spot on Jurassic Coast sheared in half by landslip

One of Britain's best-loved beauty spots - the Jurassic Coast in Dorset - has had a tectonic makeover after a huge landslip sheared the clifftop in half.

The 150ft long crevasse, which opened up near Weymouth at an area known as Red Cliff Point, is believed to have been caused by heavy rain during the winter months.

Geology experts are now warning ramblers and dog-walkers to avoid area fearing it could crumble even more. Earth-moving: A 150ft crevasse has opened up along the Jurassic Coastline in Dorset

Deadly landslides and floods across Indonesia

Seasonal rains and high tides in recent days have caused widespread flooding across much of Indonesia. North Sulawesi province’s capital city, Manado in Indonesia, was hit by heavy rains that triggered floods and landslides on February 17, 2013 responsible for killing at least 17 people and evacuation 1,200 people. Manado area received 24 cm (9.4 inches) of rainfall during February 16/17, 2013. That was more than half of February average. A local river in Manado burst at its seems due to heavy rainfall, causing flooding of more than 1.000 homes. Local media reported floodwaters  a meter high in places. Water, which inundated around 5,000 houses in Manado, had receded by the next day and residents had begun cleaning up their homes.

Flooding hit areas of Riau Islands and forced around 21,000 villagers to flee from their homes as the Batang Buluh and Rokan Rivers in Rokan Hulu regency began to overflow. At least 3,452 people had been evacuated to safer ground. Indonesian capital Jakarta was also affected by heavy rains in January which caused flooding  that left 32 people dead and forced nearly 46,000 to flee their homes.

Indonesia is currently experiencing  wet season which begins in November and ends in April. Seasonal downpours cause dozens of landslides and flash floods each year in Indonesia, where millions of people live in mountainous areas or near fertile flood plains.

At least five people including two children have been buried under a landslide which swept over a village near a coal mine in southern China.

An estimated 5,000 cubic metres of rock fell over six sheds in the Yudong village in Kaili, in the Guizhou province of China at around 11am yesterday.

Those buried were believe to be miners and their families who worked at a nearby coal mine. Dozens of homes have been destroyed and hundreds of people fled after a landslide hit a Davao del Norte village, authorities said today.

At least 156 families were evacuated and are now staying at a village hall and provincial officials have sent relief goods for the affected families, according to Mayor Nestor Alcoran.

The mayor said experts from the Mines and Geo-sciences Bureau of the government's Department of Environment and Natural Resources have been sent to the area to conduct assessment as to the risk of more landslides.   Source

A very bad surprise yesterday morning, three residents of St. Aventine. They had parked their vehicles in top of the village, on a temporary car park. The slope located above the parking place, collapsed and literally swallowed vehicles.

Leon Tine, the mayor of St. Aventine, said " I fear that we are not out of the woods. I have never seen this before, a mudslide at such a place! "

Cazaril-Laspènes. Landslide: the house collapses on its inhabitants

A landslide caused rockfalls and destroyed a house. The slope collapsed and pushed the house to the river. There were no injuries but the occupants have lost almost everything. The scene is impressive: the mountain has smashed the door of the kitchen and literally bent the rear of the house, tearing the wooden slats. "It was about 22 hours on Monday night, frightened Catherine remembers. We were watching TV when I heard a huge crack like an earthquake. Windows were broken and we smelled a strong odor of gas. Then we wanted to leave the house but nothing could be opened! ". "I quickly turned off the gas and light, says Anthony, her husband. I tapped like crazy on the bedroom window untill it broke so we were finally able to leave the house. I thought for a moment that we would die. " One night the couple does not forget. They managed to contact firefighters which arrived on the scene about 23 hours. "The heavy rain and snowfall in recent weeks have softened the ground. The house is located in the town of Cazaril-Laspènes between the One and the pass road Peyresourdes. The slope collapsed and pushed the house to the river, "says Christian Mouret, the commander of the rescue center of Luchon. A tragedy for the couple who lost everything in just one night. "We live there for 35 years, I love it here. Now there is water everywhere, but summer is flowery, so pleasant. Firefighters were able to enter this morning and they were able to recover some cases, linen .... "Mayor Cazaril-Laspènes issued an order prohibiting access to the home. The couple took refuge with one of their three daughters. Starting Monday, the gradually deteriorating landslide has affected the life of 712 villagers in Zhongtun township, according to the Zhenxiong county government.

The landslide also damaged 928 houses in the county.

As of Thursday, no casualties have been reported, and the county government has implemented a geological disaster emergency response to the landslide.

The local government has sent professional rescuers to the sites and assisted the affected villagers to remove to safe areas.

On January 11, a landslide killed 46 people in Zhenxiong county, which is about 550 km northeast of the provincial capital of Kunming.

Holiday chalets worth £200,000 each on edge of cliff facing destruction after series of landslides put them at risk

Luxury holiday chalets worth millions of pounds could fall into the sea following a series of huge landslides triggered by heavy rain.

Some 18 wooden chalets - which cost up to £200,000 each - have been damaged or have slumped towards the cliff edge at Monmouth Beach near Lyme Regis, Dorset, after 500 tons of mud and earth pushed the buildings forward during the landslides.

The steady deluge has built up behind the cabins which are now precariously perched on the sloping cliff, with one even tilted up at a 30 degree angle. Disaster: The chalets at Monmouth Beach in Dorset are falling into the sea after huge landslides triggered by heavy rain

The landslide has rendered the stretch of Britain’s Jurassic Coast so unsafe it has been closed off to the public.

Lyme Regis Town Council, which owns the land, has also announced it will not renew the licences for 11 of the chalets and are asking owners to remove them as the area is no longer safe.

The buildings themselves are said to be worth up to £70,000 but the added value of the stunning location has seen some sell for as much as £200,000.

One owner, who wished not to be named, said: 'Some people are covered by insurance and some are not. Luckily for us our property is. This chalet worth £200,000 has been so badly damaged it could be pulled down before it falls into the sea 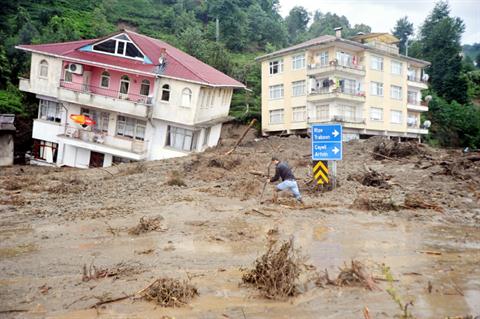 At least seven people were killed late Sunday when a landslide invaded the pitch at an amateur football game in southeastern Turkey, engulfing players and spectators, local sources said.