Various articles inre "Internet Apocalypse" Hmmm.  "By damaging the undersea cable network?" How does the sun affect undersea cables? [and from another] Science, Space, Health & Robotics Internet apocalypse: solar storm could knock internet out for WEEKS August 29, 2021 https://www.tweaktown.com/news/81367/internet-apocalypse-solar-stor... Planning for an Internet Apocalypse" found that local and regional Internet infrastructure could be hit but they would be fine -- the long undersea cables on the other hand, are at risk. The reason is that there are repeaters under the sea that connect the internet cables, at around 50-150km apart. The repeaters amplify the optical signal, so if there was a Carrington-style solar storm, the electronic internals of the repeaters would have their asses kicked. If enough of the repeaters were affected, it would make the entire undersea cable useless. [and from another] A Bad Solar Storm Could Cause an 'Internet Apocalypse' August 28, 2021 https://www.wired.com/story/solar-storm-internet-apocalypse-underse... The global internet is built for resilience. If one pathway isn't available, traffic reroutes across other paths, a property that could potentially keep connectivity up, even at reduced speeds, in the event of a solar storm. Foundational data routing systems like the Border Gateway Protocol and Domain Name System could start to malfunction, creating knock-on outages. [and from another] An “Internet Apocalypse” Might Result from a Severe Solar Storm August 29, 2021 https://www.techvisibility.com/2021/08/29/an-internet-apocalypse-mi... For a variety of reasons, undersea Internet cables are vulnerable to solar storm damage. Cables are installed with repeaters at intervals of 50 to 150 kilometers, depending on the cable, to keep data intact while it travels across seas. Like a relay throw in baseball, these devices enhance the optical signal to ensure that nothing is lost in route. While fiber optic cable is not directly affected by geomagnetically induced currents, the electrical internals of repeaters are, and a sufficient number of repeater failures will render an entire undersea cable useless. 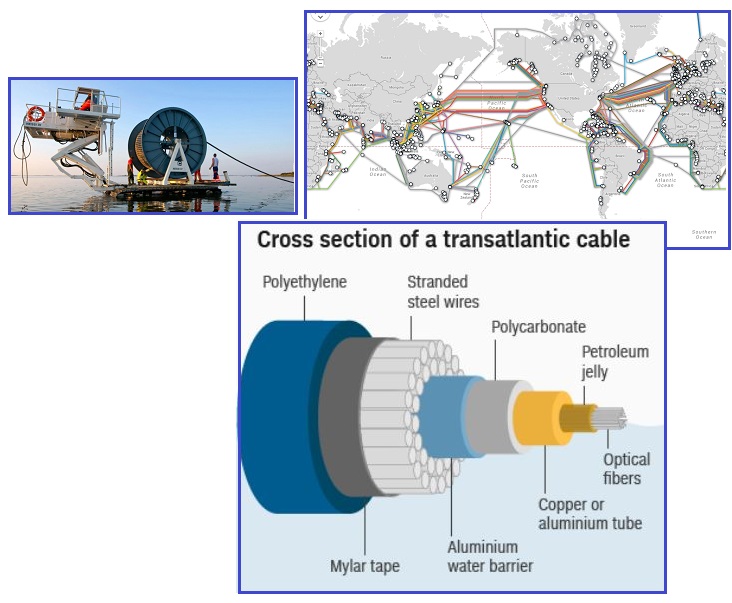 Although the warning in the study presented by Sangeetha Abdu Jyothi is focusing on undersea cables as the weak link in Internet Communications, it is land lines and satellite boosts that are in fact more vulnerable. Satellites are being bombarded by debris in the tail of Nibiru, and are subject directly to EMP blasts. Land lines also are as subject to EMP as mankind’s electrical grid, which suffers frequent blackouts. Why the emphasis on undersea cables, and why now?

Undersea cables have proved to be vulnerable during Plate Movements, pulled taut and then torn from their connections deep under the sea or where they emerge on coastlines to connect to land lines. This is of record in 2008 and 2011 for the long cable SMW3 that went through the Mediterranean and around India. In advising our Emissary Nancy when selecting the ZetaTalk Mirror Sites, we stressed that a reach by land lines for every continent was desirable. But Jyothi’s warning is not based on the threat from Plate Movements.

This warning is to provide cover when the establishment wishes to slow down the Internet to control chatter it does not want the public to read. Claiming that the undersea cables are vulnerable to EMP, with scant evidence, the establishment  could easily sabotage these cables by their connections, thus slowing down social media chatter on the Internet. As noted in her analysis, such disruption would affect more than just a single conversation. It would create a domino effect to disrupt the Internet altogether.