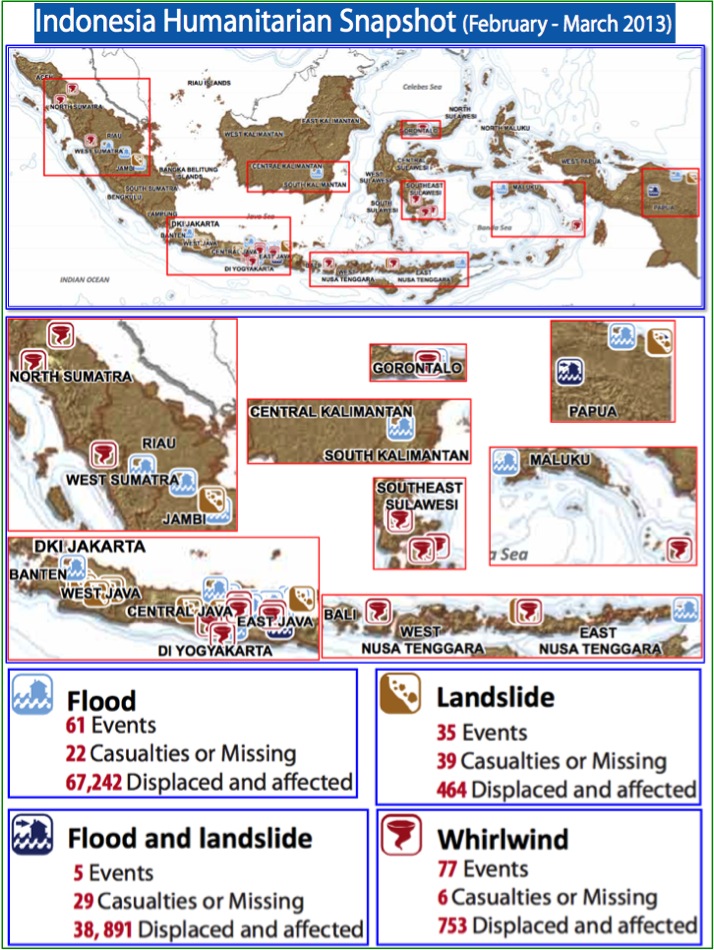 * Floods and landslides killed 22 people in North Sulawesi in February. About 4,220 houses were damaged, 3,832 people were temporarily displaced.

* Floods killed three people and temporarily displaced around 9,923 persons in Riau in February.

High rainfalls and extreme weather forecast by the Meteorology, Climatology and Geophysics Agency (BMKG) continued to wreak havoc over the past two months, but the number of events and their humanitarian impact is much less than December 2012 and January 2013. Flooding was the main cause of humanitarian emergencies with thirty- three flood events in February and 28 in March affecting or displacing 67,242 people, including 22 people killed or missing. Flooding damaged or inundated close to 10,347 houses, and nine bridges were damaged temporarily isolating several communities.1 DKI Jakarta, Papua, East Java and South Kalimantan were the worst-affected areas. Heavy rainfall also contributed to a high number of landslide events in populated areas. Thirty-nine people were killed or missing in 35 landslides in February-March 2013. Separately, in five incidences where landslides were triggered by flooding in populated areas, twenty-nine people were killed or missing and 502 people injured. North Sulawesi and Papua were the worst-affected areas.

Whirlwinds accounted for nearly a third of disaster events in February-March 2013. Most of the whirlwinds, and the most severe, occurred in February and numbers tapered off in March. Six people were killed or missing, 18 reported injured and some 3240 houses were damaged during the two-month period. Southeast Sulawesi, East Nusa Tenggara and Gorontalo were the worst-affected areas. A landslide in Bogor buried a house and killed a family of four, officials with the country’s disaster agency disclosed on Friday.

“The landslide happened at 4 p.m. on Friday afternoon. The four victims were already dead when they were discovered,” Sutopo Purwo Nugroho, a spokesman for the National Disaster and Mitigation Agency (BNPB), said Friday.

The victims’ bodies have been brought to Salak Hospital in Bogor.

Sutopo said the family’s house was located in a valley of Sempur village, located in the district of Central Bogor.

“The increasing number of people moving to the area drove people to build their houses in the landslide-prone valley. Many of the houses were built on the slopes near the Ciliwung river,” he said.

Sutopo said the high density of the area has limited structural mitigation efforts to prevent landslides from occurring.

“This is why Sempur village is very prone to landslides,” he said.

Sutopo added that Indonesians should remain alert of potential landslides due to extreme weather.

The Meteorology, Climatology and Geophysics Agency (BMKG) previously warned that heavy rains would continue until the end of April.

Women flee their homes on a flooded street in the Javan town of Bandung. Picture: AP

ELEVEN people have been killed and thousands forced from their homes this week by flooding on Indonesia's main island of Java.

Most of those killed were "swept away by floodwater", he said. Many whose homes were flooded fled to relatives' houses or sheltered in government buildings.

But the flooding had now eased in many areas and people were returning home, he added.

Indonesia is regularly affected by deadly floods and landslides.

Heavy rains caused flooding in the capital Jakarta in January that left 32 people dead and at its peak forced nearly 46,000 to flee their homes.

Eleven people have been killed and thousands forced from their homes this week by flooding on Indonesia’s main island of Java on April 12.—Photo by AFP