Nenshi spoke to media Sunday afternoon in a press conference from the Calgary Emergency Management Agency headquarters to provide an update after an underground electrical fire caused a power outage in a large part of the downtown core affecting approximately 2,100 businesses and 5,000 residents. 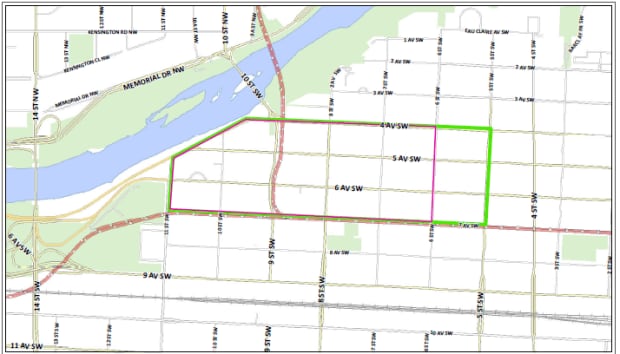 The areas affected by the power outage are outlined in green and the security perimeter is in effect in the area outlined in pink. (City of Calgary)

The estimate from Enmax is that power will be restored sometime between Wednesday evening and Saturday evening.

The damage from an underground fire in downtown Calgary Saturday night was extensive, "completely destroying" the electrical infrastructure involved, the utility company said.

Because of the extent of the damage, utility crews will have to replace not only the damaged part of the electrical system, but also many connecting parts from across the city.

The city has been issuing updates on the situation on its Twitter feed @cityofcalgary.

Early Monday, it said that the outage might result in low water pressure of water being cut off completely, especially in upper floor units. Water wagons have been deployed throughout downtown. A map of where each is located can be found on the city website.

The mayor said Sunday that employers in the affected area should tell their employees not to come into work on Tuesday.

He says the city will assess whether to advise other workers outside the affected area to also avoid coming to work downtown when the work week resumes after the Thanksgiving break.

"There will be major disruptions to the affected area until the infrastructure is rebuilt."

One of the buildings affected is the Calgary Courts Centre. It will remain closed until Friday. During that time, emergency applications will be dealt with by a Queens Bench justice at the Court of Appeal, which is in the TransCanada Pipelines Tower.

Nenshi noted that if employees needed to get into offices to pick up files or laptops, it should be arranged outside of rush hour.

Nenshi advised business owners to start implementing their business continuity plans, if they have not done so already.

Employers should be talking with their employees just as landlords should be speaking to tenants, he said.

While there are several evacuations underway for carbon monoxide buildup in parts of the affected area, only one person has been injured so far.

A nearby ATCO employee was injured in the fire and suffered minor burns, Enmax CEO Gianna Mannis said.

That employee was taken to local hospital for treatment.

Nenshi also urged Calgarians in the affected area to exercise good judgment given there is no power to ventilation systems.

In particular, he says people should not run generators indoors or keep their car running in underground garages because they could get sick from carbon monoxide poisoning.

Calgarians reaching out to help

Nenshi made a point to highlight the support Calgarians have been offering each other in light of the power outage.

"We again see the incredible spirit of the people who call this place home," he said, calling out the#YYCthanks hashtag on Twitter, where people are offering up showers, charging stations and food storage for those without power.

The fire has affected some landline 911 service. The fire damaged a fibre optic cable, though it wasn't immediately clear what services that may have disrupted.

The province issued a critical emergency alert Sunday morning at 10:07 a.m. local time to let residents know some landline phones in the downtown core will not be able to access 911 as a result of the outage.

However, the 911 centre itself is still working and anyone trying to contact dispatchers for an emergency is advised to use their cellphone or another person's cellphone.

Enmax says there are 1,900 sites with meters in 112 buildings that are without power.

Power was shut down to the area around Eighth Street S.W. and Fifth Avenue as a safety precaution, Enmaxsays.

The cause of the fire is still under investigation and Enmax says it is too early to estimate cost of damages.

A large section of the downtown core remains closed to traffic and it's not clear when it will reopen.

The areas closed are between Fourth Street and 11th Street S.W. and Fourth Avenue and Seventh Avenue S.W.

Traffic lights in the area were initially out, but power to those has been restored.

City officials are working with police to assess when roads can reopen.

Once that happens, traffic will be allowed to run, but will still be restricted around the electrical vault area where the fire broke out.

As well, C-Train service is back up and running in the core but several bus routes are detouring around the affected area.

Despite the outage, the City of Calgary says water quality remains high and people affected by the outage can still use water — if it is available.

The area of the outage contains many high-rise buildings and the lack of power may mean a loss of pressure and water supply to high-floor units.

City crews are getting ready to provide emergency potable water wagons for those without running water as needed.

There are no food donations required at this time.

The damage is different from what Calgarians saw one month ago after a freak summer snowstorm knocked out power to thousands.

Enmax says the snowstorm knocked out individual connections to each meter, while the fire has significantly damaged the underground system itself.

As repairs are made, Enmax crews will bring customers back onto the grid one at a time.

Nenshi says residents without power are being advised to unplug all electrical appliances and stoves to prepare for a power surge when their section of the grid is re-energized.

Nenshi is also urging Calgarians to reach out to affected friends and family to provide Thanksgiving dinner and a place to stay.

(Not in Calgary, but greater Toronto, Canada)

All over the Greater Toronto Area, including surrounding suburbs strange flicker in power supply. 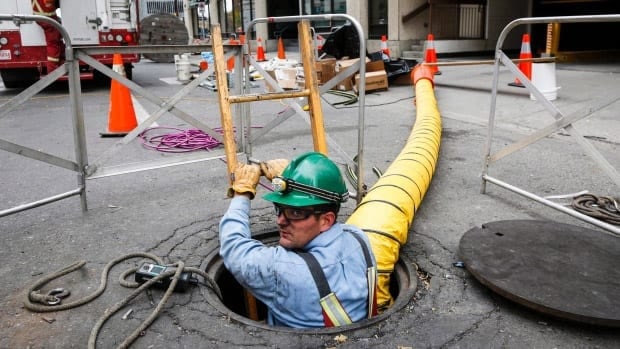 The lights came back on in downtown Calgary early this morning as power was restored to an 18-block section of the city’s core five days after a major electrical fire.

The blaze in an underground utility vault on Saturday night did extensive damage to the area's electrical infrastructure, cutting power to roughly 1,900 customers with meters in 112 residential and commercial buildings in the downtown west end.

The area was re-energized at 5 a.m. MT — several hours ahead of the midday timeline officials had set earlier in the week.

Crews with the city-owned utility company Enmax have been working round the clock to replace about 3.5 kilometres of electrical cable destroyed by the fire.

Residential property managers are being asked not to allow tenants to re-enter until their building systems have been inspected.

The city expects most affected businesses and other buildings, such as the Calgary Courts Centre, will be up and running on Friday.