Today I was in a meeting with manager of a large transport company in Queensland, Australia.  We were discussing the Poleshift, and a light bulb went on inside his head when talking about the earth wobble.

They have GPS tracking on all of their fleet of trucks, that travel all over Australia, however he realised in that instant, that the wobble was why at different times when they look at the location of different vehicles that are parked, and offline, that sometimes these vehicle are parked 50 kilometres out to sea on the Great Barrier Reef.

I am posting this as I am sure there are people on this ning that may be involved in companies that have similar information.  As the inaccuracy of placement of these vehicles shows the extent of the wobble.  I cannot get access to this companies data, and wonder if someone else can? through their own resources and contacts?

Being able to record on a spreadsheet the distortions, and watching them increase should give a fairly accurate idea of what is taking place... that is until the tail removes a satellite or two.

Fea - the top of the LISS heliplots display seismic activity that occurred roughly 23 hours from the latest update.  Thus, the activity you're referring to is most likely associated with yesterday's swarm of magnitude 5+ quakes in New Zealand which commences shortly before 18:00 UTC.

Please refer to the FAQ for a detailed description of how to interpret these heliplots.

Fea - The below heliplot from Station SNZO (South Karori, New Zealand) indicates movement at approximately 17:46 UTC on January 28th.  This coincides with a magnitude 5.8 quake that occurred in the Kermadec Islands, New Zealand at 17:42 UTC.  The seismic readings that are indicated on the heliplot for the next two hours or so are from aftershocks and harmonic tremors resulting from this quake, generally associated with magma displacement, sloshing back and forth as a result of the quake.  With powerful quakes, harmonic tremors will show up on most or all of LISS heliplots.

Since LISS heliplots are regularly updated and the readings scroll upwards over time, what you saw previously was the result of this 5.8 quake, sloshing magma and the quake aftershocks that were noted earlier.  A composite heliplot that combines both yesterday's image and the current image is provided below for added clarity.

GOES-12 satellite animation currently displays side-to-side rocking of the frame background, inferring the presence of a wobble, yet concealed by the static placement of the Earth map in the foreground. 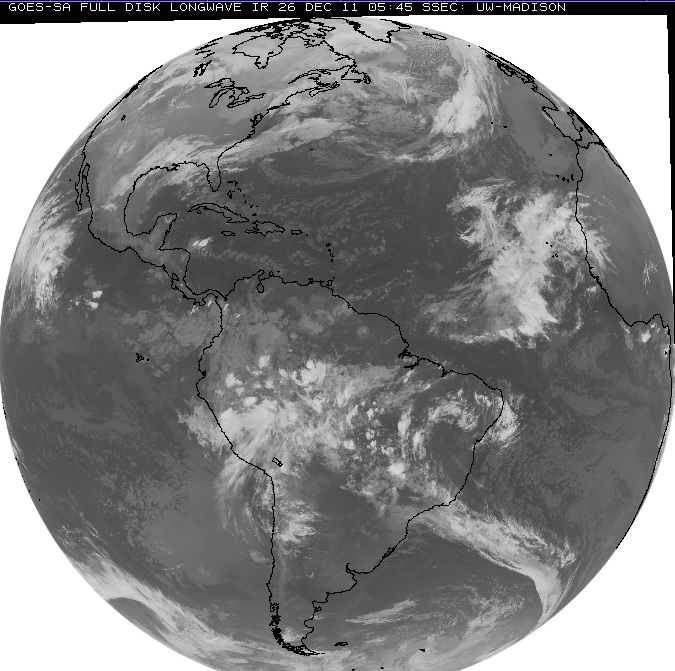