Earth Wobble Brings Seaweed from the Sargasso Sea into the Caribbean What is the Sargasso Sea?

The Sargasso Sea, located entirely within the Atlantic Ocean, is the only sea without a land boundary.


The Sargasso Sea is a vast patch of ocean named for a genus of free-floating seaweed called Sargassum. While there are many different types of algae found floating in the ocean all around world, the Sargasso Sea is unique in that it harbors species of sargassum that are 'holopelagi' - this means that the algae not only freely floats around the ocean, but it reproduces vegetatively on the high seas. Other seaweeds reproduce and begin life on the floor of the ocean.

Sargassum provides a home to an amazing variety of marine species. Turtles use sargassum mats as nurseries where hatchlings have food and shelter. Sargassum also provides essential habitat for marine species,such as shrimp, crab, and fish, that have adapted specifically to this floating algae. The Sargasso Sea is a spawning site for threatened and endangered eels, as well as white marlin, porbeagle shark, and dolphinfish. Humpback whales annually migrate through the Sargasso Sea. Commercial fish, such as tuna, and birds also migrate through the Sargasso Sea and depend on it for food.

While all other seas in the world are defined at least in part by land boundaries, the Sargasso Sea is defined only by ocean currents. It lies within the Northern Atlantic Subtropical Gyre. The Gulf Stream establishes the Sargasso Sea's western boundary, while the Sea is further defined to the north by the North Atlantic Current, to the east by the Canary Current, and to the south by the North Atlantic Equatorial Current. Since this area is defined by boundary currents, its borders are dynamic, correlating roughly with the Azores High Pressure Center for any particular season.

Meet The Seaweed Choking The Beauty Out Of The Caribbean

Sand fleas and stink are side effects of the epic sargassum influx.

It's brown, smells like rotten eggs and is a breeding ground for fleas. Welcome to the stinky Caribbean, choked by record amounts of seaweed.

Huge quantities of brown sargassum seaweed are burying the usually pristine beaches and coves of the Caribbean, The Associated Press reports. Tourists have canceled trips, and some lawmakers in Tobago have reportedly called the seaweed a "natural disaster."

Sargassum grows and floats in an area of the Atlantic called the Sargasso Sea. Sargassum mats are nurseries for sea turtles, and provide habitats for many marine creatures, according to the U.S. National Oceanic and Atmospheric Association.

When the seaweed washes ashore, the little creatures living inside it die, creating a putrid stink. Sand fleas breed in the piles, some of which are up to 10 feet tall.

It's unclear why there's so much sargassum this year. Researchers have suggested that rising ocean temperatures and increased fertilizer runoff may be factors.

Removing the malodorous mounds is a challenge. Tractors and heavy machinery can do the job, but they also remove s.... And then there's the matter of disposing of the tons of seaweed.

For now, the sargassum is piling ever higher. Check out the pictures below.

This summer may shape up to be the worst inundation of sargassum in recent time for Florida, writes columnist Frank Cerabino.

And if you don’t think seaweed can be an oceanfront menace, well, you probably didn’t go to an ocean beach in South Florida last weekend.

If you had, you would have seen the vast rolling carpets of that plant-like seaweed called sargassum rolling in with each wave, and covering the shoreline in a golden-brown collar where the water lapped the sand.

My wife and I like to take walks along the ocean shore, but for the first time, we gave up on Monday, finding it too daunting, with the seaweed sometimes rising to knee level as we slogged and squished through the deep carpet as new seaweed kept arriving.

LaPointe has been studying sargassum for decades. It only started being a coastal issue about eight years ago. And it has only gotten worse.

“It’s like what Richard Dreyfuss said in Jaws, about cutting off the shark’s food,” LaPointe said. “Same thing with this. The ultimate solution is to cut off the nutrients.”

Sargassum isn’t new. The Sargasso Sea in the North Atlantic was named after this seaweed by 15th Century European explorers.

Sargassum, the only seaweed that doesn’t begin life by being attached to the sea floor, can be beneficial to sea life in the open ocean.

But when it rolls ashore by the ton on tourist beaches, fouls mangroves, and kills coral reefs by robbing them of sunlight it becomes a nuisance.

This summer may shape up to be the worst inundation of sargassum in recent time for Florida. 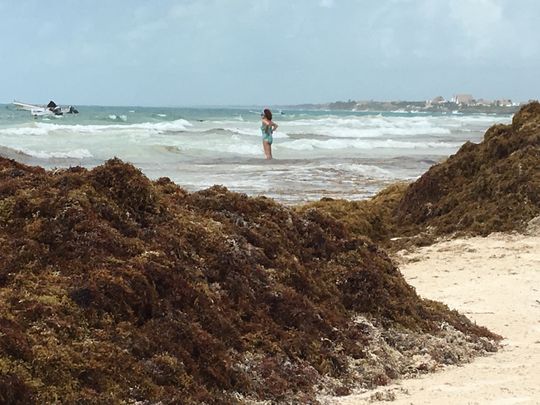 Tourists looking for sun and sand in Mexican resorts like Cancun, Playa del Carmen and Tulum have been disgusted by foul-smelling mounds of sargassum — a seaweed-like algae — piling up on beaches and turning turquoise waters brown, and experts are warning that it may be the new normal.

Mexico's Riviera Maya Caribbean coast provides half the country's tourism revenues and very little sargassum reached it prior to 2014. But a possible combination of climate change, pollution from fertilizers and ocean flows and currents carrying the algae mats to the Caribbean has caused the problem to explode.

While it may not have the global impact of melting of polar ice, the vast mats of sargassum filling the Caribbean could be one of the more visible climate-change events because of the sheer number of people who visit the region's popular tourist beaches, some officials say..."

Sargassum summit off after only 6 of 18 countries confirm attendance

Not even free accommodation and meals was enough to entice other countries faced with sargassum scourge
https://mexiconewsdaily.com/news/sargassum-summit-off-after/ An international summit to discuss strategies to combat sargassum that was scheduled to take place tomorrow in Cancún, Quintana Roo, has been postponed because only six of 18 countries that were invited confirmed their attendance.

Planning for the federal government-sanctioned Caribbean sargassum summit began months ago, and invitations were extended to government officials, members of the tourism sector and international sargassum experts.

The Quintana Roo government said the event was postponed because state elections will be held this Sunday but off the record, officials explained that the real reason was the poor attendance.

Earlier this month, the president of the Cancún and Puerto Morelos Hotels Association, Roberto Cintrón, acknowledged that “unfortunately, there are very few countries that have confirmed.”

Among those that did commit to attending were representatives from the United States, Nicaragua, the Dominican Republic and Barbados, according to media reports..."

Masterful presentation of the facts. Thank you, Derrick!