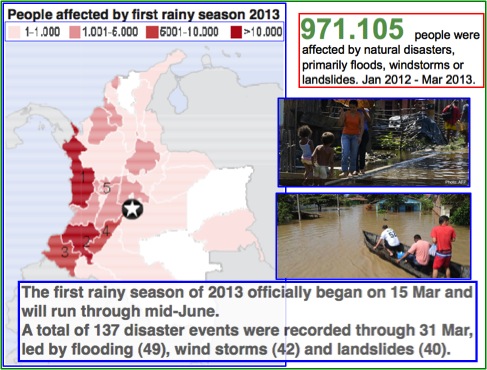 The first rainy season of 2013 officially began on 15 Mar and will run through mid-June. A total of 137 disaster events were recorded through 31 Mar, led by flooding (49), wind storms (42) and landslides (40). The majority of victims were along the Pacific Coast, particularly in Choco, were flash floods affected 56,770 people and damaged more than 500 homes. Thirty bridges and 100 water systems were destroyed. The Pacific Coast was strongly affected by flash flooding, with more than 50,000 people affected.

The first rainy season of 2013 officially began on 15 March and will run through mid-June. A total of 137 disaster events were recorded during the period 15 March – 31 March, led by flooding (49), wind storms (42) and landslides (40). The majority of victims were along the Pacific Coast, particularly in Chocó where flash floods affected 56,770 people and more than 500 homes. Thirty bridges and 100 water systems were destroyed.

The national authorities launched a major response. With the army’s support,5 emergency kits were delivered to affected zones, including more than US$3 million in food and non-food items.

The Local Humanitarian Team in Chocó led a needs-evaluation mission to the area. A sit rep was issued following the evaluation; urgent needs were identified in food security, WASH, and shelter and education. Food aid was delivered to the general area in a timely manner, but the logistical challenges of assisting affected people in Chocó are tremendous.

Most aid needs to be delivered via river, which increases costs dramatically. Some of the greatest concerns were identified in the early recovery component of food security, since most crops in the area were lost, affecting local livelihoods in the medium term. Natural disasters also occurred in south and north-west Colombia.6

The director of the Socorro Nacional de la Cruz Roja (Red Cross), Cesar Urueña, said first 15 days of heavy rains in Colombia have left one person dead, six wounded and some 50,000 people displaced from their homes.

Urueña explained that the rains between March 3 and March 19 affected eight departments (provinces), 15 municipalities, 665 houses destroyed and another 722 damaged.

“We call out to the Colombians to say to them that we have to prepare [for] the rains by monitoring the levels of the rivers and facilitate the evacuation of people from areas with high risk of disaster.

So far, the western Choco department has been the most affected by Colombia’s annual rainy season, which began in early March.

According to reports, between three and four of the department’s water aqueducts have been damaged due to the rains.

Risk Management said there are more than 53,000 affected by winter

The National Unit for Disaster Risk Management reported that cho departments or have been affected by the first rainy season of the year, among which stand out Chocó, Antioquia, Cauca, Huila, Boyaca, Cundinamarca, Sucre and Córdoba .
The latest report showed an impairment of 40 municipalities, 53,363 people affected, 12,560 families affected, 922 houses destroyed and 1,112 houses damaged. In total there have been 22 people injured in the events of the first days.
Chocó department remains the most affected by the rainy season, and that 15 to March 20 and 51,010 people have been affected, 544 houses destroyed and 294 damaged houses.
Next in order the department of Cordoba, with a total of 1,275 persons injured, 255 families affected and 255 houses damaged.
In Sucre, although no reports of people affected, risk unit indicates that there are 1,850 families affected and 370 homes destroyed and another damaged equal amount.
The National Unit for Disaster Risk Management said it has mobilized humanitarian aid for the department of Chocó, among which 2,000 are highlighted markets, 2,000 hygiene kits, 2,000 kitchen kit, 4,000 beds, 4,000 mosquito nets, 4,000 bedspreads, which represent an investment of 700 million pesos.
General Director, Carlos Ivan Marquez Perez, said they have allocated 100 million dollars for operating expenses and logistical coordination to occur in the region. 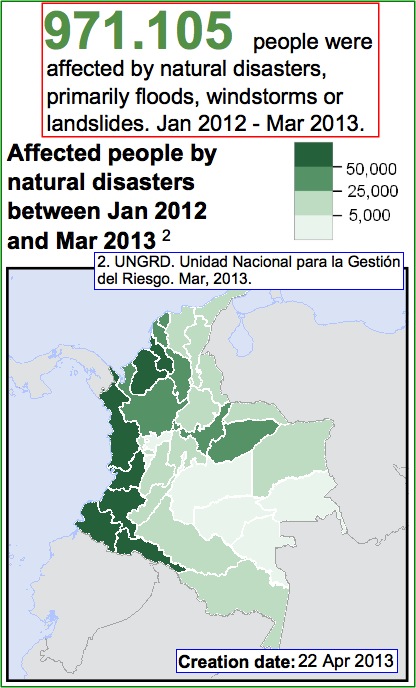 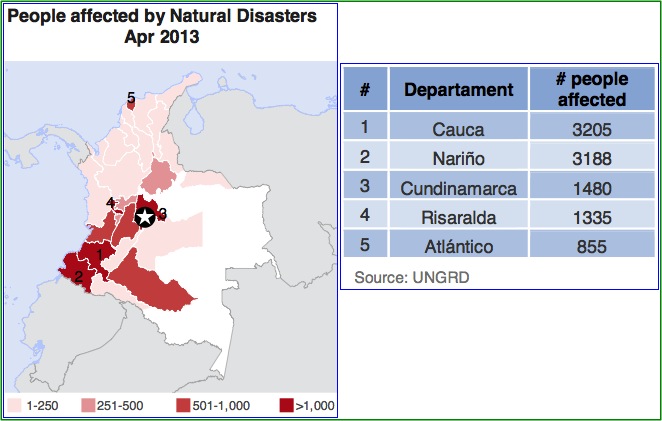 The first rainy season began on 15 March. While the beginning of April saw below average rainfall, precipitation picked up in the second half of the month. Partial figures for April show 13,800 people affected in 28 of 32 departments, with the greatest impacts on the Pacific coast in Cauca and Nariño, in central Colombia in Cundinamarca and in western Colombia in Risaralda. Nearly 3,000 homes were damaged. In April six volcanoes reported level III activity, leading the Colombian Red Cross to activate its Crisis Room in preparation for the possible eruption of Nevado del Ruiz volcano and to update contingency plans for that area. This volcano erupted in 1984 killing more than 20,000 people in a mudslide. A total of a half a million people live in the area of the volcano, with one hundred thousand classified at high risk.