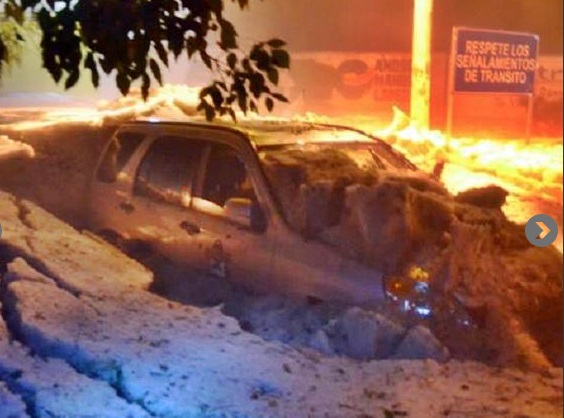 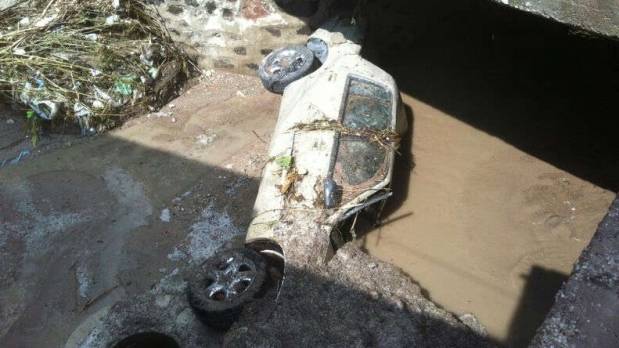 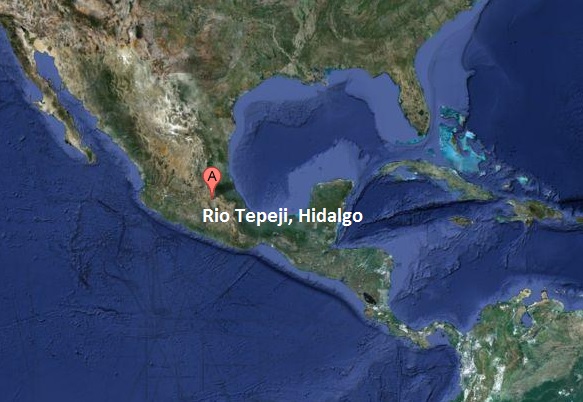 At least 22 vehicles were dragged into a canyon in the town of Tepeji del Rio, Hidalgo, following severe weather on Sunday that included a tornado and hail that accumulated up to 7 feet high.

Filiberto Reyes Villa, a resident of Tepeji del Rio, Hidalgo, said: "It started to hail and lasted one hour exactly, began to collect the water of the two canyons and began to bring the cars."

Fernando Miranda, mayor of Hidalgo, said: "We have approximately 15 damaged vehicles washed away, in total we estimate about seven communities affected."

"The house if you can see has feet of ice in them, it looked about two meters high," said Jorge Garcia, Tepeji neighbor River.

The neighbors were alarmed and climbed to roofs to escape the flood.

At kilometer 71 of the Mexico-Queretaro highway, a landslide buried 5 vehicles.

"Unfortunately, until now we have a report of seven people died in what is the highway," said Moctezuma Fernando Pereda, Hidalgo Government Secretary.

During the early hours of Monday authorities began assessing the damage.

Four people were injured after landslide in Mexico-Queretaro highway were taken to a hospital in Naucalpan, State of Mexico, while residents of Tepeji River cleanup done at home, as the whirlwind accompanied by hail damaged 150 homes and dragged at least 22 cars.

Yesterday, a storm, accompanied by hail, hit Tepeji River, causing severe flooding and mudslides. Hail and mud were introduced to several houses the San Francisco, in some of them up to five feet tall. 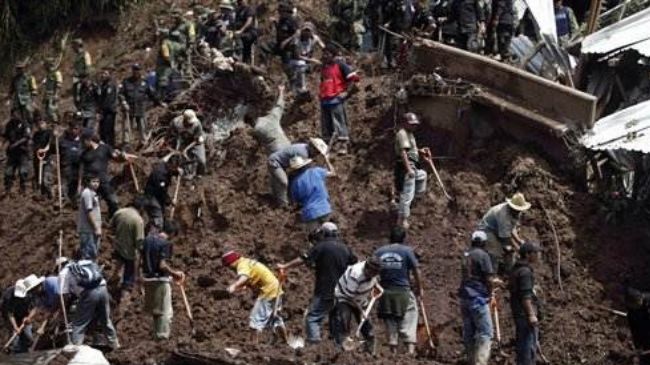 A storm with hail that fell last night in the town of Tepeji del Rio, Hidalgo, caused the landslide that buried a hill two vehicles and damaged three others that circulated on the Mexico-Queretaro highway.

The unfortunate accident occurred at kilometer 72 in the section known as River-Jilotepec Tepeji, Colonia Ejido del Carmen, in the direction of the City, federal police came and emergency units from different municipalities who were quick to search and rescue of victims.

Bulldozers and shovels were used by rescuers to reach literally vehicles were crushed.

For more than six hours Mexico-Queretaro highway towards the City was closed to traffic by the Federal Police car causing long lines that stretched for over 15 miles.

At 14:30 hours (local) on that Sunday, a Twitter user alerted Federal Roads and Bridges (Capufe) on the risk of breaking off on the freeway. "Between 75 and 74 km road Querétaro Mexico is about to break off (one) section of the hill to the lower rail," Ricardo Miranda tweeted.

Through a statement, said that yes Capufe inspected the stretch of highway that Miranda reported, but "at that time showed no signs of cracks or risks."

The agency said the landslide occurred in the area not reported through the social network. "The landslide was presented at km 70 +400, ie 5 miles from tweet sent".

The bottleneck for the accident on Sunday reached over 20 kilometers, said NOTIMEX.

In the rescue military involved at least 66 Federal Police officers, according NOTIMEX, while the area is cordoned off and vehicular traffic has been diverted.

Mexico City, May 27 (EFE).- Seven people were killed and four others injured when a mudslide buried part of the highway linking this capital with the central city of Queretaro, 213 kilometers (132 miles) to the northwest, Mexico's transportation secretary said Monday.

Heavy rain and hail Sunday night sent a wave of mud and rocks down the side of a mountain near Tepeji del Rio in Hidalgo state, Gerardo Ruiz Esparza said on Twitter.

Efforts to clear the highway are in progress, the secretary said.

Authorities closed the Mexico City-bound lanes of the expressway, a source in the Hidalgo state government told Efe.

Seven vehicles were buried in the mudslide, the source said, adding that several homes in the area were flooded.

They said a tour bus headed to the capital crashed on the Mexico City-Tampico highway near Corredor de la Montaña.

Hi, just as a note, I've been checking the latest news reports (in Spanish), and I can't find that there was a tornado. Since most of the sources come from Mexican newspapers it's possible that the translation system used "tornado" for the word "Granizada" which means Hail Storm.

This post was slightly edited, which is OK, but just wanted to point out that probably the word tornado is not as accurate, the damage with a tornado would have been far worse.

Recent updates include: Highway has reopened, Fire Fighters and military personnel are helping with the cleaning of houses, and unfortunately the number of affected households rose to 300.

Moderator Note: The tornado was reported in the following link:

"Four people were injured last night after landslide in Mexico-Queretaro highway were taken to a hospital in Naucalpan, State of Mexico, while residents of Tepeji River cleanup done at home, as the whirlwind accompanied by hail damaged 150 homes and dragged at least 22 cars."

It should also be noted that actual damage and fatalities resulting from Planet X-related Earth Changes are increasingly being minimized and downgraded to reduce alarm in the populace.

CHILE
Onemi estimated at 1,030 people affected and 604 hosted by the frontal system
Product of the storm, are 5 centers are arranged as a refuge from the agency announced.

SANTIAGO. - Front System product that is affecting the central and southern regions, the calculated this morning Onemi 1,030 604 affected individuals and those housed in various locations established by the authority for this.

This was reported by the agency head, Ricardo Toro, adding that so far there has been a total of 64 victims, 11-vivendas seriously damaged in the O'Higgins Region, and 802 homes with minor damage by the storms.

Regarding service delivery, Toro reported that 18,748 customers were affected by the power cut, mainly in the Valparaíso Region.

As to what is expected, confirmed Onemi Yellow Alert is maintained between the regions of Coquimbo and Biobío, while in La Araucanía and Los Lagos was declared Early Warning.

Onemi director highlighted the good coordination between the authorities to face the bad weather front. "The system has responded in great shape and has done the damage is worse than expected," he said.

And this, 3 feet of snow in New York State. This is late May, the end of May, and this just does not happen in the US.