Is it true that one of the reasons for the introduction of non-cash settlement in world comes from the IMF, Central Banks, Bush/Clinton family and etc. in order to delay migration in the future? Banks aggressively attempt to introduce non-cash settlements while limiting the amount of non-cash payments, etc. What else yesterday seemed like a terrible fantasy from the novel of Orwell and Huxley today seems like reality. Now we have Aadhaar (Aadhaar is the world's largest biometric ID system, with over 1.19 billion enrolled members as of 30 Nov 2017). The Government of India believes that this contributes to economic growth, etc. But they actually falsified economic growth! Just changed the method of calculating GDP in 2014. [and from another] https://www1.mastercard.com/content/intelligence/en/research/report... [and from another] https://www.worldpaymentsreport.com/reports/noncash [and from another] https://www.zerohedge.com/news/2017-04-08/will-trump-stop-plans-ban... Recently, the European Union announced it would start researching whether or not to put an upper limit on what cash can be used for… with the idea of implementing this policy in 2018. Spain, Greece, Portugal, and France are already banning cash for above certain amounts (usually €500 or €1,000). Others will be joining in this. [and from another] https://avpsolutions.com/blog/payment-cards-now-set-to-surpass-cash/ [and from another] https://www.zerohedge.com/news/2017-01-12/well-kept-open-secret-was... U.S. President Barack Obama has declared the strategic partnership with India a priority of his foreign policy. China needs to be reined in. In the context of this partnership, the US government’s development agency USAID has negotiated cooperation agreements with the Indian ministry of finance. One of these has the declared goal to push back the use of cash in favor of digital payments in India and globally. [and from another] https://www.imf.org/en/News/Articles/2015/09/28/04/53/socar022014a The IMF praised progress on tying India's social safety net to Aadhaar, India’s unique identification system. 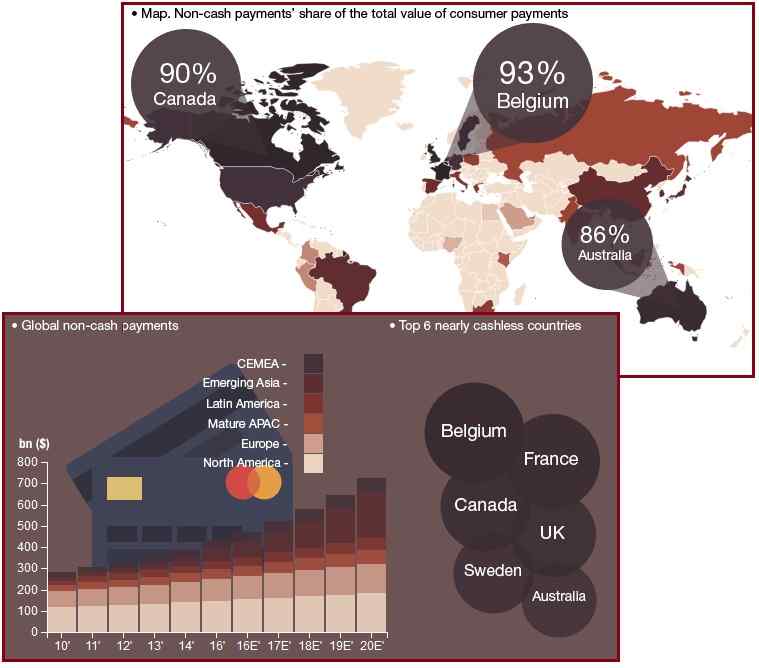 We stated in 2016 that India’s desire to hamper the use of cash by their working poor was a desire in the elite of India to prevent them from fleeing the country, thus drown during the hour of the Pole Shift. Has this maneuver spread to other countries, such as Canada, Australia, and countries in Europe such as France, Belgium, the UK, and Sweden? It should be noted that most of these countries are Commonwealth countries, under the influence of the Queen who is not someone looking out for the welfare of her charges.

Cash allows mobility, as the bearer can presumably go anywhere. It is direct, without needing the interface of a Credit Card company or bank for the transaction to complete. It also hides the identity of the bearer.  Those countries wishing to control the movement of their populace, and the ability of their populace to hide their activities, are increasingly trying to impose a cashless society. We have predicted that banks will restrict withdrawals from savings accounts, but it goes beyond that. Only electronic transfers to the approved Credit Card will be allowed, and then ID must be presented for use.

How does this fit in with the banking battles ongoing, wherein the International Monetary Fund (IMF) and World Bank are losing out to the BRICS consortium? The IMF was notable for creating debt slavery among individuals and impoverished countries. BRICS is the opposite, empowering by their loans and reasonable fees. It is not surprising, thus, that the push for cashless societies is strong among those in the West, who stand behind the IMF.  We have stated that the world will increasingly move toward a barter economy, not using paper money or Credit Cards or Cryptocurrency, but items to be exchanged.