As reported by the National Civil Protection System (Sinaproc), it is estimated that in Puerto Indio, Sambú county area, there are 187 homes affected, with a population of 400 inhabitants.

While in the area of ​​the settlers of the community there are 252 houses with 460 inhabitants, who suffered flooding.

In La Pita, in the same area, there were also 80 houses (610 people) affected by these rains.

Similarly, there were reports that several sectors of Jaque, El Coco, Los Llanos, and Mamey Biroquerá are also problems, but were not able to quantify the damage, because they are remote places.

Ronald Czech Sinaproc director in Darien, said it has activated a plan to get through the border police, can bring relief.

These effects are the result of 72 hours of heavy rains that occur in the Darien area, which have caused the rise in river levels, such as Chad. Reported losses in plantain, yam and others.

On the other hand, in the community of Los Planes, Baru district, an area bordering Costa Rica, until yesterday afternoon had reported that six houses were seriously affected.

Of these six, four were almost covered by water.

Nicanor Montero, area resident, said that families remain anxious about the rise of water level in the river Palo Blanco, where he formed a landslide dam product of a mountain.

Sinaproc units, as well as technical and engineering experts conducted a flyover on the afternoon of Saturday, to know the magnitude of the reservoir and thus failed to detect damaged homes, said the director in charge of Sinaproc, Abelardo Serrano. Jamaica
Heavy rains lashing the island for the past two days have left several areas flooded.

As the rains continued, the Meteorological (Met) Service issued a flash-flood warning for low-lying and flood-prone areas of all parishes.

Satellite images showed a large area of disturbed weather associated with a broad area of low pressure across the western Caribbean, including Jamaica. The Palisadoes main road in eastern Kingston was flooded and motorists travelling in small vehicles were warned to avoid the strip of land that was the only connection to the Norman Manley International Airport and Port Royal.

In St Thomas, several roads were left impassable. Motorists were advised to avoid Audley Crossing in Golden Grove, the Airy Castle to Bath main road, and Roselle in Morant Bay.

In St Catherine, motorists were not allowed to enter the Bog Walk gorge as the Rio Cobre continued to rise, threatening to overflow the roadway.

Meanwhile, the heavy rains and bad road conditions in the Johnson Mountain area of Eastern St Thomas almost claimed the life of a resident yesterday.

According to reports, Nicholson Gould, 32, was out in the rain repairing a broken pipe in his backyard when the heavy rains triggered a landslide. Gould was caught in the land slippage and a bamboo pole gouged his side and leg causing him to bleed profusely.

Residents rushed to his rescue but found him badly injured and slipping in and out of consciousness. They managed to get him from Johnson Mountain to Wheeler Field where they discovered that they were blocked in from both sides because of the rain and poor road conditions.

Residents sought the assistance of Dr Patrece Charles, the caretaker/candidate for the area, who contacted the Jamaica Defence Force and the Office of Disaster Preparedness and Emergency Management, who facilitated the injured man being flown to the University Hospital of the West Indies for treatment. 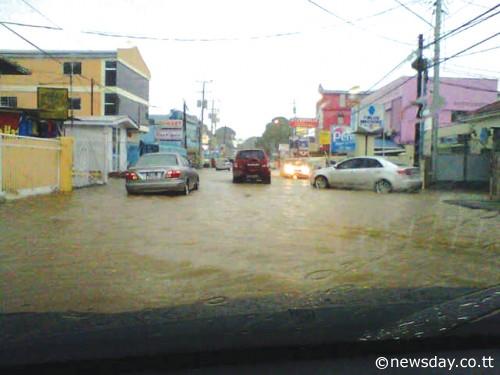 The showers — the result of an Inter-Tropical Convergence Zone (ITCZ) — led to swollen river courses and a forecast for further rainfall, according to a bulletin issued on the TT Meteorological Office’s website.

The Met Office said flooding will intensify in areas in close proximity to river courses, and urged citizens to be on the alert for rising river waters and possible overspill. It said all necessary measures must be taken to preserve life and property.

The Met Office said, however, that the country was not under any tropical storm threat, warning or watch.

Several parts of Northeast and Central Trinidad were under floodwaters on Saturday evening following 7 hours of heavy and consistent rains.

A bridge in Surrey, which is on the way to Lopinot, was reportedly washed away.

C News spoke to the CEO of the Office of Disaster Preparedness and Management, Dr Stephen Ramroop, who urged citizens to adhere to safety precautions in securing life and property. He said the ODPM will continue to monitor and provide assistance as directed by the Regional Corporations across the country. 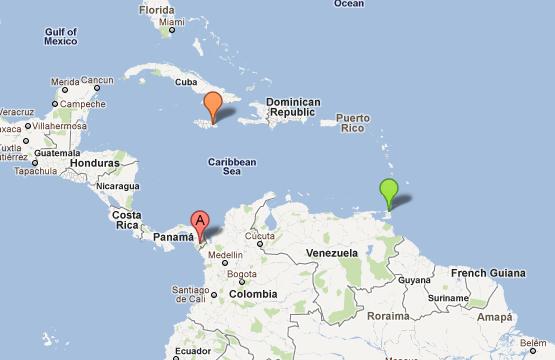