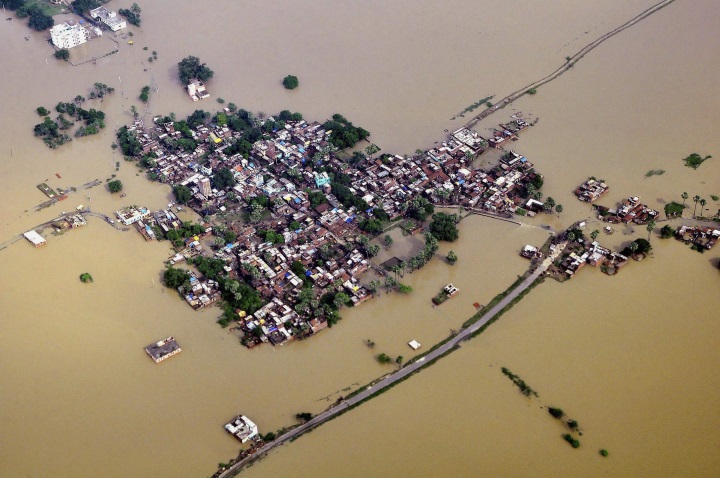 This Sunday, Aug. 17, 2014 aerial photo shows houses in a residential area partially submerged by monsoon floods at Nalanda district of Bihar, India. Rescue and relief operations continue in the state of Bihar after heavy rains caused landslides and floods in many parts of India. (AP Photo/Press Trust of India) Source: charlestondailymail.com 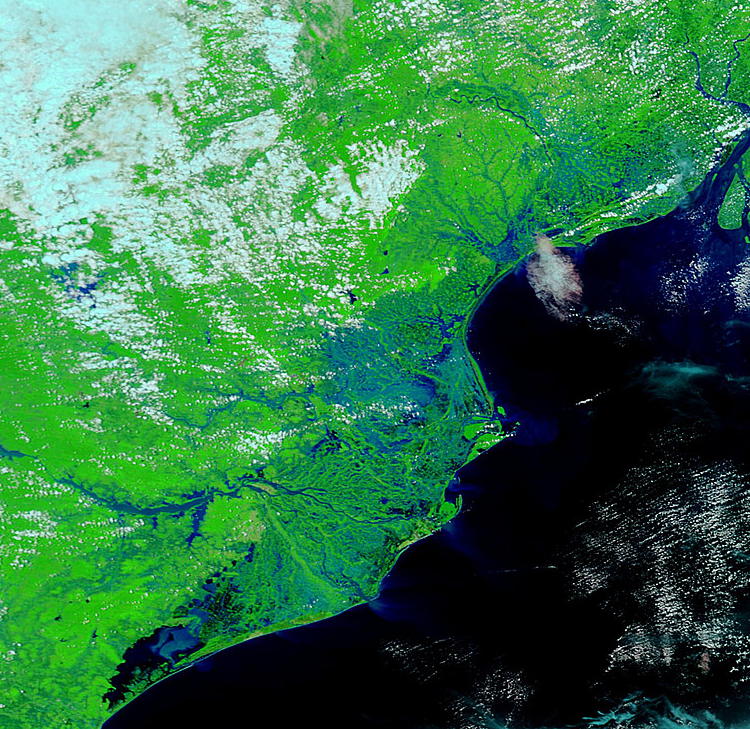 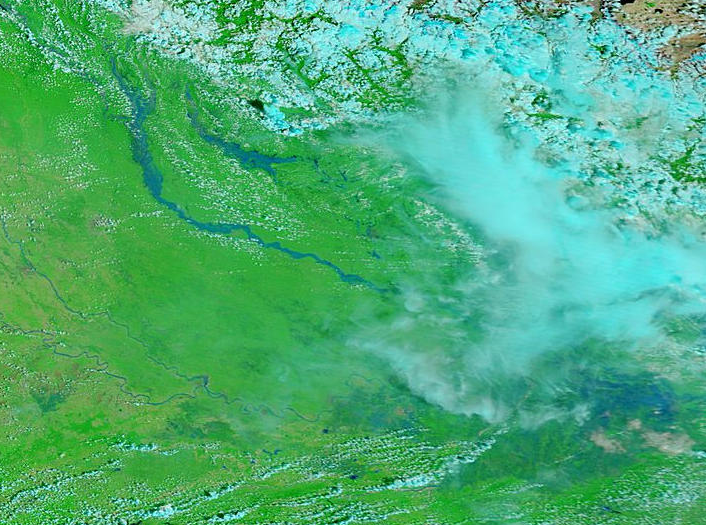 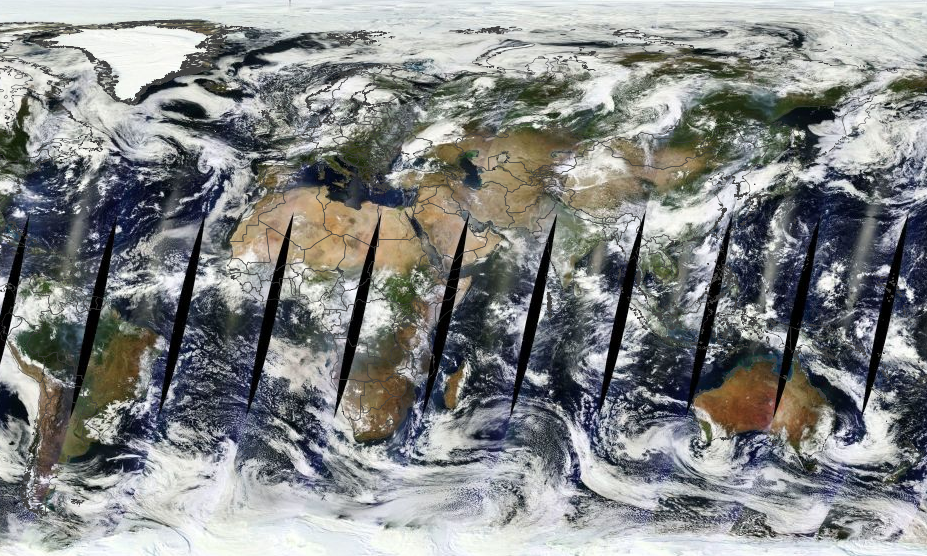 Heavy rain and floods have killed at least 45 people in the southern Indian state of Andhra Pradesh. Officials say up to 56,000 people have been displaced and moved to relief camps. Most people were killed when flash floods destroyed their homes. Any comment here? Another sign, perhaps, of the upcoming changes leading to the Shift?

India is sinking, the Indio/Australian plate tipping up at New Zealand and plunging under the Himalyas. This is disguised as a rising sea, an increasingly inundating tide, but the land is sinking. This will get far more serious before the pole shift, with sudden adjustments forcing massive evacuations.

Many districts in Uttar Pradesh continued to be in an 'unprecedented flood situation' on Tuesday with the river Rapti in Balrampur maintaining an alarming level. Source: banglanews24.com 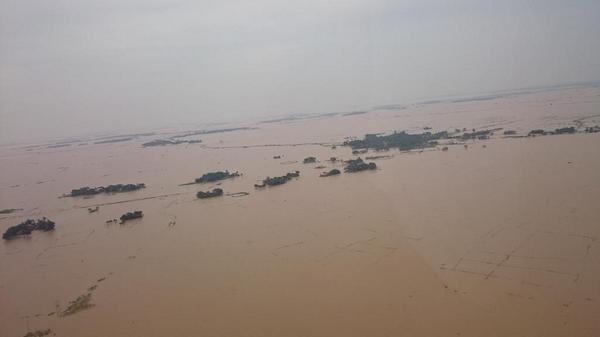 Flood waters entered into 100 villages in Jajpur and Bhardak districts where river Baitarani is on spate. Photo: AFP Source: thehindu.com

Some people there are saying the latest floods are the worst they have ever seen. Source: thehindu.com

Nepalese villagers carry a piece of cot they scavenged from amid the debris of Saturday's landslide in Mankha, about 120 kilometers (75 miles) east of Katmandu, Nepal, Monday, Aug.4, 2014. Nepalese authorities said there is no hope that more than 150 missing people are still alive after being buried by piles of rocks, mud and upturned trees. (AP Photo/Niranjan Shrestha). Source: aol.com The scene after a massive landslide in village Mankha, about 120 kilometers (75 miles) east of Katmandu, Nepal, Sunday, Aug.3, 2014. Nepalese officials say there is no chance of finding any of the more than 150 people, who are believed to have been buried by the early Saturday landslide in northern Nepal. (AP Photo/Arpan Shrestha) The Associated Press Source: foxnews.com

A Nepalese Army helicopter flies over the site of a landslide during a rescue operation in Sindhupalchowk area, about 120 kilometers (75 miles) east of Katmandu, Nepal, Saturday, Aug. 2, 2014. A massive landslide killed at least eight people and blocked a mountain river in northern Nepal on Saturday, causing the water to form a lake that was threatening to burst and sweep several villages, officials said. AP Source: newsinfo.inquirer.net

Floods in the Indian state of Odisha have killed 45 people, leaving 3.5 million people homeless and struggling to find the basic necessities of life, state officials said on Tuesday. “Though there has been very little rainfall in the state in the past three days, over 294 villages are still inundated leaving more than three million people homeless in the state. The water has started to recede in many of the rivers, but it is going very slowly, adding to the misery of the people,” special relief commissioner P K Mohapatra told Gulf News over the phone. Source: gulfnews.com

Another 136 people are missing, and authorities are battling to prevent an outbreak of cholera after some survivors showed symptoms of the potentially fatal disease.

Twelve people lost their lives in the Himalayan state of Himachal Pradesh, while nine people were killed and 40,000 others evacuated in Bihar state, which borders Nepal's eastern plains, officials told AFP. Source: reliefweb.int

Many districts in Uttar Pradesh continued to be in an 'unprecedented flood situation' on Tuesday with the river Rapti in Balrampur maintaining an alarming level.

Hundreds of villages in Balrampur, Bahraich, Lakhimpur and Shravasti were under water throughout the day. Situation in many districts of Bihar and Assam too remained grim. Source: reliefweb.int

22 August, 2014. Deadly Nepal floods leave thousands homeless. More than a hundred people are known to have died in Nepal in recent flooding and landslides caused by torrential rain in the area.

Many thousands have been left homeless and are staying in temporary shelters.

Some people there are saying the latest floods are the worst they have ever seen. Source: bbc.com 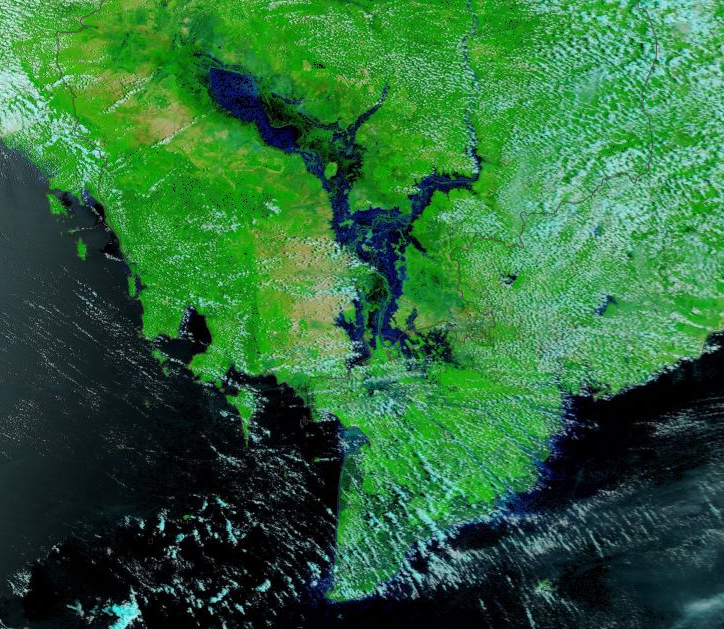 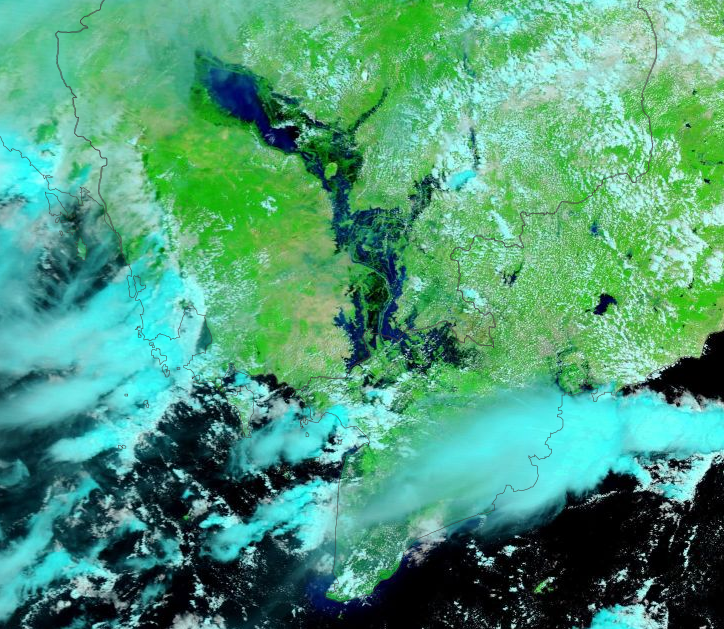 Officials say floods in Cambodia have killed at least 45 people since last month.

Cambodian fishermen catch fish in the Mekong River during the rainy season, near Phnom Penh, Cambodia Aug 17. More than 45 people have been killed by floods during the country's rainy season this year and more than 10,000 families across 12 provinces have been evacuated from their homes to escape rising floodwaters, according to the National Committee for Disaster Management. (AP photo)

The National Committee for Disaster Management says 11,500 people were also forced from their homes by the flash floods along the Mekong River.

The agency said Thursday that the deaths and displacements were caused by heavy rains.

The floods have affected 12 provinces in the north and northeast since July 30. Source: bangkokpost.com 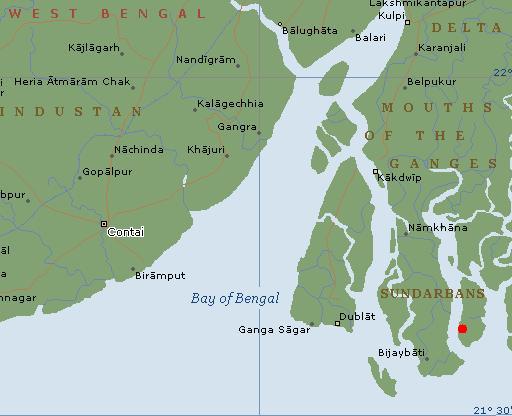 KOLKATA: Are climate change fears coming true in the Sunderbans? An unexpected high tide has left a major portion of Sagar Island flooded, leaving environmentalists worried about its future.

Sea water gushed into the island through Muriganga river on July 14, causing extensive damage to crops and destroying homes. Around 10 villages were affected and they continue to be submerged by the untimely rise in water level, which could have been triggered by a change in climate in the region, fear experts.

It is usually the shara-sharir baan (neap tide) that hits Sunderbans twice a year — in April and September.

But it rarely triggers a flood. This sudden influx of water was not neap tide, say locals and experts. It was much fiercer and struck at least two months ahead of the neap tide, they say.

"It could be the result of climate change since the water level has been rising in the Sunderbans.

Nothing like this has ever happened in 70 years so people were not ready for it. Paddy cultivation and betel plantations — the main sources of livelihood in the island — have been severely affected.

The fields are still under a foot and half of water and salinity has reduced soil fertility.