The collapse of a construction crane in downtown Seattle on Saturday has left four people dead, four people hurt and six cars pinned under it.

Two others who died were in separate vehicles. Three of the dead were males, one was female.

Firefighters arrived after the victims had died.

The three patients who were hurt in the collapse were taken to hospital.

A mother and her four-month-old child were hurt and taken to hospital, but they’re believed to be in “satisfactory” condition, according to the Seattle Times.

Another was treated on scene and not transported, the fire department said. The crane collapsed at about 3:30 p.m. PT, at Fairview Avenue North and Mercer Street in the city’s South Lake Union area.

Mike McCuaig, transportation chair with the South Lake Community Council, said the crane was being dismantled when it collapsed.

“The construction crane on the top of the building was being dismantled this afternoon and my understanding was in the process of dismantling, the crane fell to the ground on the south side of the building,” he said.

A secondary crane was helping with the dismantling, he added.

Winds were also blowing at the time that the crane fell but it’s not clear whether that was a factor in the collapse, The Seattle Post-Intelligencer reported.

One of the people injured was a 27-year-old man in serious condition, another was treated at the site of the collapse.

The collapse happened at a building that was set to house a new Google Seattle campus, as well as over 100 new apartments, the Times added.

Construction was to wrap up later this year, after having started in 2017.

Seattle had 60 construction cranes as of January, more than in any American city.

Washington Gov. Jay Inslee tweeted that his “heart goes out to the family and friends of the four people who died in this terrible accident.” 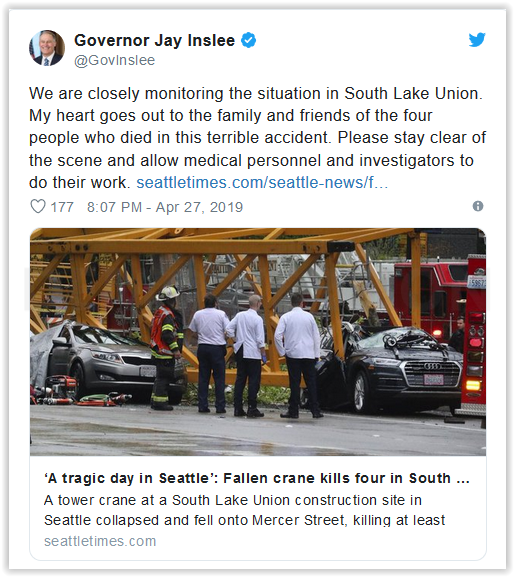 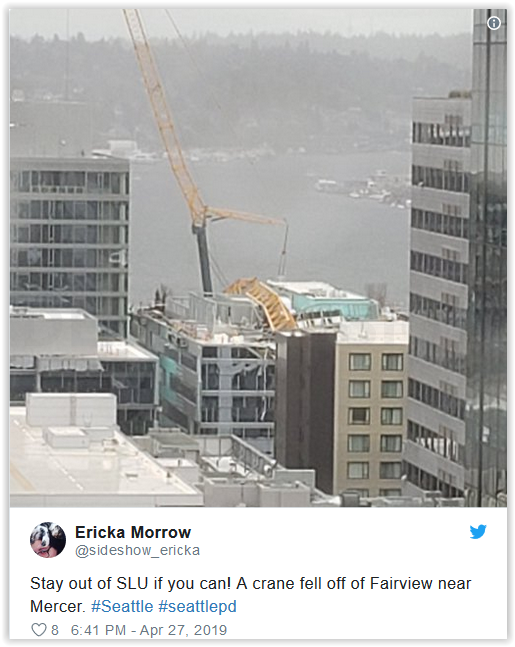 A crane threatens to collapse in the 16th arrondissement of Paris rue de l'Assomption, in the 16th arrondissement of Paris, after the collapse of a road on April 12, threatens to collapse a crane. BERTRAND GUAY / AFP

The collapse of a road near a construction site led the fire department to evacuate several buildings on Assomption Street.

Several streets of 16 e of the district's capital were closed at the beginning of the day for all traffic after the firefighters intervened to evacuate six threatened buildings. The danger of collapse would have been averted with relief at 12 noon, according to Le Parisien but now it is a crane installed on the site and its walkway collapsed and could fall on buildings at

worked to consolidate a mistake that has occurred on the plate of the crane, so the location of the France Bleu radio. Residents got a message in the early afternoon that they should not expect to be able to return home during the day.

Early on Tuesday morning, a crane collapse at an offshore platform in the Aegean killed one platform worker and injured two seafarers, according to Italian oil major Eni.

The accident occurred on the Barbara F platform, which is located about 30 nm off the coast of Ancona, Italy. The crane was carrying out cargo operations over an OSV, and when it collapsed, it struck the vessel below, injuring two people.

The wreckage then slid below the surface, taking the crane operator with it. A dive team from the Ancona fire department found the operator's body in the submerged crane cab, which remains suspended by cables from the platform structure.

The Guardia Costiera identified the victim as Mr. Egidio Benedetto, 63. Local media reported that he had decades of industry experience, and he was due to depart the platform tomorrow. The injured seafarers were both evacuated to the Torrette di Ancona hospital, and their injuries are not life-threatening, according to local media.

Prosecutors in Ancona have launched an investigation into the circumstances of the accident, and are considering the possibility of culpable homicide (manslaughter). Initial reports suggest that a structural failure may have been a contributing factor.

In a statement, Eni said that it has "immediately started checks to shed light on the dynamics of the event and is giving the maximum cooperation to the coast guard, to the port authorities and to the fire brigades supporting them in the work for the safety of the area."

According to community Facebook Page Westdene and Sophiatown CROWS, the crane was laying slabs at a construction site opposite the petrol station on the corner of Perth and Lewes streets.

It fell over around 21:00, just missing the garage.

There was no major damage reported and no injuries, the group said on Facebook. 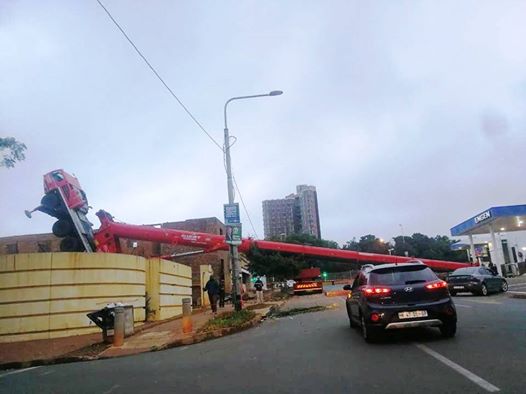 At around 21h00 the crane that was laying slabs on the construction corner Perth and Lewes toppled over. Missing the garage . No major damage and no injuries . The mayor was contacted and will send a team out. Road is blocked. Crane hiring team and contractor on scene

Four workers were killed and five others injured when the top part of a crane broke off and fell on them at a condominium construction site on Bangkok’s Rama 3 Road on Wednesday afternoon.

The fallen part hit the fifth floor of a building in the Lumpini Park Riverside project. Four male workers were killed on that floor and another five injured

A worker said he heard a loud noise followed by a large volume of dust appearing. He looked up and saw that the top part of the crane had broken off.

Officials have yet to investigate the cause of the accident 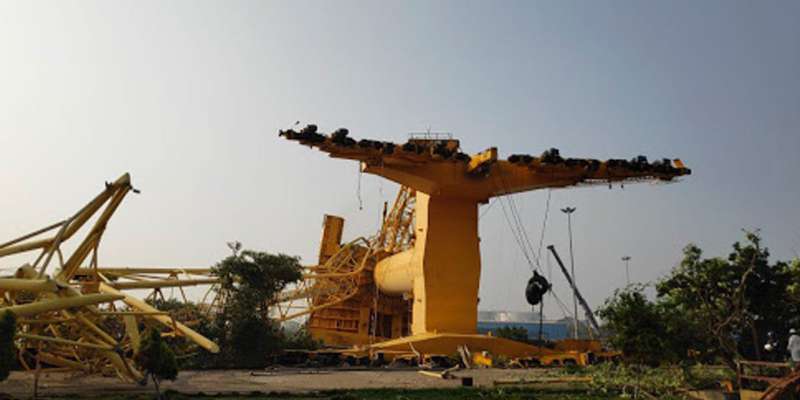 One person died on the spot and six more sustained sevre injuries when two cranes belongs to SPLcompanny were engaged in work in Kakinada Deep Water Port on Saturday morning.
According to information available the deceased Vattipalli Lakshmana Kumar hail from Kovvur in West Godavari. The six injured were shifted to Trust.Hospital for medical aid.

One Person Killed after Crane Collapse 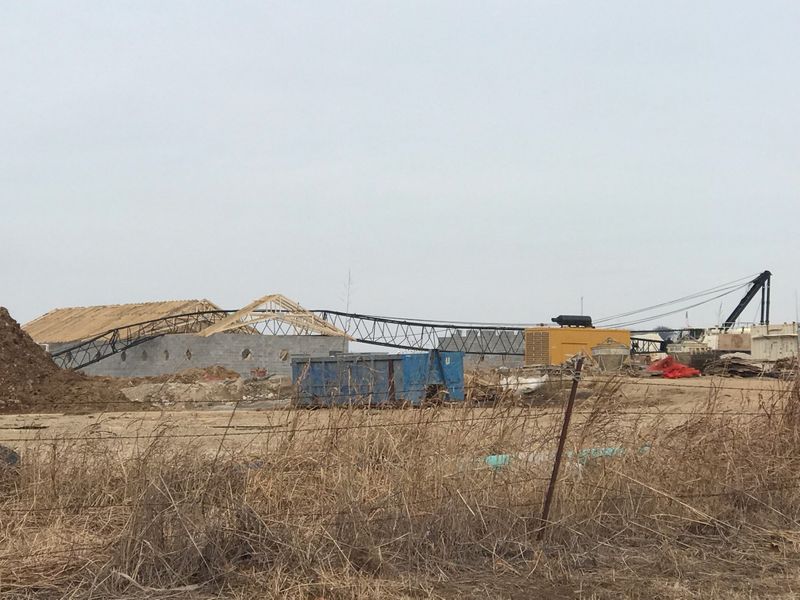 A man is killed after a crane collapse south of Fredonia, KS. According to Wilson County Sheriff Pete Figgin, deputies were called Friday morning about a possible on site work related accident.

The location is the new site of the Fredonia Water Treatment Plant that is being constructed.

Upon arrival, officers discovered two adult males with injuries. One male died from his injuries, the other male was treated for minor injuries.

The cause of accident has not been determined, according to Sheriff Figgin. OSHA has been contacted for further investigation.

The Wilson County Sheriff's Office expresses condolences to the families of those involved.

Isla Mujeres, Q.R. — UPDATED: One person has died in a construction accident after a jib crane collapsed at the Majéstic México Hotel site on Isla Blanca.

The collapse of the crane killed one and left several injured at noon Thursday when someone called Emergency 911 for help. Reports say emergency rescue personnel and ambulance staff were made to wait more than 20 minutes outside the site after being refused entry to keep the news of the accident in-house.

However once inside, they found one of the two on-site jib cranes had collapsed, falling over, injuring workers in its path.

The exact number of injured are not known, however the deceased has been identified as 32-year-old Julio C.C.M. who was the operator of the crane.

Officials of the Directorate of Civil Protection also arrived at the construction site to investigate the reason for the collapse of the metal structure as well as question why access to rescuers was denied.

UPDATE: Civil Protection and Urban Development Directorates of the Municipality of Isla Mujeres have closed the construction site of the hotel.

In a statement, they reported that after a review of the site, closure stamps were placed by personnel from the state agencies on part of the City of Isla Mujeres for further inspection and reporting.

6 Dead As Crane Collapses In Under-Construction Factory In Karnataka

The crane collapsed at an under-construction cement factory in Kalaburagi 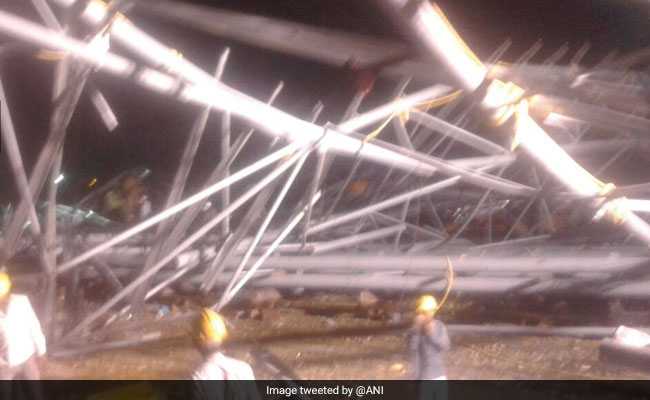 A crane collapsed at an under-construction cement factory in Kalaburagi in Karnataka on Thursday, leaving six dead and one injured.

Police have reached the spot and rescue operations are underway. The six workers who died are reportedly labourers from Bihar. According to the Propaganda Department of the Five Fingers Group municipal Party committee, at 11:20 on May 17th, a tower crane collapsed during the demolition of a tower crane in the construction site of Five Fingers Group, Hainan. The accident caused 3 deaths on the spot, 1 people were killed in hospital and several cars stopped near the tower crane were pressed. At present, relevant departments are organizing on-site rescue work, and the cause of the accident is still under investigation. (CCTV reporter Yang Tao Ye Feizhong Huaxia) 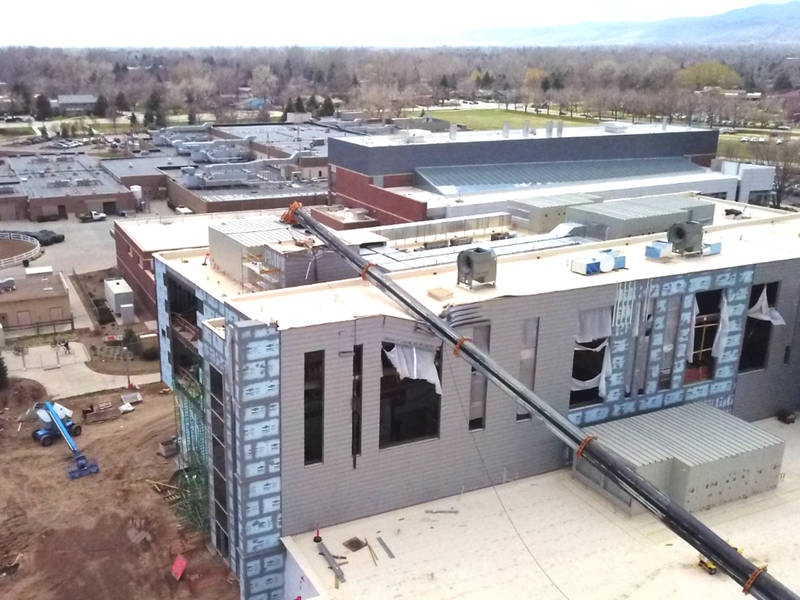 FORT COLLINS, CO -- A construction crane collapsed onto the roof of a building on the campus of Colorado State University's Veterinary Hospital campus in Fort Collins on Monday. No injuries were immediately reported when the crane fell onto the roof of the building being constructed at the College of Veterinary and Biomedical Sciences.

The building is being constructed by Silva Global Solutions northeast of the veterinary hospital at 300 West Drake Road.