DAISHAN, Zhejiang, Aug. 10 (Xinhua) -- The death toll from a flood that occurred Friday morning following a dam breach in the city of Zhoushan in east China's Zhejiang Province has risen to 10, local rescuers said.

The 28.5-meter-high dam of the Shenjiakeng Reservoir, a rainwater pooling dam in Daishan county, collapsed around 5 a.m., officials said.

Provincial authorities have vowed to make all-out efforts to locate the missing. An expert team has arrived at the site to repair the dam, they said.

Zhejiang has been lashed by downpours over the last few days with the arrival of typhoon Haikui, which landed in the province early Wednesday morning before moving into neighboring Anhui Province.

All dams will break either during the pole shift or in the months leading up to the hour of the shift. Look at the structure of the dam! It assumes that rock holding both sides of the dam will remain in place and not move. Of course these sides will move. This is a subduction zone! There is mountain building and even where the mountains are not being pushed upward, they are moving from side to side. Some parts are more fluid than others, which are more resistant during any earthquake thrust, so there is inevitably movement to the side. They will pull apart, slide forward or backwards, but in any case the water will find its way around the dam.

Thousands of people have been evacuated to safety in eastern Germany after a dam burst on the swollen River Elbe and  farmland was flooded in an attempt to spare towns, with meteorologists forecasting more rain.

In Magdeburg, one of the oldest cities in eastern Germany and a regional capital, about 23,000 people were asked to leave on Monday as water levels in the Elbe rose to a record 7.48 metres - about 5 metres above normal and surpassing the level reached during devastating floods in 2002.

There have been at least a dozen deaths as a result of floods that have hit Germany, Austria, Slovakia, Poland and the Czech Republic over the past week.

Officials said more than 8,000 people were evacuated from towns and villages around Aken, south of Magdeburg.

A dam at the confluence of the River Elbe and the River Saale south of Magdeburg burst despite attempts to stabilise it.

A dyke was also breached, and a crisis unit said the high waters were likely to put further pressure on dykes in the coming days.

In total, more than 36,000 people have been evacuated from their homes in Saxony-Anhalt.

Some residents were also moved from Brandenburg, a largely rural state that surrounds the capital Berlin, and flooding of uninhabited areas was planned.

In Hungary, dykes had been strengthened at critical points to protect the capital Budapest from flooding, as the Danube rose alarmingly.

The deluge reached Hungary on Friday but so far authorities, soldiers and thousands of volunteers have managed to defend the villages and towns along the river, piling more than three million sandbags beside its dykes.

Back in Germany, officials have estimated that the damage from the floods could amount to $8bn.

"We'll do everything humanly possible when it comes to reconstruction. Germany is sticking together in an admirable way at the moment and it should stay like that," she said.

Along with citizens and emergency services, about 11,000 German soldiers were helping to fight the flood waters on Sunday.

A baby is rescued in northeast China after a road collapsed claiming the lives of two people, according to state media. 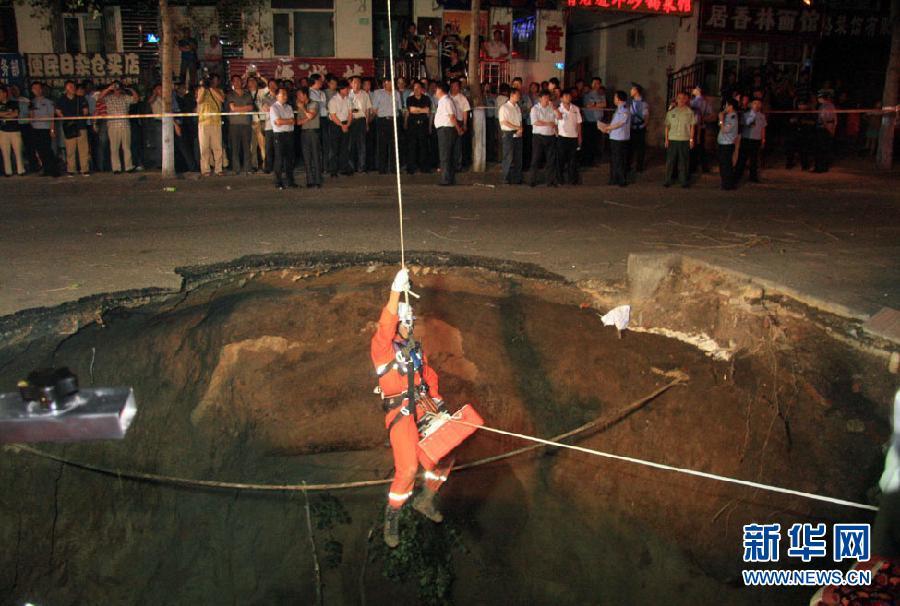 The collapse, which occurred at 4pm local time, opened up a 33-foot deep crater on a street in the city of Harbin.

A major dam collapse that occurred around 5 am on Friday morning has killed 10 people and injured 27 others in Zhoushan, Zhejiang Province. The Shenjiakeng Reservoir, which has a storage capacity of 180,000 cubic meters, collapsed following heavy rains brought by typhoon Haikui in Changtu township, Daishan county. The official death toll released by the Daishan county government on Friday afternoon listed eight locals and two others from Hunan and Yunnan provinces. Most victims were aged over 70, with at least one of the injured in a critical condition. Those injured are receiving treatment at the Daishan First People's Hospital and Daishan Hospital of Traditional Chinese Medicine. The county government said 80 homes were affected by the dam collapse, and one-third of Changtu's villages were flooded. Many homes, most built of timber, were destroyed after dikes of the reservoir located on a hillside burst, causing water to gush downstream. An employee at the Haifeng Hotel in Zhoushan confirmed the dam burst over the phone to the Global Times, but the line was later cut. A Zhongduan village committee official surnamed Dong told the Global Times that nearly all leaders of affected areas had arrived at the disaster scene. "They left around 5 am. All leaders who could go joined the rescue," Dong said.

However, a Sina Weibo microblogger under the name "Qiuxiaoqiu Zero" said in a post that no official arrived at the scene until after 6 am. According to her post uploaded at 6:26 am, homes had been submerged and no rescuers were visible. In addition to leaders from the county's Party committee and local government, emergency services personnel and medical workers are among the 850-strong rescue crew at the scene, the county government said. The hardest-hit villages are Houxia and Jiujiantou, both of which are located just several hundred meters from the dam, Dong told the Global Times. Typhoon Haikui, which made landfall in Zhejiang Province on Wednesday morning, cut electricity from 15,000 homes in the county, according to the local government. Authorities inspected dams before the typhoon struck to ensure they could manage the heavy downpours, daishan.com, a local official news portal, reported on Wednesday. The news portal also reported on Thursday, when the typhoon had passed, that Wang Wei, head of the county's Party committee, requested all departments check and reinforce flood discharge facilities at reservoirs to prevent dam bursts. The Shenjiakeng Reservoir is a small-sized dam that isn't managed by local authorities.

From the Great Wall collapse in Beijing, to Hong Kong bridge down, these things are all in eastern China where the crust is thin. Per the Zetas, this  region will be subject to bending as the Sunda Plate etc continues 7 of 10 completion. That's the pattern here!