Simple Stovetop or Campfire Water Distiller You Can Buy Or Adapt Amazon (and probably other places) sells the VKP Brands Stainless Steel Water Distiller and there may be other companies who produce the same or similar item.  There are three layers to this arrangement of stacking pots.  The water to be distilled goes in the bottom pot.  The second pot has a raised portion with a hole in the top of it, through which the steam pass.  The top pot is for cooler water.  When the steam hits the bottom of the top pot, it condenses and drips down into the second pot.  It can be retained there until it reaches and inch or so in depth, or it can be allowed to run out of a tube.

The tube of such unit is (or should be) made of good, food-grade silicone and last for years.  You can also buy replacement tubing.  I bought ten feet of it the other day for under $20.  I believe this sort of tubing has generally been improved over the the years.  However, in the case of using this distiller over a fire, I'd probably use a cooper pipe instead, so there isn't the risk of damage by fire.  Or just plug the outlet and empty the distilled water by pouring it out.  To do this, you would remove the top pot, then the second pot.

I like this product because it is non-electric and can be used over any heat source.  So, it's fairly foolproof and, presumably, will last for decades.

It's very similar to steam juicers of this type and steam juicers can also be used to distill water.  Just replace the top pot (in the juicer models, this pot is full of holes) with a large bowl of water.  Ideally, I would choose a stainless steel bowl and one which rests nicely slightly inside the second pot and fits well, so there isn't large cracks for the steam to escape through.  This bowl serves the same purpose as top pot in the distiller model.  It acts a condenser.

Whether using the distiller model or the juicer model, the cooler you keep the top water, the faster you can distill water.  So, you can dip heated water out of either and replace it with cooler water, or lift the whole thing off, dump it and replace the water.  A steam juicer may also distill a bit of water without exchanging the top pot for a bowl, but at a very slow pace.  In other words, the trick to faster distillation lies in speedier condensation.  The colder the condenser is, the more steam you can produce and turn into drinkable water.  To produce more steam, turn the burner up or make the fire bigger.  In general though, you will usually use a lower heat setting.  Distilling water takes time. 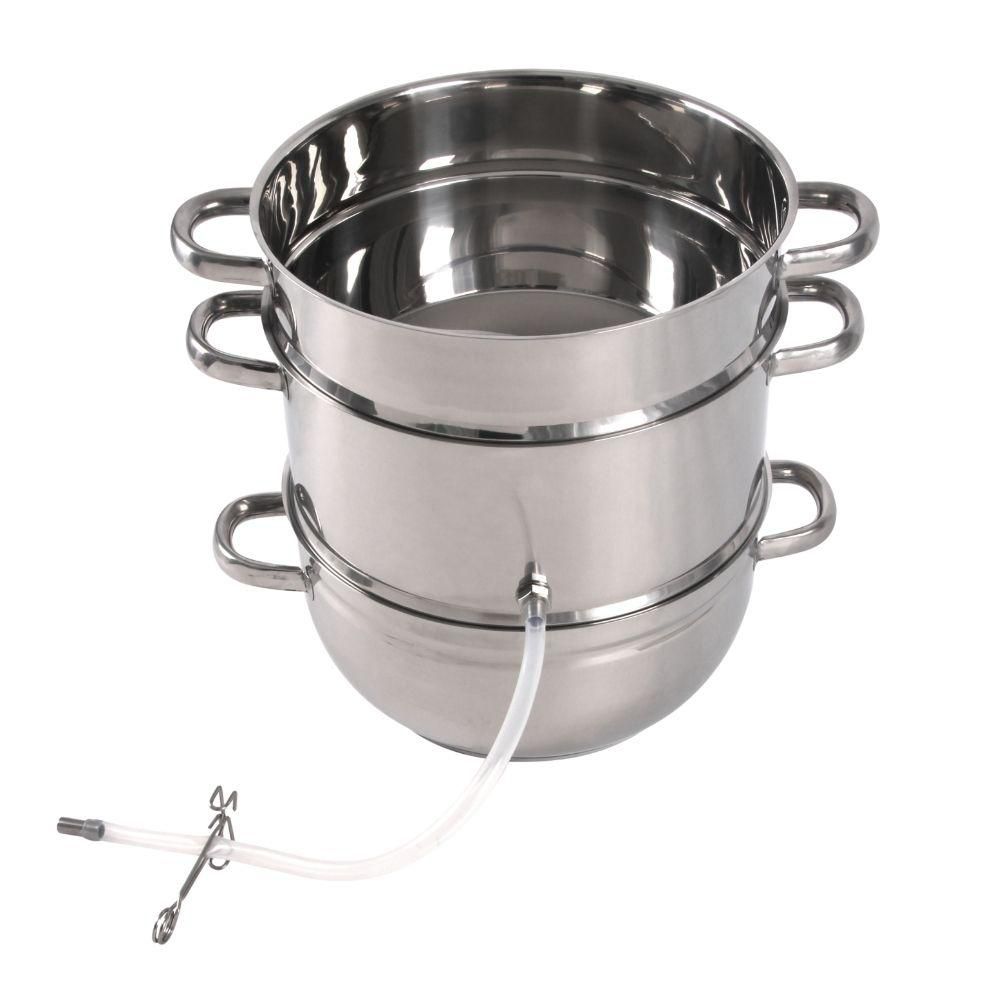