"We warned at the start of ZetaTalk, in 1995, that unpredictable weather extremes, switching about from drought to deluge, would occur and increase on a lineal basis up until the pole shift." ZetaTalk 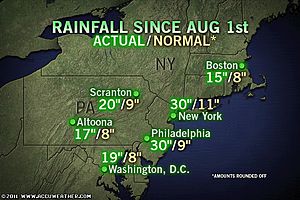 Wet weather and flooding are causing more than headaches in the Northeast this fall; they are inhibiting the harvest and resulting in lower yields.

Farmer Bill Baker in Covington, Pa. says this is the wettest he has seen it since 1972.

Baker has come to realize a saying his father, in the farming business since 1955, made was true. "A dry year will scare you to death, but a wet year will starve you to death."

The Baker family has weathered many dry and wet years in the Northeast.

This year, Baker and many other farmers in the Northeast were having difficulty getting equipment into muddy fields and moving machinery around to harvest corn this fall.

Last year rainfall was close to normal (about 22 inches) spanning May 1 through Oct. 15. This year during the same period, rainfall was nearly double the normal amount for the area.

Wet weather in the Northeast since the latter half of August has caused the corn crop to be water-logged, and some of the crop is moldy. The corn has simply not dried out enough on its own during the last part of the season.

"We are finding that this year's corn crop is about 33 percent water, compared to an average of 7 percent over the years," Baker said.

The corn must be dried mechanically prior to being sold. The more water is lost during the drying process from the initial weight, the more there is a loss of profit for the farmer.

Some farmers in the Northeast are now having issues with the corn stalks tipping over in the soggy soil to the point equipment cannot harvest the crop.

When corn contacts the ground, it runs the risk of being contaminated and subject to rot. This fall, some of the corn kernels have even been resprouting because of the wet weather.

Baker said that the recent week of sunny, warm weather and advanced forecast of the same helped the crop a bit and helped planning the harvest a great deal.

"We were able to let the fields and the corn dry for a few days and still had some time to get out there and harvest thanks to forecasts by AccuWeather," Baker added.

The Baker Family Farm was not flooded, unlike those of less fortunate areas in the Northeast this season, and uses all their corn as silage to feed their cows during the rest of the year.

When a field of maturing corn or other crops is flooded, it is considered to be contaminated by the United States Department of Agriculture (USDA) and the Food and Drug Administration (FDA). As a result, the crops cannot enter the food supply of humans or animals.

Federal assistance is available for those farmers whose crops were under water from Irene and Lee.

In Pennsylvania, marcellus shale gas drilling companies were buying up moldy bales of hay and using them as mulch around their operations. That is allowing some farmers to make money on a crop that would normally not be usable.

The United States has a peanut shortage this fall and soon peanut butter prices will jump around 30 percent.

Drought was the main obstacle for peanut growers this year. Tiffany Arthur, an agricultural economist at the U.S. Department of Agriculture's Farm Service Agency, said that in Texas, the air was so dry that irrigation water would evaporate before the water could reach the plants. The Texas peanut yield is down 17 percent.

Though not as bad as Texas, dry weather affected farmers in the state with the nation's biggest peanut crop, Georgia.

"I've never seen a year wherein we suffered from planting time, all the way through the growing season," said Hawkinsville, Ga., farmer Rodney Dawson. "I've never experienced a season like this in 41 years."

The dirt "is just hard, really hard. [It's] just like powder, no moisture at all," Dawson said.

Worse, the bad news isn't over for the peanut farmers or peanut lovers, Mohler said.

Another part of the problem is that cotton prices were high around planting time, so farmers planted cotton instead of peanuts. Planted acres for peanuts went down 11 percent this year.