Wave#3 started with a magnitude 7+ quake at Acapulco, Mexico on September 8 and another underwater explosion at the Pemex gas fields which lie at the origin of the New Madrid Fault Line. Other than sympathetic quakes right at New Madrid, the reaction was more quake swarms on the mainland portion of the N American Continent. This included quakes in Mexico, West Texas, Oklahoma, and peppered above the Seaway in Canada. Remarkably, the SE Portion of the N American Continent was quiescent. Wave#3 appears to be mainly focused on loosening up the Seaway. The Zetas explain.

ZetaTalk Confirmation 9/30/2021: After Wave#1 of the New Madrid unzipping occurred in May, we stated that the SE Portion that will rip away from the mainland of the N American Continent was hanging on by a "tenuous strip of land" from Ohio to the Seaway exit. The main portion of the N American Continent wants to slide into the Pacific so that the bow stress is relieved. This slide has resulted in many quakes and tears along minor fault lines in West Texas and Oklahoma and Mexico and quakes in Canada above the Seaway.

On September 10 the SE Portion of the N American Continent had a deep quake at the Bahamas. Then also on September 10, reminiscent of the Minnesota Bean Field rupture, there was a stretch zone methane release just west of Madison, Wisconsin. This is the upper Mississippi on the mainland portion of the N American Plate stretching in both directions. Wisconsin Launches Probe into Methane Plume Spotted from Space
September 17, 2021
https://finance.yahoo.com/news/wisconsin-launches-probe-methane-plume
Wisconsin is investigating a methane plume that was spotted by a satellite last week. The state launched a probe after being contacted by Bloomberg News about a plume of methane detected in southwest Wisconsin by Kayrros SAS, which relied on a Sept. 10 satellite observation from the European Space Agency. The geoanalytics company estimated an emissions rate of 30 tons of methane an hour was needed to generate the release.

ZetaTalk Confirmation 9/30/2021: If the Wisconsin DNR knew the responsible party for this methane plume, the party would have been mentioned in the articles. At most, the general location to the West of Madison can be gauged by the satellite image which has an overlay of roadways, and indicates the plume happened in lowlands between ridges. This aligns with the Wisconsin River coming down from the Dells to join with the Mississippi. This was a stretch zone release. The I-35 bridge that snapped at Minneapolis in 2007 was a similar adjustment in the upper Mississippi.

Then on September 11 a quake occurred directly in the Gulf at the deep hot spot that lies beneath the signal buoy that throbs when the New Madrid is unzipping under the Gulf waters. Simultaneously on September 11 Alabama had a quake where the East Coast Fault Line branches off from the New Madrid. Buoys at the mouth of the Seaway showed that the Seaway was widening. The widening Seaway caused a collapse of a Cannabis dispensary and a heaving road in Detroit on September 12. The ground heaved due to the expanding Seaway. 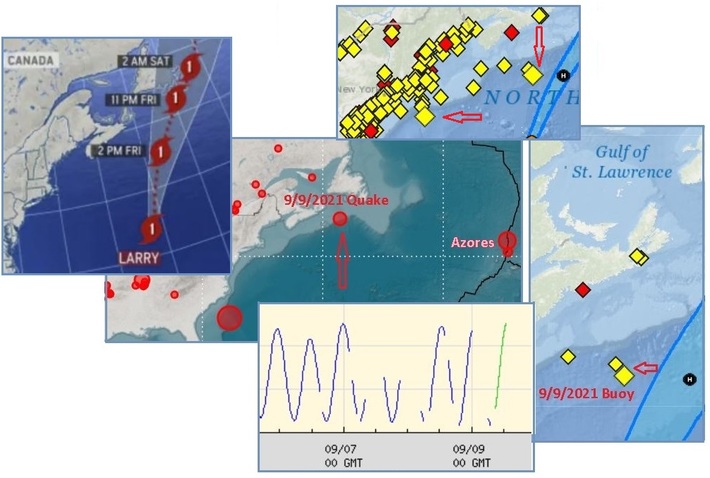 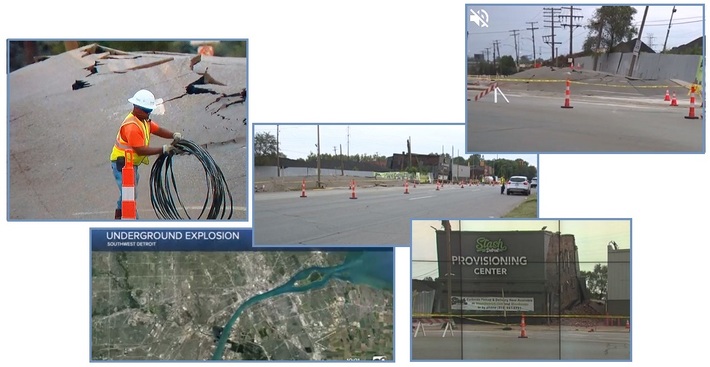 Cannabis Dispensary Collapses Overnight
September 12, 2021
https://www.wxyz.com/news/region/detroit/i-thought-we-were-having-a...
A cannabis dispensary in southwest Detroit is in ruins after some kind of explosion caused the building to collapse. Currently, DTE is working to repair electrical infrastructure that was impacted by a water main break. Officials say at this point there is no evidence to suggest this incident was caused by natural gas. it only took 10 minutes for destruction to unfold; falling bricks from the side of the building and now a gaping hole next door.

Road Buckles in Southwest Detroit; DTE, Water Officials Responding
September 12, 2021
https://www.msn.com/en-us/news/us/road-buckles-in-southwest-detroit
Officials are investigating an area where part of a road buckled and an odor was present in southwest Detroit over the weekend.

Then on September 13 a deep quake above the Bahamas. This was accompanied by a small quake in Georgia, along the East Coast Fault Line, with an exploding apartment complex in Dunwoody, Ga. This is typical for stretch zone accidents. 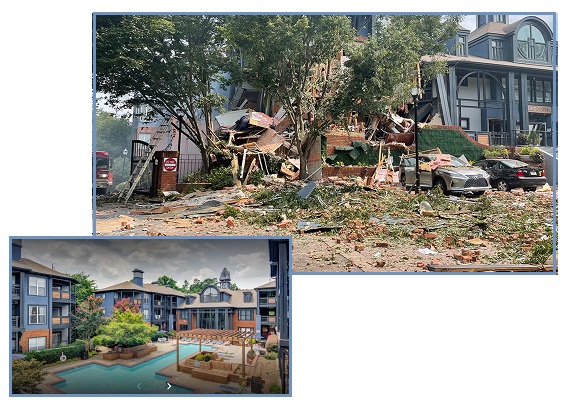 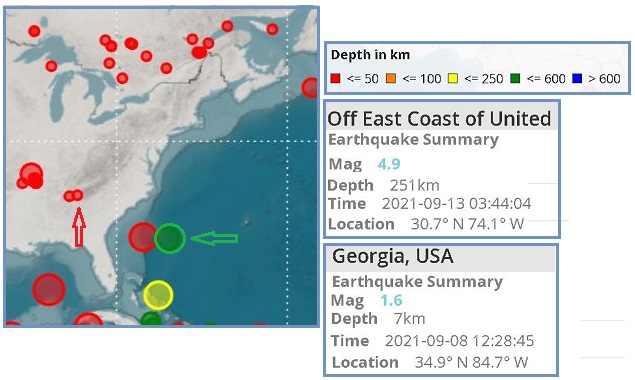 On September 14 it was apparent that the pressure on the tip of Mexico was extreme. The Zetas had advised to watch the tip of Mexico for clues as to timing. These were deep quakes and occurred repeatedly and showed no sign of stopping. What was significant was the sympathetic quake in NE Mexico, right along the Fault Line that runs from the start of the New Madrid Fault Line near Mexico City on up along the Gulf coastline. On September 17 a buoy off the coast of New York was throbbing. This is a point where the New Madrid, East Coast, and Ramapo fault lines connect. Is it coincidental that booms were heard in W Virginia on September 17? On September 18 houses shook near Fayetteville, N Carolina. Not a jolt but a pulling apart, a trembling, which is indicative of a stretch zone incident. On September 19 a rupture occurred in western Pennsylvania along the New Madrid Fault Lines at Apollo. Having wrapped around the SE Portion, Wave#3 appears to have completed. ZetaTalk Conclusion 7/31/2020: Variations where there is no water to vibrate include humming and booming, like drums. All these afflicted areas are in stretch zones, where rock is being pulled apart.