ZetaTalk Newsletter Addendum as of January 8, 2022

This Addendum is to record the progress of the 3 week New Madrid unzipping process, and to note that the Gulf floor heaves prior to major action.

As 2021 closed out there were indications from many areas that the Mainland and SE Portions of the N American Continent were separating. From the tip of Mexico to the top of the New Madrid Fault Line up along the Seaway and into the New England area there were unexplained booms, earthquakes that the USGS refused to acknowledge, and explosions.  On December 29 a refinery exploded at the tip of Mexico, and the Gulf buoy showed the Fault Line under the Gulf was active. On December 30 a CSX Coal Plant in Baltimore exploded.  On December 31 the Azores tugged open and a buoy off coast of New York City began to throb. Lázaro Cárdenas Refinery in Minatitlán suffered Second Fire of the Year
December 29, 2021
https://today.in-24.com/News/796309
Neighbors of Minatitlán, Veracruz, were surprised during the last hours of December 29 by a strong fire registered at the Lázaro Cárdenas Refinery, which began around 10:00 p.m., but was put down hours later. The incident was confirmed by the Veracruz Civil Protection Secretariat. Through their social networks, they reported that forces from the three levels of government came to the disaster area.

Major Explosion Reported at CSX Facility in Baltimore
December 30, 2021
https://t.me/rtnews/17596
Police and firefighters responded to an explosion at the CSX Coal Plant in South Baltimore.

Action along the entire New Madrid Fault Line continued as the Mainland Portion slid to the SW. A construction site explosion at Juarez, Mexico on December 30 was blamed for the huge boom heard and felt at El Paso, TX but the number of earthquakes in that region belies this story. Construction Site Explosion in Juarez Caused Loud Boom heard, Felt in East El Paso & Lower Valley
December 30, 2021
https://kvia.com/news/el-paso/2021/12/30/construction-explosion-in-...
A blast widely heard and felt across portions of El Paso's eastside and Lower Valley was apparently caused by an explosion at a construction and excavation site in neighboring Mexico. Residents on El Paso's eastside and Lower Valley reported hearing a loud boom that sounded like an explosion and shook homes as if it were an earthquake, but police and fire officials were at a loss to explain the cause of the blast that was widely felt.  The U.S. Geological Survey said no earthquake activity had been detected in the Borderland.

Hundreds of El Pasoans Report Loud House-Shaking Boom across East Side, Lower Valley
December 30, 2021
https://news.yahoo.com/hundreds-el-pasoans-report-loud
El Diario de Juárez reported that the loud boom was due to a company in Juárez using explosives to extract construction material from a hill. It reported many homes were damaged in the area.

On January 1 a train derailment just north of Detroit at Romulous, MI occurred on the Seaway where Lake Huron pours its waters into Lake Erie. Moving along the Seaway to western Pennsylvania there were booms and shaking houses. The USGS claimed no quakes had occurred, but Volcano Discovery registered them.

Train Derails in Romulus Overnight
January 1, 2021
https://www.fox2detroit.com/news/train-derails-in-romulus-overnight
A train derailment was reported overnight in the area of Eureka and I-275 area going north to North Line Road in Romulus.

Loud Boom Rattles Region
January 1, 2022
https://www.wtae.com/article/loud-boom-rattles-region/38649161
Residents across portions of Allegheny and Westmoreland counties took to social media and their phones late Saturday morning over a loud noise that shook homes -- and nerves -- in the area. On social media, reports came in on the noise and rumbling that could be felt from East Huntingdon, Irwin, and Elizabeth Township to as far as Carnegie and Mount Washington.

Explosion, Flash Over Pennsylvania Likely a Meteor
January 2, 2022
https://weatherboy.com/explosion-flash-over-pennsylvania-likely-a-m...
While skies were lit over many communities from fireworks shot to celebrate New Year’s Eve as 2022 rolled in, an unexpected flash and boom rocked portions of Pennsylvania the next day. The National Weather Service in Pittsburgh, Pennsylvania believes the flash and explosion spotted over the state was likely an exploding meteor. At 11:26 am yesterday, New Year’s Day, a loud boom and shaking impacting portions of western Pennsylvania. Allegheny County officials said that their 9-1-1 system received many reports of a “loud boom, shaking in the South Hills”. However, there was no seismic activity reported by USGS and the region was free of any thunder and lightning.

By January 4 the Mid-Atlantic was splitting open, even the USGS having to admit the 6.1 quake near the Azores. Quakes continued at the tip of Mexico – the start of the New Madrid Fault Line. 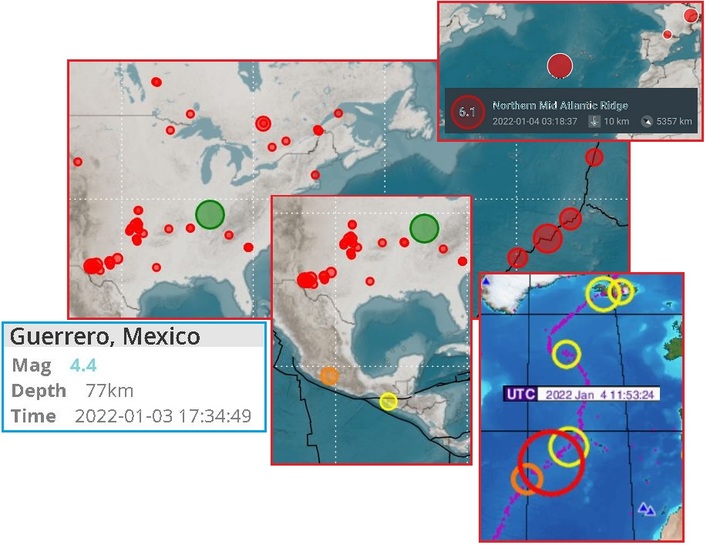 On January 5-6 the Mainland Portion was sliding into the Pacific. This action is likely to be the trigger for the diagonal unzipping up along the Mississippi River. Quakes in West Texas and along the California-Nevada border showed this slide. The Seaway continued to split open, a quake in Toledo, Ohio on January 5 sparking a refinery fire. No Injuries after ‘Valve Release’ at Toledo Refinery
January 6, 2022
https://www.13abc.com/2022/01/07/report-crews-responding-incident-t...
A spokesperson with the refinery said the facility experienced a valve release that caused a small fire around 7:27 p.m. that was quickly put out. All employees and contractors were accounted for and there were no injuries. The Oregon Fire Department confirmed they assisted the refinery with the situation.

Has the Gulf floor been heaving? A key buoy 42409 floats above the New Madrid Fault Line coming up from Mexico, and has throbbed on alert in the past just ahead of New Madrid action affecting the SE Portion of the N American Continent. In many cases, even when not alerting, the buoy shows the height and depth of wave action as it rises and falls. Why would this be unless the floor of the Gulf was heaving? Note the last heaving coincided with December 29, when the big 6.1 quake struck southern Indiana.

The way the Zetas described the final New Madrid spasm, it was where rock fingers had been broken to the point where few were holding on. Then a domino effect would start, each breaking rock finger putting more pressure on the next in line. One by one, they snap. This is likely to be something in the tip of Mexico or the Gulf of Mexico giving way, and then any connections snapping one by one up along the Fault. Quakes at the tip of Mexico where the Fault Line starts have been significant and constant.

ZetaTalk Prediction 2010: For the New Madrid, which will include the European tsunami in its effects, there will be one large jolt with a subsequent and almost immediate tearing of the Atlantic. We have stated that the European tsunami will be the largest, but smaller ones will follow in time. Likewise for the New Madrid adjustment, which involve a tearing of the entire N American continent from the seaway down to Mexico. This adjustment will not occur until minor rock fingers have been steadily broken in a number of places. The areas to be affected have already been experiencing quake swarms, buckling roadways, sinkholes, breaking dams, and unsettling jigging which is unexplained by the authorities. When the primary blockage gives, there will be a huge jolt, with little warning. Aftershocks will continue until the time of the pole shift itself.