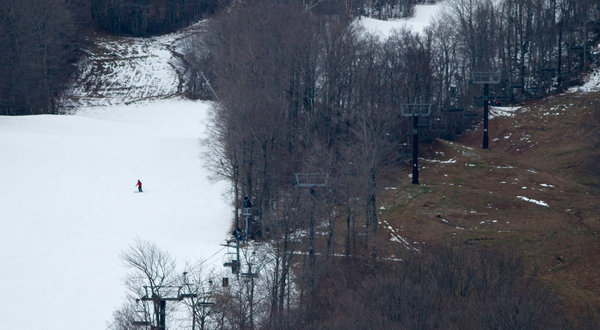 In the past there have occasionally been winters with snow packs below normal in the United States, but nothing like this!

Please recall the "epic" snowfall last year, and less than two months ago the East Coast was hit with a record breaking winter storm, in the autumn:  https://poleshift.ning.com/profiles/blogs/u-s-east-coast-record-bre...

A lone skier on an artificially snow-covered run at Mount Snow in West Dover, Vt.

WEST DOVER, Vt. — There were far too many skis on hand this week at High Altitude, a rental shop on the road to Mount Snow here, and Andrew Glover, the manager, was far too lonely.

The problem was the weather. Week after maddening week of unusually balmy temperatures have made snowfall scant in New England, and, worse, wreaked havoc on snowmaking at ski resorts that like to have a healthy base of, at the least, manmade snow by Christmas.

Many ski areas opened late this year, and the slow start is threatening the fragile economy of towns that rely heavily on the ski traffic that usually starts in earnest over the holidays. Hundreds of seasonal workers have been unable to start their jobs, while some innkeepers report far more empty rooms than is customary during the holidays.

“We opened two weeks before Thanksgiving, and to this point we haven’t even done $2,500 worth of sales,” said Mr. Glover, whose shop also sells ski and snowboarding gear. “It’s been wacky weather, and it’s been really tough.”

Nor is the frustration limited to the Northeast. Out West, some of the country’s more famous ski resorts have been waiting for the steady snowfall that made last year an epic season, dumping seemingly endless amounts of fresh powder.

At Squaw Valley in Olympic Valley, Calif., near Lake Tahoe only 15 percent of the mountain was open this week. Just 12 inches of snow had fallen at the base of the resort and 26 inches on the upper mountain, by far the lowest in a decade for this time of year. (By this point in 2010, the resort had received 135 inches at the base and 246 inches on its upper mountain.) At Alta Ski Area, near Salt Lake City, the base depth was 34 inches, compared with 105 inches last year at this time.

“People are just ready to sacrifice someone to the gods,” said Bill Clifford of Cumberland, Me., who plans to spend the holiday week with his family at Sugarloaf, where 15 out of 153 trails were open on Thursday. “Everyone’s depressed, knowing those limited trails will be crowded and not very much fun.”

On the few days and nights that temperatures have dropped and lingered below the mid-20s, ski areas in the Northeast have gone into manic snowmaking mode. Bill Stenger, president and chief executive of Jay Peak Resort in Jay, Vt., said the resort had been able to make snow on about 15 days this season, about half the usual number.

“We’re going like hell” on days that are cold enough to fire up the snow guns, he said. “Our guys are working 24 hours a day.”

But those efforts have been foiled at times — as on Wednesday, when temperatures rose into the 40s in southern Vermont.

“If Mother Nature’s not going to give us the snow, she’s got to give us the temperatures,” said David Meeker, a spokesman for Mount Snow, where 16 of 80 trails were open on Thursday.

Jiminy Peak Mountain Resort, in Hancock, Mass., opened on Dec. 10, a few weeks later than its usual Thanksgiving start, delaying paychecks for hundreds of seasonal workers. Brian Fairbank, president and chief executive, said that about 800 skiers had visited the ski area by mid-December, down from 3,000 by that point last year. “The Valium bottle in my drawer — I haven’t taken it out yet or opened it yet,” Mr. Fairbank said. “But it’s close.”

Mad River Glen, a ski area in Waitsfield, Vt., which prides itself on making minimal snow and relying almost entirely on the natural kind, has yet to open at all. “There’s probably about 45 people waiting just to start work,” said Jamey Wimble, Mad River’s president and chief executive.

At Okemo Mountain Resort in Ludlow, Vt., 33 trails were open on Tuesday, compared with 70 or 80 this time last year, said Bonnie MacPherson, the resort’s spokeswoman. Okemo has focused on where it is easiest to make snow, she said: high on the mountain, which means intermediate and advanced trails.

In Colorado, ski areas like Keystone and Arapahoe Basin had opened less than half of their terrain, although colder temperatures were allowing snow-making machines to keep runs open and both had a few inches of snowfall this week.

In both the East and the West, ski industry workers said it was too soon to predict how the season would shape up, because December snowfall is typically fickle. Parts of Vermont and Massachusetts were eagerly expecting a few inches overnight Thursday and Friday morning.

“We know the snow will come,” said Jennifer Rudolph, spokeswoman for Colorado Ski Country USA, a trade association that represents 22 of the state’s ski resorts.

There is a bright spot: northern New Mexico, where Taos Ski Valley has received more than 50 inches of snow this month, compared with only six last December. “This is the best opening we’ve had since 2002,” said Adriana Blake, a spokeswoman.

At Vermont’s Mount Snow, an arsenal of some 250 fan guns and 800 air water guns have built the base depth to 10 to 18 inches and, thanks to cold temperatures over the weekend, doubled the resort’s skiable terrain between Friday and Tuesday. Mr. Fairbank, of Jiminy Peak, said he had flown a small plane over a number of ski areas in the region on Monday, snapping pictures of slopes covered with (manmade) snow to send the 100,000 people on his resort’s e-mail list.

Still, he and others said it was famously hard to motivate people to venture north on a ski trip if their home turf was still grassy.

“When people are still able to play golf down in Connecticut,” said Mark Wallace, owner of First Trax Sports Shop in West Dover, “they’re not thinking about coming up here.”

Deb Buehler, who owns the Red Oak Inn in West Dover, a few miles from Mount Snow, said she had 22 guests last Christmas but no bookings until Dec. 29 this year. But Mr. Meeker said the resort’s hotel and condominiums were mostly booked for the week after Christmas.

At Stratton Mountain in southern Vermont, where 18 of 94 trails were open on Wednesday and the afternoon temperature was 39 degrees at the summit, Myra Foster, the marketing manager, said there had been a few cancellations for the Christmas week.

“People are really waiting to see,” she said. “Everyone’s keeping their fingers crossed.”

T. J. Raab, a skier from Hoboken, N.J., who coordinates a ski-house share with 17 other people in Killington, Vt., said he had skied there last weekend but that with limited terrain open, the trails felt crowded.

“We skied from 8 to 10, and by then we were like, We need to get off this mountain,” Mr. Raab said. “You feel like you’re going to get crushed.”

But Tristan Grush, 14, of West Dover, said he had skied 10 trails at Mount Snow last weekend and found the terrain “really nice.” The ribbons of white on the otherwise brown mountain lift his spirit, he said.