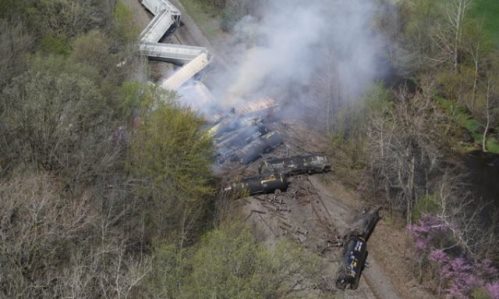 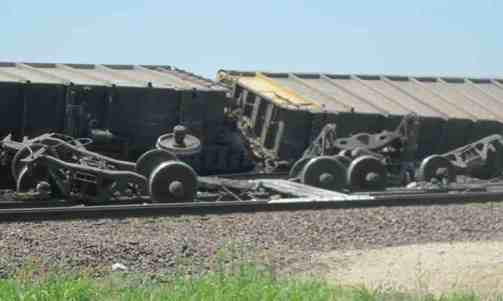 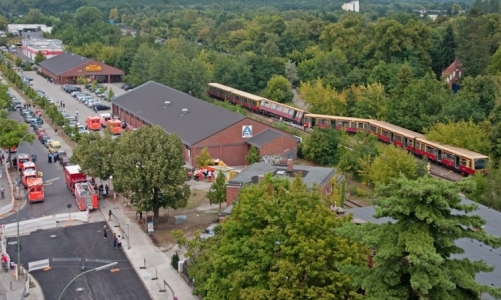 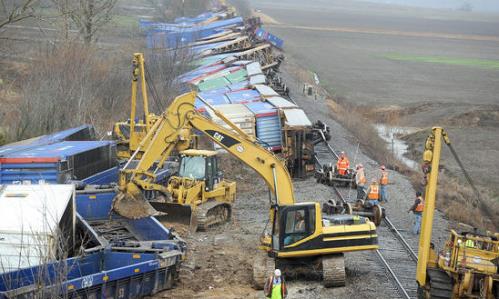 PASCO — A railroad official says several cars have derailed in a switching yard and thousands of gallons of a toxic chemical spilled.

Burlington Northern Santa Fe spokesman Gus Melonas says the train was moving at less than 5 mph in the Pasco yard when seven cars went off the tracks about 5 p.m. Sunday.

He said a valve on a tanker car was damaged, causing the leak. By 9:30 p.m. about 12,500 gallons of hydrochloric acid had spilled.

Melonas said there were no injuries.

He said officials have determined there is no threat to the public with the spill occurring in a remote area of the yard, far away from any homes or businesses.

Jaipur: The Jaipur-Delhi rail route was disrupted for several hours when two wagons of a goods train derailed near Alwar railway station on Monday. However, no one was injured in the incident but eight trains were affected under the North Western Railway (NWR) section.

The incident occurred at around 3 am on Monday when a goods train, carrying coal from Mathura to Rewari, got derailed near Tijara crossing in Alwar-Rewari section. Due to rail route disruption, four trains including Haridwar-Ajmer Holiday Special, Amritsar-Jaipur Express, Jammu Tawi-Ajmer Superfast and Haridwar-Ahmedabad Mail were diverted.

Four other trains including Hisar-Jaipur Fast Passenger (Up and Down) and Bhiwani-Mathura (Up and Down) were cancelled between Rewari-Bandikui and Rewari-Mathura Junction routes respectively.

Sources said goods trains started running on the Alwar track recently after the doubling work was completed and inspected by the railway authorities. Divisional Railway Manager of NWR, Jaipur, GC Budhalakoti, visited the spot to inquire about the situation and has ordered an inquiry in the incident.

NWR officials said that the wagons were removed from the track after which it was repaired and rail traffic was restored before Shatabdi passed from the track at around 11 am. "Passengers had to face tough time due to delay and partial cancellation of the trains as they kept waiting on the platform. Long queues of commuters were seen at the inquiry office while they were trying to find out status of their trains," said an official.

DALLAS — Nearly 100 Amtrak passengers spent hours trapped aboard the Texas Eagle after one car derailed near downtown Dallas on Sunday.

Food and drinks were provided to passengers while crews worked to disconnect the rail car that left the tracks on a span over the Trinity River, just short of its planned stop at Union Station in Dallas.

The train was delayed a total of 5 hours and 24 minutes. Passengers resumed their journey from San Antonio to Chicago at 9:07 p.m.

The Texas Eagle operates daily, and the route extends to Los Angeles three times a week.

EMERGENCY services are working to stem a fuel spill from a derailed freight train in Sydney's inner west.

The incident, which involved a private freight train at Rhodes station, was reported to police at around 7.30pm (AEDT) today.

"The male driver appears to be shaken but unhurt by the incident," a police spokeswoman said.

City Rail has warned commuters to expect delays of 20-30 minutes on Northern and Newcastle and Central Coast lines from the City.

Comment by Starr DiGiacomo on May 9, 2011 at 4:50pm
Abbottabad operation is attack on Pakistan’s sovereignty: Nawaz
India’s top court stays landmark ruling on holy site
Pakistan suffer second loss with 5-1 Aussie thrashing
I knew of US raid, not the target: Rehman Malik

Unidentified relatives look at the photographs of dead and injured victims of train crash victims, outside a morgue at Birbhum district, about 125 miles (200 kilometers) north of Calcutta, India, Tuesday, July 20, 2010. - File Photo by AP

NEW DELHI: Officials say at least 25 people were injured when a train derailed in central India, the second derailment in the country in less than a week.

Seven of the train’s cars fell off the track. Singh says all the passengers in the fallen cars were rescued and that the injured were taken to hospitals.

Last Wednesday, 27 people were injured when a train derailed in eastern India.

India has one of the largest railroad networks in the world, with around 14 million passengers each day. Accidents are common, and most are blamed on poor maintenance and human error. – AP

SYDNEY'S main railway freight line is blocked in both directions after a runaway train crashed into empty fuel wagons, derailing at least three carriages at Enfield.

Witnesses said that at about 1.30pm, 28 wagons loaded with crushed rock ran almost two kilometres along the tracks at speeds of up to 20km/h before striking empty fuel wagons that were stabled, pushing them several hundred metres before finally derailing.

Firefighters were called to assess any risk of explosion from the fuel carriages and several power stanchions were damaged.

Workers at the marshalling yards were reportedly within metres of being struck by the train.

A spokeswoman for RailCorp confirmed that the main freight line was still blocked in both directions, but said there would be no impact on commuter services during the afternoon peak.

The 2800 tonnes of freight, belonging to private operator Pacific National, had been parked since last Friday, with a lack of hand brakes apparently the cause of the runaway.

CN freight train off the tracks in west Manitoba

CN Rail crews are dealing with a derailed freight train in western Manitoba, near the boundary with Saskatchewan.

Warren Chandler, a spokesman for CN Rail, told CBC News Saturday that a train left the tracks near Uno, Man., about 20 kilometres from Saskatchewan.

Chandler said 11 bulk containers loaded with general, non-hazardous merchandise were spilled as a result of the derailment. Another 33 empty containers also fell over.

There were no injuries and investigators are on scene.

There was no word on the cause

Belgrade, MT, 17 cars in westbound lane jumped the tracks Sunday, some tipping over and spilling their loads.  The derailment halted 2 doz. trains on the Montana Rail links main line for 24 hours.  No toxic spills, noone hurt

A coal train derailed in the Christchurch suburb of Heathcote with 7 cars affected.  The conductor reported cracks in the Martindale Bridge.