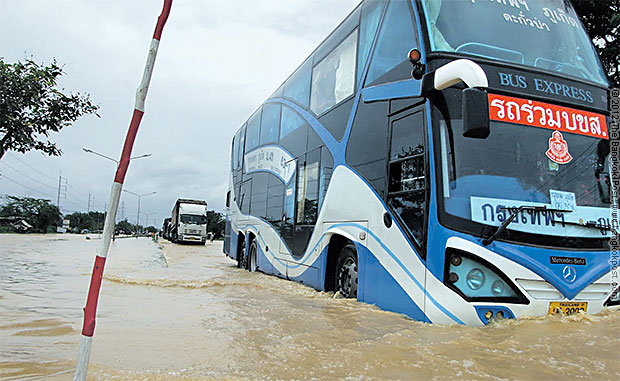 A bus bound for Bangkok from Phuket runs through flooded Asian Highway route 41 near Pathomporn intersection of Chumphon’s Muang district yesterday. A 1km section of the road has been flooded to heights between 20cm and 80cm, making it impassable to small vehicles. 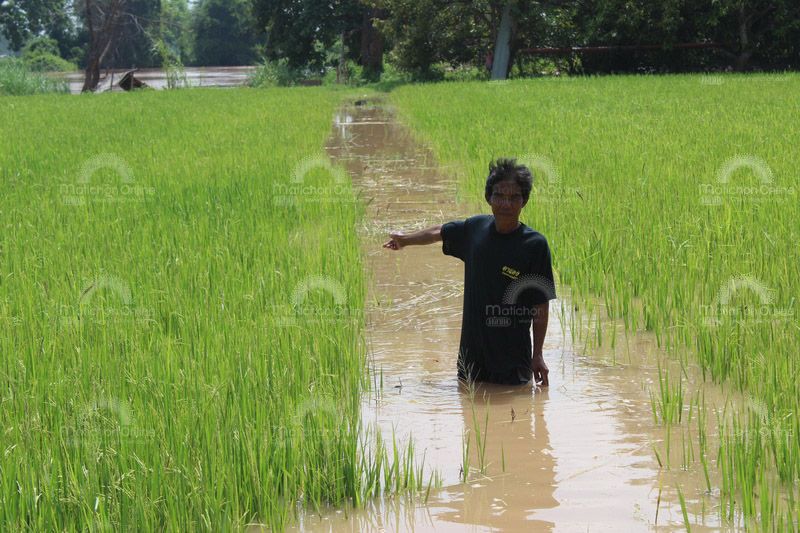 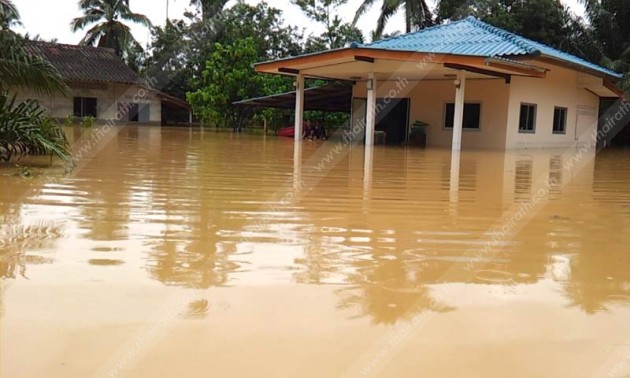 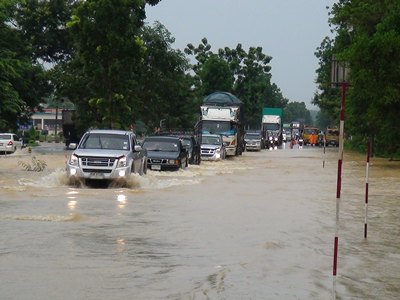 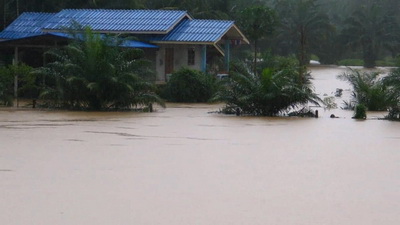 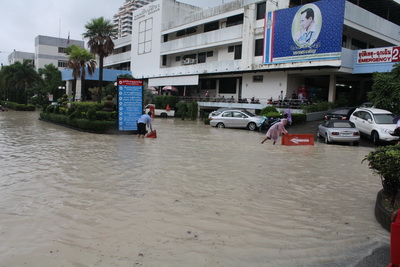 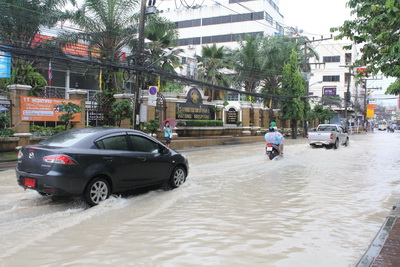 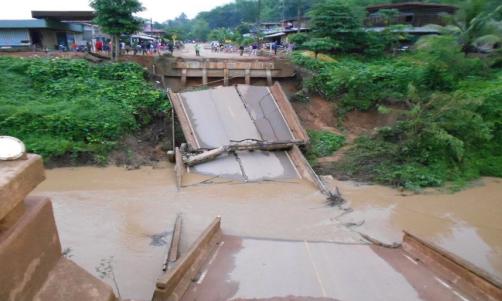 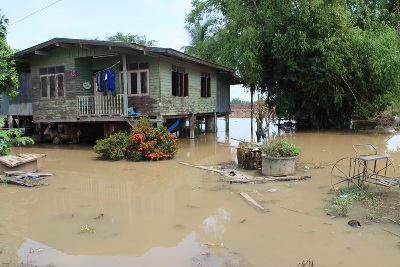 Landslides and flash floods caused by prolonged heavy rain have wreaked havoc in many parts of Chumphon, Ranong and Mae Hong Son provinces.

The storms, which began on Sunday night and subsided yesterday morning, flooded roads and homes, badly affecting thousands of people living in the three provinces.

In Chumphon, at least 500 families in two villages of tambon Banna in Muang district and a village in Hin Kaew of Tha Sae district were hit by flash floods with water levels reaching up to 2m in some areas.

Many roads were closed or impassable yesterday due to high water levels. A 1km stretch of the Asian Highway route 41 near Pathomporn intersection in Muang district was under about 20-80cm of water, making it impossible for small vehicles to pass.

Somchai Im-yu, director of the Hydrology and Water Management Centre for the Irrigation Department's Southern Region, said prolonged rain since Sunday night had triggered flash floods in several areas of the province.

Mr Somchai said the Chumphon canal had burst its banks and had flooded several low-lying areas.

Some areas in Nam Jued municipality in Kra Buri district are under 50cm-1m of flood water. Hundreds of families in the municipality have also been hit.

A 500m-long stretch of the Petchkasem Highway linking Ranong with Chumphon near Kra Buri market was closed to all traffic yesterday.

He has also ordered the urgent evacuation of people in flood-prone areas in Kapoe, Kra Buri and La-un districts.

It took local authorities several hours yesterday to clear a path to the village.

The Meteorological Department yesterday warned people in the North and East and in western parts of the South to prepare for heavy rain and possible flooding today and over the next few days.

The department said a low pressure front is now covering the North. The southwest monsoon over the Gulf of Thailand and the Andaman Sea will probably cause heavy downpours in these areas.

Choppy seas are expected in upper parts of the Gulf of Thailand and the Andaman Sea. All shipping should proceed with caution and small boats should stay in port today and the next few days, the department warned.

The work will be overseen by the Water Resources Management and Flood Control Committee chaired by Science and Technology Minister Plodprasop Suraswadi.

Construction of the walls will take about two months, he said.

Many southern provinces have been hit by flash floods, triggered by heavy rain with one death reported in a storm-related road accident in Krabi province.

Flooding in Ranong has extended to five districts with no sign of abating while more flash floods and rains continue, Thai News Agency online reported.

The governor met Wednesday morning with agencies concerned to assess the situation and provide help to local residents.

In Krabi, storms hit several areas, damaging scores of houses and crops in the provincial seat.

One death was reported as a motorcycle crashed into a felled tree on a road.

A thousand small fishing boats in Satun have stayed ashore for a week due to strong winds and 2-3 metre waves in the Gulf of Thailand. Some seaside houses were damaged by waves smashing on to the shore.

In Chumphon, Phinit Charoenpanit, governor reported the flood situation has extended to five districts and warned fishermen to beware of rough sea until the end of this week as rainfall continues.

The online agency said a 200-metre portion of Asian Highway 41 in Sawi district is under 30-50cm water and is impassable for small vehicles.

In Ranong, flash flooding hit almost all areas of Kra Buri district on Tuesday. A large number of people are stranded in their homes and officials used flat-bottomed boats to evacuate them to safe areas. Some houses were damaged by the flood.

A portion of Phetkasem Road, connecting Chumphon and Ranong, was flooded and impassable for small vehicles; some topsoil running down a mountainside blocked sections of the road.

The meteorological department on Wednesday reported a strong southwest monsoon over the Andaman Sea and the Gulf of Thailand. It warned of thundershowers across Thailand, with isolated heavy to very heavy rain in the South.

People in at-risk areas along foothills and near waterways should beware of flooded conditions.

Strong winds and waves of 2-3 metres are likely in the Andaman Sea and upper Gulf of Thailand. Shipping should proceed with caution; small boats should stay ashore for a few days. 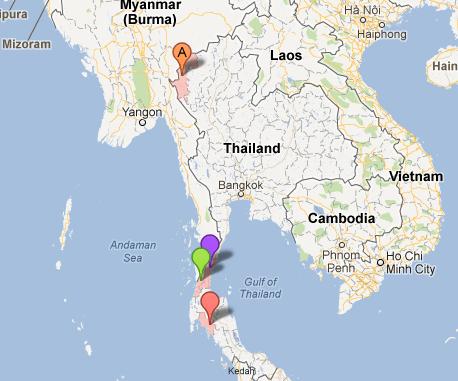 A 163.5mm deluge of rain fell on Phuket between 7am Tuesday and 7am today, the Provincial Disaster Prevention and Mitigation Office (DPM) reported on Wednesday. Apart from heavy flooding in Phuket Town and, as always, in Patong, the DPM reports floods in at least three and possibly as many as eight villages in tambon Srisoonthon. In Kathu district, homes in the villages of Baan Tak Det, Chom Thong and Tak Thong, close to Tesco Lotus in Cherng Talay, were invaded by muddy flash floods around 3am. The DPM said that it had as yet received no reports of flooding in Mai Khao, Chalong, Karon or Rassada.