Ophiuchus is located between Aquila, Serpens and Hercules, northwest of the center of the Milky Way. The southern part lies between Scorpius to the west and Sagittarius to the east. The Zetas have indicated that Planet X approaches from the direction of Orion, yet Ophiuchus is located opposite Orion from the vantage point of Earth.

This is precisely the position Planet X would assume following a passage from beneath the ecliptic upon initiating its return sojourn toward the unlit binary sun of our solar system.

In 2013, our Sun is in the constellation Ophiuchus from November 29 until December 18, the December date given by the Zetas near the end of the Fall Trimester.

"The Christmas Hammer is caused in great part by the December switch in Magnetic Trimester which occurs, as we have explained, at approximately December 17 on the Earth calendar. This forces a magnetic adjustment in all magnetic planets, and great stress on the Earth which is locked into a magnetic dance with Planet X."   ZetaTalk

Comment by Nancy Lieder on November 30, 2010 at 2:11pm
Justin, I was just off researching this myself as I know the dual serpents are associated with the Annunaki. Here's what I found. The last passage, 3-4,000 years ago, etc. And on some ancient symbols of the Caduceus, there stands the Winged Globe as the wings!

Caduceus
http://en.wikipedia.org/wiki/Caduceus
William Hayes Ward (1910) discovered that symbols similar to the classical caduceus sometimes appeared on Mesopotamian cylinder seals. He suggested the symbol originated some time between 3000 and 4000 BCE.

Caduceus
http://www.answers.com/topic/caduceus
While probably originating in Mesopotamia, the caduceus found its way eastward to India and westward into the Mediterranean. Comment by Nancy Lieder on November 30, 2010 at 1:24pm
This is just stunning! I too want to know the origin - is it Summerian, Egyptian, Vedic? I just wrote some new ZT for 11/4 on the influence of the end of the December trimester, December 17, on the 7 of 10 predicted scenarios. It all relates and I am going to post early, here.

SOZT
We are asked almost weekly how the governments of the world plan to respond to the 7 of 10 scenarios, and have responded to this in the past. They will not warn their populace
http://www.zetatalk.com/ning/06no2010.htm
nor is Obama at liberty to do so
http://www.zetatalk.com/index/zeta574.htm
for many reasons. This is, at the current time, just another prediction from just another source, despite our accuracy on hundreds of predictions that have come about. Our predictions tend not to be dated, except for the 2003 prediction on the passage, which they consider a fizzle despite the obvious ARRIVAL of Planet X precisely as we predicted – where and when expected. Where our predictions on the 7 of 10 scenarios starting by the end of 2010 have made some nervous, the specter of the public becoming solidly aware of the ZetaTalk message, and aware of the presence of Planet X nearby scares them more.

Meanwhile, in the S America region, matters are even more obvious. That the Caribbean is under pressure
has also been noted since the Haiti quake on January 12, 2010
/newsletr/issue169.htm
and the lifting of the northern border of the Caribbean Plate by March of 2010.
/newsletr/issue179.htm
The Andes Fault is showing mountain building while the sea off shore from Colombia is sinking.
/newsletr/issue211.htm
This is all of record and occurring, date wise, simultaneously. Oil and gas rigs have been exploding with unexplained and unexpected accidents in the Caribbean all year along the Caribbean Plate border,
/newsletr/issue203.htm
as occurred in Bonaire and on September 2, 2010 in Trinidad and Tobago on May 13, 2010.
Even Africa showed her eagerness to roll
/newsletr/issue212.htm
by late November of 2010.
At the current 2010 has been a year when all the plates along the Equator have been loosened up by the continuous daily jerking about that the Earth wobble incited by the near presence of Planet X. The plates are greased, so that at the present time one can find quakes on all sides of the various plates involved, occurring almost simultaneously. They are twitching, almost unimpeded in their motion, and just waiting for a push to set them into the plate movements we have described. Enter the Christmas Hammer,
http://www.zetatalk.com/index/zeta420.htm
the end of the Magnetic Trimester on December 17,
http://www.zetatalk.com/ning/17jy2010.htm
the time frame of the great 9.5 Sumatra quake on December 26, 2004.
http://www.zetatalk.com/index/zeta199.htm
Do our predictions that the 7 of 10 scenarios will occur prior to the end of 2010 have something to do with December as a month of magnetic changes affecting the magnetic dance between Planet X and the Earth? Yes!
EOZT

Comment by Jorge on November 30, 2010 at 1:05pm
Interesting sharing !!! ... It represents the emblem, the goal, and the Mystery, of mankind.
It is the Great Work, of evolving hummanity.
The Wholy Grial ... The Mystery of Christ ... And the Mystery of Hermes, which is the same thing.
Two serpents (male and female), embraced, and climbing together towards the Light.
The forces of Life, climbing together in search of Light ... Evolution.
The point where the two serpents cross the door towards Light is the White Rose.
The Rose is white because it represents Wisdom ... The wisdom of Love in Death.
Death is the death of selfishness and self centeredness.
It is only then, that the serpents of Life turn into serpents of Light.
Then, the matter of Life turns into that stuff the Spirit is made of .
Libido, freed from the mental forms, current ideas and mechanical thought,
becomes higher consciousness.
It is the Cup of Christ, and the Cup of Hermes.
________________________________
Sorry for this somehow different view.
It is not that I'm not fully committed on PX and coming events, and
the future of mankind.
It is just that I felt I had to share a different sight for this beatyful symbol ...
Thanks for your patience !!! ... 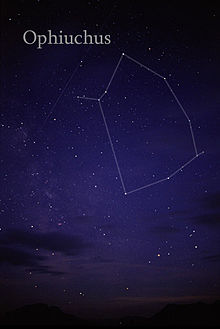 This is very possible, this constellation is related to the tail and head of the serpent, and according to the Bible, the snake is a bad thing, it brings bad things, there is so little to know.... It's a shame so many people do not even have idea.