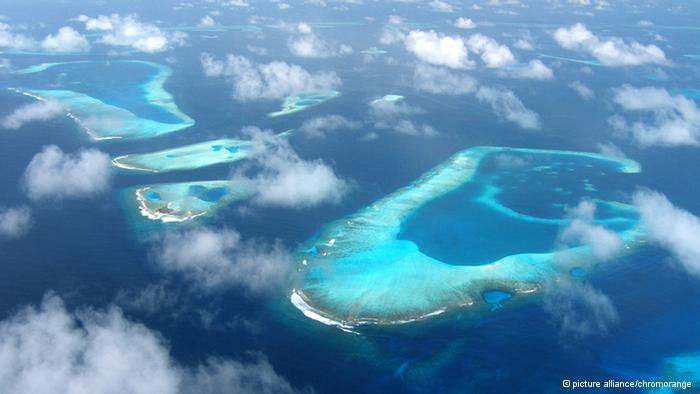 Small island nations around the world are already feeling the impact of rising sea levels. And probably none more so than the Maldives in the Indian Ocean, which is considered the lowest-elevation country on the planet. The average elevation of its 26 atolls is just 1.5 meters (5 feet) above sea level - so it wouldn't take much for the country to be rendered completely uninhabitable. Rising waters have already caused some islanders to flee their homes for higher ground. On the Kiribati islands in the Pacific, some villages have been completely flooded. Local farmers also have to worry about encroachment of saltwater on their crops. The ever-approaching sea means less surface area for agriculture, and a greater need to transport food from afar. 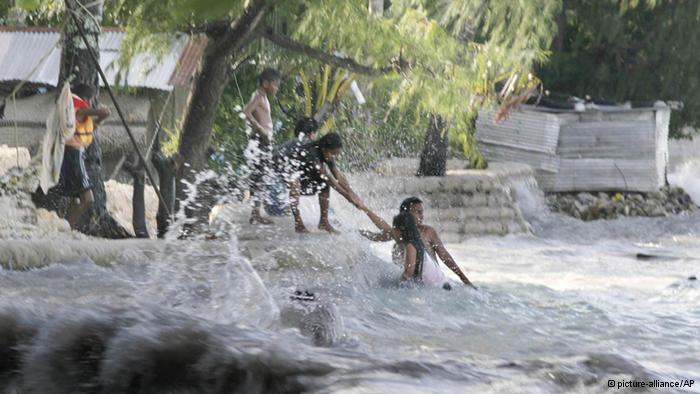 Around 113,000 people call the Kiribati islands home. Locals who've been displaced often end up on the main island of South Tarawa, which has a sea wall to protect low-lying properties on the shore from rising waters - but that's no permanent solution. Floating in the floodwaters

Although Bangladesh is on the mainland of Asia, it faces a huge risk from climate change due to its low-lying geography and population density. A mere 1-meter (3-foot) rise in sea level would cause half the country be under water. Communities have started adapting to increased flooding by using floating agricultural technology to grow their crops. Venice in northeastern Italy is no stranger to flooding - and according to experts, the iconic city will continue to sink. The Italian government has invested 9.6 billion euros ($7 billion) in the "Moses" water barrier project, designed to protect the city - a UNESCO World Heritage site - from rising oceans and high tides. The barriers are expected to be completed by 2016.

It’s not sea level rising. The Maldives along with Bangladesh are on the Indo Australian plate which is being pushed under the Himalayas.

The Kiribati islands are on one of the Pacific plates and this ZetaTalk describes how as the plates adjust land will rise or fall as a result.

We have stated that the Pacific is not the singular plate it is assumed to be, but many. Can mankind map the fault lines deep under the ocean floor? Supervolcanoes erupted in the past because the Earth was subject to massive assault when she rode out in the Asteroid Belt and herself got wholloped. Supervolcano eruptions will not occur during this coming pole shift, and certainly will not prior to the shift. As has been noted, and in the news lately, new volcanic islands are emerging unknown to man until boaters are suprised to find them. This will certainly be on the increase, and occur in numerous places in the Pacific, heating the water and increasing the ferocity of storms as a result. More likely to surprise man are sudden adjustments in the plates that compose the Pacific, with land suddenly rising or falling as a result. Hawaii, as we have stated, will rise, a trend already apparent. Just so, land can likewise fall, with the ocean rolling in. One can analyze the trends, and thus plot the fault lines under the Pacific, if clever and aware.

None of these locations will survive to even see the pole shift, if they are even around by the time the last weeks arrive the severe wobble sloshing will wash them away.

ZetaTalk about the wobble sloshing during the last weeks

Thus as the globe is pushed violently northward, the waters in the Pacific will slosh southward, and waters in the Atlantic will slosh in the opposite direction, northward. Hold a globe in your hands with the Pacific Ocean facing you, and push the N Pole forcefully away to see how the land will move under the ocean. It is essentially that for the Pacific, the northern coastlines will be pushed under the ocean, and for the Atlantic, the southern coastlines will be pushed under the ocean. Then, 12 hours later, this reverses. The sloshing will be in a N/S direction, back and froth, with the Moon's influence, as we have stated, still trying to pull the waters toward it, creating its normal tide on top of the severe wobble slosh. In that the severe wobble slosh will be 200-300 feet high, this will scarcely be noted.