Fuel shortages in Waspám in the North Caribbean Autonomous Region , one of the towns most affected by the rains that hit the region , is the main reason that even after several days no real status of the damage is known mainly caused crops of community , he told El Nuevo Diario, the mayor of this town , Alex Fernandez

Fernandez lamented the inaction of both the regional and central authorities , to address the situation .

" We have not been answered or regional level , much less the center, here with the few resources on the mayor we have sent aid to the brothers of Awas Tingni , where they remain evacuated 25 families , they lost everything ," observed mayor Fernandez.

However, Colonel Rogelio Flores, head of the Civil Defense Army Nicaragua , told El Nuevo Diario that had begun to send humanitarian aid to those affected by the floods, such as blankets , mats and other items.

The overflowing river Wawa Boom remains paralyzed traffic , which has pushed up prices of products in Puerto Cabezas and Waspám , as traders have to pay between 600 and 1,500 Cordobas per charge , which must be borne by consumers, while those traveling must pay 50 cordobas by crossing .
Source Cracks appeared in the ground and the unusual phenomenon are afraid to punateños .

Residents told the incident occurred on December 19 , in the Villa Arenal area west in the town of Alto Valle Punata .

The villagers joined in an inspection at the site and exposed the cracks along about 400 meters.

There are gaps , cracks, different depths and widths .

" The source is here," said the leader Nemesio Torrico place pointing to one of the biggest holes in the middle of the bush and next to a cornfield where the cracks continue .

The villagers reported that when the hole appeared calculated depth with a stick over six meters and fell inside.

Zelada Rosario told me last Thursday that first appeared a crack that crossed the road, but at the time it was bigger , even , saw water running out there because he had trained as a ditch .

The phenomenon has become a fact that frightens the residents of the agricultural area and that had never seen anything like it .

" Something is happening to the earth , we know that earthquakes have happened . That perhaps has opened . It is soft all terrain . That concerns us , "said Wanda Alvarado, who avoided getting too close to the holes for fear of ceding more .

Asked to do a study to determine the reasons for this phenomenon.

Some recalled what happened in March 2011 in the town of Villa Rivero , also in the Valle Alto, when between cracks and land subsidence fire burned .

" I am 72 years old, has never gone this is the first time. It can be as gasoline, we are not on with the match , "said Victoriano Alvarado resident adding that seemed out of the mud holes as lava.

The issue became a permanent comment from the locals, who repeated that began to open ( the ground) as if they were drawn first with a thin stick .

Cracks began to appear as the rains continued.

For the fact they found no explanation. The most worried neighbors called for studies to be conducted in the area.

RESEARCH manage Geotechnical Laboratory of the Universidad Mayor de San Simón ( UMSS ), Guido Leon, said it is not possible to explain the phenomenon without doing research in the area.

Until yesterday , the UMSS still did not know the case.

" It would have to make a hole and put bars to see if openings remain , expand or decrease ," he said .

He said that , a priori, one might think that the gully erosion relented , but that can not be said .

Punata Mayor Jose Gonzales, made ​​an on-site inspection . He associated the issue of the occupation of spaces that should be of the achicándolo river.

Agreed with community make the opening so that there is an eight- channel meters with lateral spaces .

But , being a rare phenomenon of " a crack has continuity to the other end and it can not happen that often ," said he ask the Government , through its technical , can perform the studies required . 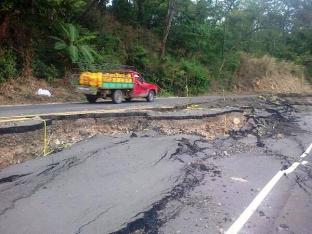 Citizens have complained via social networks the risk involved 125 km circular on the Longitudinal del Norte highway in Sensuntepeque, Camping, due to a crack of about 100 meters in length that is formed in the street and in a few months has been increasing its size.
As citizens of the road deterioration increases the risk of collisions and damage cushions vehicles passing the area.
The problem, according to the plaintiffs-data 2012, when the vehicular traffic in the area was enabled because it began with a series of problems due to a design flaw with which the road was built.
The Daily Page consulted Public Works Minister Gerson Martinez, who said that this problem is because there were no slope stabilization work to prevent the road deformed by the movement of the earth.
Source 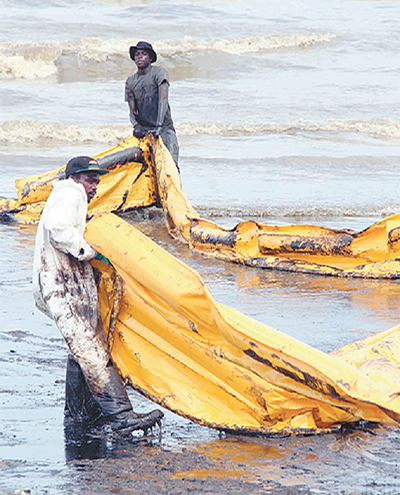 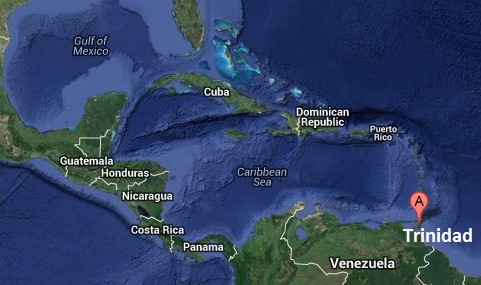 Five separate oil spills along Trinidad and Tobago's southwest coast have been threatening residents and marine life since Dec 17.

"A spill like the one in La Brea has not occurred in this country in living memory," said Energy and Energy Affairs Minister Kevin Ramnarine.

Gasket and pipeline leaks appear to have caused most of the problems, but Trinidad & Tobago is boosting security around fuel installations as a precaution against possible terrorism.

“What we are being told here is that about three to four miles of the beach, of the shoreline, is affected in this area," according to PETROTRIN president Khalid Hassanali,

The state-owned fuel company Petrotrin has evacuated residents from the impoverished fishing communities that line the coast in the area as crews worked to clean up the spills.

Fumes from the oil have caused nausea and headaches among residents, with 25 treated at hospital, according to media reports.

Crews on Sunday were trying to clean up the spills around hard-hit La Brea and three other coastal towns in Trinidad's southwest.

Petrotrin says dispersants and containment material have been spread around the fouled sites and fishing settlements have been evacuated.

Trinidad and Tobago government says it is seeking international assistance in dealing with the oil spill.