The same unusual phenomenon was also observed at the border between Syria and Turkey.

A meteor was reported in Thursday night in the Lebanese skies, especially over areas of Halat, and Bssalim Bickfaya. The same phenomenon was also observed in Beirut, the Bekaa, North, South and the Lebanese-Israeli border and the Syrian-Turkish.

Meteorites were clearly visible and several eyewitnesses were even able to take pictures of the phenomenon that is not common in Lebanese skies. 07.06.12. An unusual phenomenon was spotted in the sky over the Astrakhan Region on Friday night. It caused a stir in several Russian regions and in some Asian countries. An object with a spiral of light trailing behind it hovered in the sky for nearly 30 minutes. The Astrakhan Region’s Rescue Service received over 50 calls about the phenomenon.
http://en.rian.ru/video/20120608/173921225.html

07.07.12. Hundreds of Israelis called the Israel Police hotline on Thursday reporting they had seen an unidentified flying object glowing in the sky, leaving behind it a stream of smoke. The police's northern district said it was looking into the incident together with the Israeli Defense Forces but at this point they do not know what to make of it.
http://www.haaretz.com/news/national/watch-israelis-report-seeing-u...

Cosmic phenomena - and meteor showers (mysterious) luminous giant spiral - emerged yesterday between 9:30 p.m. 9:15 p.m. ET in the skies of Lebanon and in Syria and Turkey. 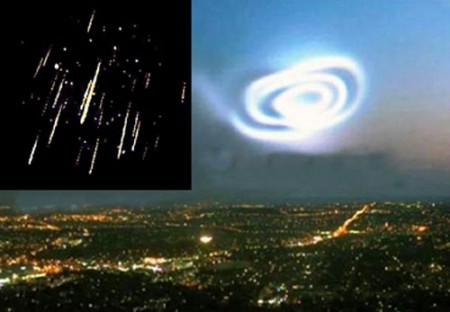