This could be significant, folks.  The mainstream article has a disclaimer that flowing water on Mars does not mean life ever existed there (yeah, right, sure), but this may be Zetas right again!

Mars may have had oceans

The idea that Mars once had oceans is a controversial one: It's been proposed before, and formations that look like shorelines have been found in images from a variety of spacecraft.

Now scientists, after analyzing data from the European Space Agency's Mars Express mission, have concluded that the northern plains of Mars may have had an ocean.

Mars Express' MARSIS radar, deployed in 2005, penetrates deep into the Martian surface. Scientists from the Institut de Planétologie et d’Astrophysique de Grenoble and University of California, Irvine, say that the first 60 to 80 meters of the planet's subsurface shows evidence of sedimentary material and ice, indicating that an ocean could have existed there.

Scientists are proposing not just one, but two possible oceans in the same area. The first ocean would have existed 4 billion years ago when Mars was warmer.

The second would have existed 3 billion years ago after Mars sustained an ice-melting impact. It would have been temporary since the water either refroze or vaporized into the atmosphere.

Evidence of oceans in this case doesn't indicate life, however, the scientists say. The second, temporary ocean probably wouldn't have existed long enough to sustain life, the French institute's Dr. Jérémie Mouginot said in a statement. To find life, astrobiologists will have to study parts of Mars' history when water may have existed for longer periods of time.  http://lightyears.blogs.cnn.com/2012/02/06/mars-may-have-had-oceans/?hpt=hp_c2

Life on Mars
Long suspected, but not confirmed. Mars has had surface water. Canyons have been created by the rushing water and evidence of great lakes along now-dry shorelines.

Incredible Pictures of Mars
July 16, 2008
http://www.dailymail.co.uk/sciencetech/article-1035440/
Ever since Victorian astronomers pointed their telescopes towards Mars and wrongly believed they had discovered canals, mankind has been obsessed by the red planet. Now these astonishing new images - captured by a European spacecraft in orbit around Mars - are helping to fuel that fascination. They show in astonishing detail a network of giant valleys, vast plains and towering waterfalls carved into the surface of our neighboring planet, millions of miles away. The latest images show the Echus Chasma, a vast valley just north of Mars equator around 62 miles long and six miles wide. The feature is cut into a high plateau and its steep-sided cliffs - some 12,000 feet high - bear a striking resemblance to the canyons of North America. Thunderous waterfalls may have once plunged over these cliffs, from the high Lunea Planum plateau that surrounds the Echus Chasma, on to the valley floor below. 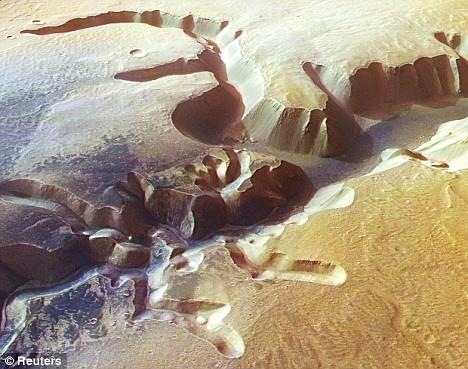 Per new analysis of material from Mars' surface, Mars not only had water, it had a climate sufficient to sustain life - warm and balmy.

New Data Pinpoint Mars' Wet and Balmy Past
July 16, 2008
http://www.breitbart.com/article.php?id=080716133503.n9m716c7&show_article=1
Water bathed the surface of southern Mars for millions of years, helping to create an environment theoretically capable of nurturing life. Scientists at Brown University in Rhode Island used an instrument aboard a US spacecraft, the Mars Reconnaissance Orbiter, to hunt for traces of phyllosilicates, or clay-like minerals that preserve a record of water's interaction with rocks. They found phyllosilicates in thousands of places, in valleys, dunes and craters in the ancient southern highlands. Mars was once awash with water, one of the ingredients for life. Still unclear is what happened to the oceans. The leading theory is that the planet's once-thick atmosphere began to thin, causing the precious liquid to evaporate into space. Only a thin atmosphere, consisting overwhelmingly of carbon dioxide, remains today.

Where did the water go? Man is still confused, and has no explanation for the loss of both the water and the atmosphere it generated. But the Zetas have long had an explanation. As with Earth, the Annunaki mined for gold on Mars, and used the water to wash their ore, sending it down into underground caverns while doing so. Thus, they ruined the ability of Mars to sustain an atmosphere, destroying Mars' ability to be a life bearing planet.

ZetaTalk Explanation 7/15/1999: Mars today is a dead planet, but in the recent past this was not the case. Some life bearing planets have a stronger footing than others, being closer to the warmth of a sun, for instance, and more particularly being a water planet like the Earth. Mars has little of that precious substance, and was a life bearing planet only where the freezing point had not trapped the water. The atmosphere surrounding a water planet can rebuild quickly, particularly in the components that support life. On a dry planet the atmosphere is fragile, and each rebuilding takes away more of the precious water. In the past, Mars sustained life to a level not unlike our home in Zeta Reticuli - moss and insects and worms. On such worlds there is not enough food in the food chain to support animals above that level, and setbacks occur repeatedly. A bug-eating reptile might get its start, only to die off during lean times, time and again. Thus such planets plateau.

Mars met its demise as a result of visitors from Planet X, who set up mining operations on Mars in preference to Earth where large carnivorous mammals roamed about in great numbers. Planet X has no such carnivores on land, and as large and muscular as these giant hominoid visitors are, they quaked at the thought. Where the atmosphere on Mars was thin, it was ample, so the visitors set about using what water resources they could muster to wash the ore they were after. In so doing they sought to control the run-off on the relatively flat surface of Mars, and did so in a thoughtless manner by directing waste water down a culvert. Thus precious water increasingly was sent underground, and a chain of events was set in motion that could not be reversed. The surface of Mars cooled as the atmosphere thinned, and the freezing surface accelerated this process.  http://www.zetatalk.com/newsletr/issue087.htm

"This is one more piece of the puzzle in the search for ancient life on Mars."

An international team of scientists has found new evidence of rivers that flowed on the surface of Mars billions of years ago — a discovery that could give us new insights into the search for ancient life on the Red Planet.

As outlined in a study published today in the journal Nature Communications, the scientists analyzed new, high-resolution imagery from the HiRISE camera on board NASA’s Mars Reconnaissance Orbiter.

“Unfortunately we don’t have the ability to climb, to look at the finer-scale details, but the striking similarities to sedimentary rocks on Earth leaves very little to the imagination,” lead author Francesco Salese, from Utrecht University in the Netherlands, said in a statement.. " Ancient river systems on Mars seen in unparalleled detail
Researchers have spent decades looking for evidence of ancient water on Mars. As technology has progressed, more evidence has ...

Long‑lost rivers give clue to life on Mars
The Martian landscape is arid and unforgiving, populated, as far as we know, only by a handful of robots dispatched from ...