Dozens of families fled from their homes after a landslide hit a village in Maco, Compostela Valley on Sunday, authorities on Monday said.

Several houses were also washed away as a river in Mainit village “changed course” following the landslide past 7 p.m.,  according to Abel Dagoon, village chief.

A portion of a hill in Zone 1gave way, dumping large volume of rocks and earth to a river there, virtually diverting its course and flooding the community, said Dagoon.

“A crack (found after the 2008 landslide) might have collapsed already, causing this. We are still assessing the extent of damage (of properties). Fortunately, no one was hurt,” Dagoon told the Philippine Daily Inquirer by mobile phone.

He said a family composed of at least five people was briefly trapped after the swollen river changed course and flooded the community. They were eventually rescued.

The landslide on Sunday “dammed” the river, causing it to swell and flood the community, Raul Villocino, provincial disaster officer, said on Monday.

Villocino said Mainit was just across Masara, the village hit by the 2008 landslides.

Local officials had declared Masara a no-habitation area following the killer avalanches, but several former residents have reportedly returned and resettled there.

Dagoon said residents were evacuated early Sunday night as the downpour began, spending the night at the village hall, the village elementary school and at a chapel.

Compounding the residents’ problem was the lack of electricity in the area after last month’s typhoon had knocked out power lines there, the village official said. 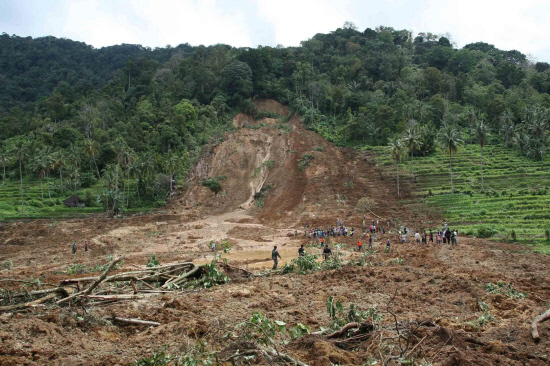 In Agam district, in West Sumatra province, 15 houses were buried beneath mud and rocks, killing seven.

Hundreds of terrified survivors fled their hillside homes for tents on safer ground, fearing more of the mountainside would collapse

In the neighbouring province of Jambi, a landslide occurred in a drilling field owned by a state-run energy company.

In a statement, PT Pertamina Geothermal Energy said that four of its workers had died, one remained missing and five had been injured.  Sixty workers survived the landslide, the firm said.

"The workers were having dinner when the landslide suddenly occurred." QUITO, Jan. 24 — At least seven people were killed and 17 were injured by a landslide Thursday in Ecuador’s mining zone of Bella Rica in the southern province of Azuay, local authorities said.

Patricio Lopez, the mayor of Ponce Enriquez, told reporters the landslide occurred early in the day due to heavy rains, causing damage to two mines in the region.

The mayor said several miners may have been trapped in the mines and the death toll may rise over the next few hours.

Four homes have also been damaged and Ponce Enriquez has been left without electricity.

Rescue units are at the disaster site, which is located in a rural area accessible only on foot or by plane, local authorities said.

Ponce Enriquez has a population of more than 10,000 and most residents work in gold mining or agriculture.

The region was previously affected by landslides that killed several miners. Ten days ago, a Peruvian and an Ecuadorian died in another landslide in the same area.