If you have any innovative planting methods for Aftertime that you like to share, your contribution is much appreciated.

I found this through youtube - I am yet to test it but the idea sounds great!

Grow a few potato plants, each or in their own wooden box, crib, barrel or wire cage. The container should be about 18x18 inches at the base, about 24-30 inches tall, and able to be gradually filled with soft soil or mulch as the vines grow. Set each container atop a well-prepared fertile soil. Plant one strong seed piece and cover lightly with 4 inches of soil. As the vines grow, gradually fill the container with mellow compost, mulch or soil, but always make sure you don't cover more than one-third of the vine's new growth. With some varieties, the underground stolons which produce potato tubers keep on forming new ones for some time. In containers the yield may be increased 200-3000 percent compared with open-field culture. This is a great way to grow a lot of potatoes in a very limited space. We recommend doing this with Yellow Finn, Indian Pit, Red Pontiac, or the fingerling types. Watering requirements will be greater however, so check the cages or containers frequently in warm weather.

We have lead-crystal batteries which tend to have higher voltage then other deep cycle batteries (when fully charged - above 13.2 V). They are excellent - can be stored for months, even years without discharging, no memory effect and long life. Also as the LEDs heat up, they are drastically changing characterstics.

So we changed our configuration as follows:

The fan is essential, but with the lowest possible RPM so it will last longer and draw low current.

On the input there is a simple variable voltage regulator with LT1083 http://cds.linear.com/docs/Datasheet/108345fg.pdf which is set to supply the circuit with 12.0V. One can power up to five circuits.

For the voltage 14.7V you can add 2 x 0.68ohm/5W (total 1.36ohm) resistors in series with the configuration. If you put larger resistors, they must be more than 5W because they will get hot.

Here is a very good article about batteries: http://www.windsun.com/Batteries/Battery_FAQ.htm#Gelled%20electrolyte

LEDs are connected in series with the resistor:

1 x 6 orange LEDs in series, no resistor (this is optional, you can add one line of reds instead)

Fan is optional, they are working fine at room temperature (around 60 C at max current). I don't know how it would work over 30 C, but it is recomended to put at least a small 50mm (2in) computer fan which will consume 0.07A (or 80mm consumes 0.15A).

The LEDs must be 1.8-2m above the seedlings (this has to be tested yet, maybe even more) and they will cover around 1sqm with the light. We put them at 1m and the seedlings got "sunburns".

It is essential to use the light (of course if there is no sunlight) in the initial phase, after the seeds have sprouted. It is the most critical phase, because without light, the seedlings will grow high and thin in the short period and will give a poor results. Also for the tropical plants (peppers, tomato, cucumbers) you have to secure higher temperatures (20C +), and for the cabagge family, the best is if they have between 10 and 20C.

The Zener diode can regulate voltage in a narrow range so I think it wouldn't work and it is not used for high current applications. Also it cuts voltage "in a primitive way" ie by shorting the + and - so it would consume a lot of current which we won't have in "unlimited" amounts like today.

Also, in the circuit above with Zener diode there is R which serves for voltage drop, and this R also is used in series with leds so it should be calculated well and with the switch of 2 or 3 resistors we can achive good results.

Better way would be a voltage regulator like LT1083/4/5 but I would like to keep it simple.

they are half $/piece.

The cooling fan is probably not needed because they are rated up to 100C but some get really hot (you can't hold your finger it) so the fan will definitly prolong their life.  But now we are opening another topic. They have nominal voltage and current. Those ones we use are 100mA nominally and 150mA max. The voltage is 2.3V for reds and oranges and 3.4V for others. But in the reality the voltage varies with every piece, so one line is much hoter than the other. We concluded this after the first set was made according to paper values and we saw that we get something different in reality. After the tests, we got that the average voltage for reds is 2.5V, orange 2.34V, blue and white 3.4V and UV 3.8V. The LEDs are current driven and if the voltage rises, the current will rise more and the LED will got hot which will increase the current even more and it will burn.  So they must have a resistor in series which will control the current.

In a few days we will have final values so I will try to post the schematics for those who are familiar with basic electronics. 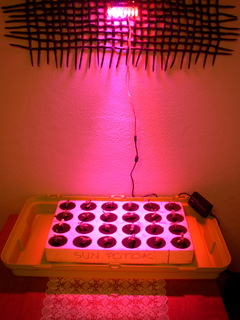 Cucumbers were pale, but have recovered after two days under the LEDs. You can see on the pic below the edge of the leave which is still pale. My husband orderd a lot of LEDs from China. They are 10mm 0.5W with narrow beam angle of 40 degrees. For now, he has made two sets of growing lights, each with 30 red, 6, orange, 6 blue, 2 cold white, 3 UV plus a fan for cooling. According to the given LED specifications, each set produces around 2800 lm which should be enough to substitute the sunlight. The light beam is rather focused and a small amount of light is dissipated. One meter above the seedlings, the beam covers an elliptic area of around 50x60cm. They are made for 12V DC and they are drawing 1.4A @12.6V (the fan consumes 0.2A).

I will post results after a few days of use.

From the last year, we have had a greenhouse and we have planted some vegetables earlier then usual to explore all the possibilities which greenhouses ofer. I would like to share some experiences. All seedlings were planted in January and they are in the house, so there is not enough light (probably we will have similar conditions in the aftertime) and the temperature was between 17-21 degree C.

Broccoli and  borecole did OK (not very good, but we will get something from them),  cabbage and cauliflower did very poor. All the plants grew high very fast due to high temperature, but without light they were thin and a lot of them became yellow and then dried. Although those plants don't tolerate a lot of sunlight and heat in the later phases, they obviously need a light at the beginning. Also it is better to let them grow in cooler conditions so they will have stronger stalk and roots.

A surprise to me were tomato seedlings which are growing excellent in that dim conditions, they only need warmth and water. Peppers also look good but they need more heat than the tomato (the best temperature for sprouting is 28C and it takes them around 3 weeks to sprout) so they are growing slower.

Cucumbers also became yellow in a few days and I put a growing light above them so we'll see if it will help.

We have planted 3 varietes of the mushrooms. Around 800 kg of woods, the expected yield is 20% (around 160kg). We are keeping it in a root cellar where they will not freeze and they have to be sprayed with water for a 2-3 months. After that they are going outside in the shady place. If that will develop well, I will write a blog about it. 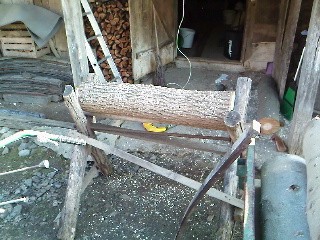 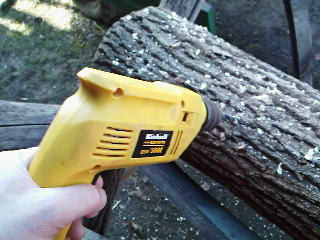 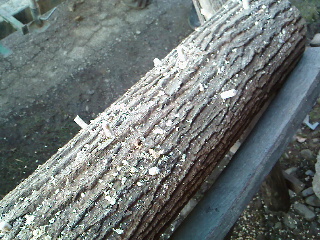 @Zeke, I know that scurvy grass (native to Scotland) very high in Vitamin C is a low-light plant. Sheep Sorrel which is a weed here in Wisconsin grows in the shade and very high in Vitamin C too, a salad green. I planted it in my garden though it is wild here too. I've heard that Spinach and Kale are not finicky either. And potatoes thrived in Ireland where they have dim sunlight often. Then of course there is  mushroom.