On location, the sea water looks have made ​​landfall local fishermen to residential areas. Fishing boats washed away almost everything, smashed rob. High tidal reaches an adult's knee. This condition makes the atmosphere of the coastline is quite gripping. These severe events are very rare. Even if the plug, not until crashing settlement.   A resident said Putu Juliadi is quite surprising events surrounding residents. Many of them had time to evacuate to higher ground. As a result of these events, all activities of local fishermen paralyzed. Not only the sea, trading activity was also suspended.

Dawan camat AA Gede Putra Wedana and Perbekel Pesinggahan Nyoman Suastika observed the resident to the location. They asked residents to remain vigilant to the recent bad weather. "Do not always go to sea, before the weather improves," said Suastika.

It is the southern tip of the tongue which is utterly devastated. Draw a line just north of the Malaysia border and over the top of Borneo. The land on the tongue from this point south will double its elevation loss, so that Java and the islands bordering the Banda Sea will find they have lost a full 80 feet in elevation, sinking many coastal cities and small islands out of sight. Singapore will be awash, its streets hopelessly inundated. Vast areas of the northern coastline of Sumatra and the southern coastline of Borneo will likewise be inundated. And if having the sea rush in were not horrific enough, the sudden drop in elevation will bring with it water from the Indian Ocean and the Philippine Sea which will create turmoil, unpredictable waves that clash and boil. There is no predictor indicating that the bend and drop are about to happen that we could point to. There are, as we mentioned there would be, indicators of the direction that the plates are being pushed, as Jakarta has been sinking, Pakistan sinking, and the Coral Sea floor rising. We are telling you your coastlines are not safe, and the rest is up to you! 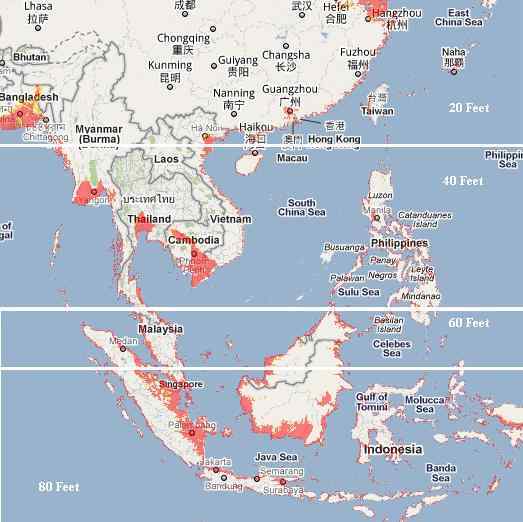