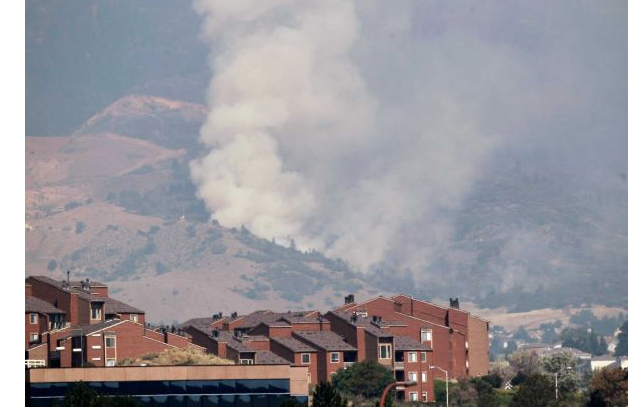 Feeling hot? It's not a mirage. Across the United States, hundreds of heat records have fallen in the past week.

From the wildfire-consumed Rocky Mountains to the bacon-fried sidewalks of Oklahoma, the temperatures are creating consequences ranging from catastrophic to comical.

In the past week, 1,011 records have been broken around the country, including 251 new daily high temperature records on Tuesday.

Those numbers might seem big, but they're hard to put into context — the National Climatic Data Center has only been tracking the daily numbers broken for a little more than a year, said Derek Arndt, head of climate monitoring at the center.

Still, it's impressive, given that records usually aren't broken until the scorching months of July and August.

If forecasts hold, more records could fall in the coming days in the central and western parts of the country, places accustomed to sweating out the summer.

The current U.S. heat wave "is bad now by our current definition of bad," said University of Victoria climate scientist Andrew Weaver, but "our definition of bad changes. What we see now will be far more common in the years ahead."

No matter where you are, the objective is the same: stay cool.

Wildfires pack intense heat, but soaring temperatures and whipping winds are piling on the men and women battling the blazes raging across the Rocky Mountains.

U.S. Forest Service firefighter Owen Johnson had to work overnight and avoided the piping-hot daytime temperatures in the region, which toppled records in Colorado, Wyoming and Montana. On Tuesday, Colorado Springs reached 101 degrees, and Miles City in eastern Montana soared to 111 degrees, the highest ever recorded in that area.

A call came in after Johnson's regular shift Monday in the Helena National Forest in Montana. A wildfire was racing through the Scratchgravel Hills, threatening at least 200 homes. But firefighters had to wait to pose a direct attack until midnight, when the temperatures cooled and the wind died down.

On Tuesday morning, Johnson figured he had worked more than 24 hours, and probably wouldn't quit until the sun went down.

His sweaty hands gripping a banana and a cup of coffee, he gave a tired shrug when asked to compare this fire to others in his 13-year career.

"Every fire's different," he said. "They all pose their own risks and challenges."

On the treeless, windswept Kansas prairie, the searing mix of sun and triple-digit heat is a recipe for agricultural disaster.

Some residents have taken to praying for rain and cooler temperatures in this sparsely populated western part of the state. Menlo farmer Brian Baalman can testify to that.

"Everybody is just sick of it. They just wish we would get a good rain," he said. "It has become a point to pray for it at church on Sunday, for sure."

Temperatures in the area have hovered around 111 degrees or higher for the past four days, and nine cities in western Kansas broke records on Tuesday.

Only in the earliest morning hours do hardy farmers dart out to ensure their livestock's water troughs are filled and their irrigation wells are quenching parched crops. They quickly return to cooler locales.

Much of the fortunes in the Menlo area are tied to corn crops, whose yields contribute not only to foodstuffs but also to ethanol-blended gasoline. But day after unyielding day of blazing sun and high heat have baked the top six inches of soil, and plant roots can break through to the moister soil below.

"It is getting to look ugly, the longer this keeps going on without a drink," Baalman said.

But nary a carriage rumbled down the streets — where it was already 97 degrees — because of a city ordinance.

“We have to take the mules in when it hits 95," tour guide Robert Rotherham said Wednesday, trying to coax his mule, Miss Pierre, to drink from a trough.

Stabling the carriages meant a glacial-paced day for drivers in a city where, absent special events, summer tourism is traditionally slow.

Tim O'Brien and Lacy Shanks of Kalispell, Mont, were grateful they had caught one of the early tours and glad they didn't have to hoof it. Their visit dovetailed with record-setting temperatures: Tuesday's 102 degrees toppled a more than century-old mark, 99 in 1893.

FRYING BACON IN THE SUN

Aaron Anderson and his 4-year-old son bypassed the proverbial cooked egg on Tuesday, opting instead to fry bacon on their driveway in Coweta, Okla.

Anderson's thermometer read 105 degrees around 4:30 p.m., about the same time his son, Aaron Paul, said it felt like his feet were cooking.

Sky-high temperatures aren't unusual in this part of the country, but it is warm enough this week that five records were set on Tuesday.

Anderson preheated the skillet for 10 minutes in the sun, and it took an hour for the meat to fully cook.

"My only regret is it was turkey bacon instead of pork bacon, but that's all we had," Anderson said.

NOT EVERYONE IS SWELTERING

In the northern corners of the United States, the weather was the opposite of infernal.

It looks like March, not June, in Seattle. People are clad in coats and scarves, using umbrellas to shield themselves not from the bright sun but raindrops.

Patty Carlson didn't think she'd need a sweater Tuesday. But there she was, ordering a latte at a downtown espresso shop.

"Take a look around the street," the 30-year Seattle resident said. "Would you guess it's June?"

Meanwhile, New England kicked off summer with 90-degree heat and high temperatures in Vermont and Maine.

But as Mark Twain famously summed up the region's fickle weather, "If you don't like the weather in New England, just wait a few minutes."

Last weekend, a summertime nor'easter, flooding and thunderstorms knocked temps down across much of New England, and temperatures dropped to the 60s in some parts Tuesday and Wednesday.

The yo-yo effect was felt at Ben and Jerry's ice cream stand in Freeport, Maine. One day, customers' ice cream was melting faster than they could eat it. The next, customers trickled away.

"The weather does have a toll on business," said co-manager Carey Lockard.

She has heard Twain's musings; customers often show up at the stand, his words on their tongues.

"It's amazing — the weather in Maine," she said.

'Life-threatening' heat warning across much of US -