With a name reminiscent of a cereal brand, "frost quakes" have splashed across media headlines in response to hundreds of reports of shaking and loud booms experienced around the Great Lakes since Christmas Eve.

Technically referred to as cryoseisms, frost quakes are an extremely rare phenomenon that up until December 24, 2013 was relegated to only a handful of reported incidents.

In fact, a frost quake is so rare that 30-year weather veteran and Environment Canada meteorologist Geoff Coulson hadn’t dealt with the phenomenon until local reports of unexplained booms and shaking started pouring in on Christmas Day.

“They are incredibly rare,” Coulson said in an interview on December 30. Source A cryoseism is defined as:

"Major frost cracking of the top few feet of the ground, occurring during sub-zero cold snaps, which generates localized ground shaking and is often mistaken for an earthquake." Source

After first being reported around Toronto, Ontario on Christmas Eve 2013, ground shaking and loud booms as far away as Vermont and Illinois were also soon attributed to this formerly unheard of phenomena.

1.  The first piece of evidence against the "frost quake" explanation rests with the historical reporting of cryoseisms.  Over the past 10 days, dozens of articles have appeared on internet news media with numerous reports of frost quakes from Illinois to Vermont, yet prior to this, one is hard pressed to find more than a handful of incidents, with most occurring after 2003.

2.  The next compelling argument against the frost quake explanation is the incidence of shaking and loud booms reported in regions that did not experience extreme cold during the same timeframe:

3.  Lastly, the locations of all the reported booms and shaking during this brief time portrays the tear points along North America's rock strata undergoing an excruciating diagonal stress from the Christmas Hammer's formidable annual assertion.

4.  What remains is the disemboweled carcass of yet another desperate Main Establishment Lie intended to misinform and redirect the public from any awareness of the nearby presence of Planet X, aka Nibiru.

"The cover-up crowd is reaching for any excuses they can throw out to explain the Earth changes caused by Planet X. The Earth wobble has gotten more obvious, the Sun out of place and the weather wobbles following. The earthquake increase has been denied by reducing the magnitude of quakes and purging the quake databases, but even with these maneuvers the increase is statistically obvious. Fracking has been blamed for earthquakes, and now the Winter temps are to blame for the booming of breaking rock around Toronto, along the spreading seaway. Will these excuses fall away after the announcement? Expect them to increase, as the cover-up crowd will become like a cornered animal, more vicious and extreme."

"The Christmas Hammer is caused in great part by the December switch in Magnetic Trimester which occurs, as we have explained, at approximately December 17 on the Earth calendar. This forces a magnetic adjustment in all magnetic planets, and great stress on the Earth which is locked into a magnetic dance with Planet X."

"The magnetic trimesters are echoing what we have frequently referred to as particle crowding, occurring elsewhere in the Universe in such a way as to influence the flow of magnetic particles in the vicinity of your solar system. Your Sun is dominant in his little neighborhood. The planets align with the Sun but in their own little backyards are likewise dominant. But the solar system is swayed by a larger magnetic field which encompasses the solar system. In fact, your human scientists have discovered this, finding the solar system delineated by what they termed a magnetic ribbon.

Why should this divide into three phases, when magnets on the surface of Earth have no such phases? This is a pulse, from afar, and not relevant to mankind's future on planet Earth. Suffice it to say that this pulse is divided into 3 parts, and they line up remarkably well with a 4 month period, each being a third of an Earth year. Did the Earth arrive at her orbit of 365 days in a year in part because of this magnetic pulse? Indeed, and this also relates to why the Earth and the Sun both tilt in a certain direction, magnetically. Were we to estimate more precisely the point when the pulse changes, it would be more akin to December 17, April 20, and August 12. But there is a slight period after the end of a phase when a particle crowding has not yet subsided, or an increase in particle flow has not yet registered. Thus, the end of those months is most accurate as a guide."

While the media predictably attributes this crack to be the result of a frost quake, this region experienced equivalent cold in 2006. It is also in the same proximity where booming was reported in 2012 and land cracks appeared in 2010. 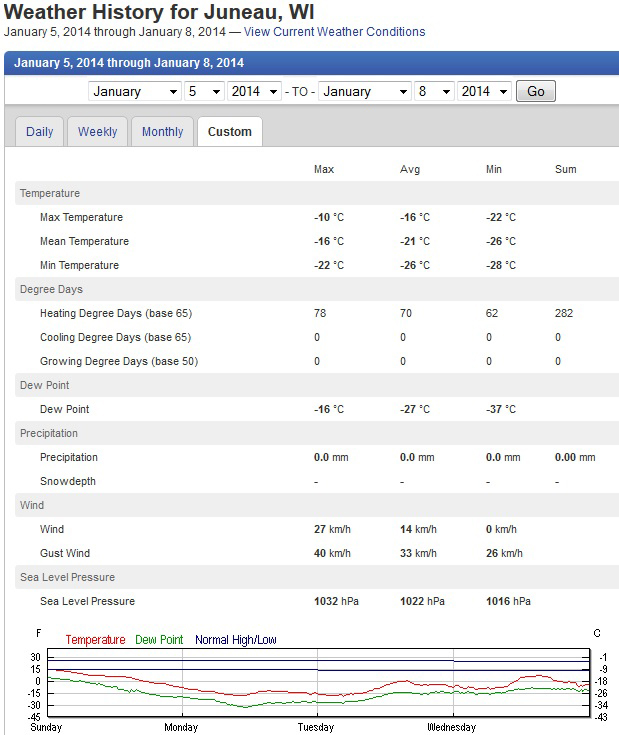 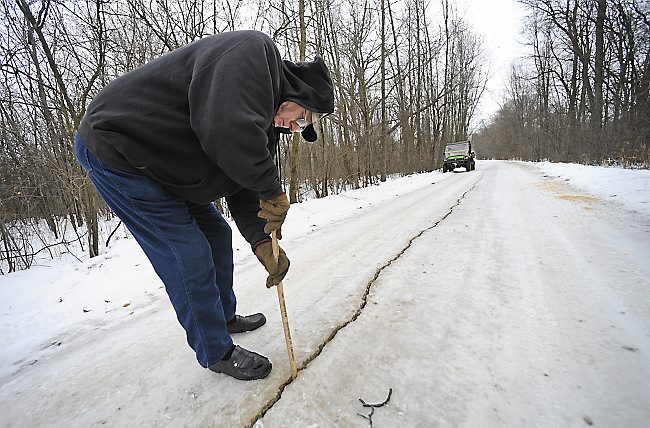 More booms and rare quakes over the past 24 hours in alignment with today's rare 5.1 quake off Cuba. Since Jan 6, loud booms and shaking from Maine to Indiana blamed on frost quakes.