Flooding inside Penang airport ‘an embarrassment’ 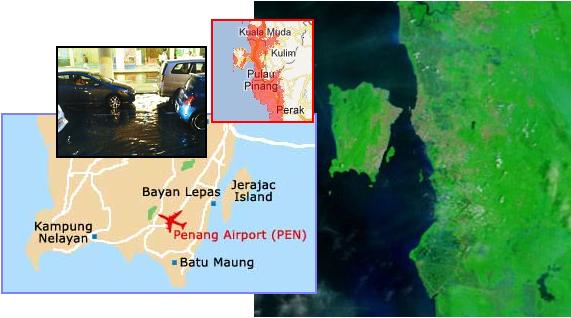 Evidence of sinking in Penang, Malaysia

PETALING JAYA: Transport Minister Kong Cho Ha has been urged to resolve the “flooding” at the Penang International Airport, which is proving to be an “embarrassment to the state government”.

In a is letter to Kong, Penang Chief Minister Lim Guan Eng said the “one inch of water floating inside the terminal” was akin to a state of “distress” and an “extreme embarrassment” to the country.

“I am sure the minister (Kong) will agree that it is an extreme embarrassment to the country to have one inch of water floating inside the terminal of an international airport.

“As the airport is the first impression people get of Penang and in many cases, of Malaysia, I strongly urge the minister to intervene directly to resolve this problem,” Lim said.

Lim’s letter to Kong was dated yesterday and a copy was released to the media.

In the letter, Lim also identified three major reasons that has led to the airport being in distress.

Among the major reasons is the delay in the airport expansion project.

Lim also pointed out that defective workmanship at the airport had contributed to the leakages and flooding.

“Whenever it rains, it will flood not only outside but up to one inch inside the airport terminal,” he said.

He added that this in turn caused massive inconvenience to countless airport users, but worse still, also damaged their luggage.

Lim also said that the situation in Penang International Airport is “extremely serious and reveals a systemic failure in the whole project”.

The airport is on the fringe of the sinking areas, which are CLEARLY evident on MODIS!

That's their comment, its an 'embarassment'? Nothing about their sunken lands, their displaced people?

“Whenever it rains, it will flood not only outside but up to one inch inside the airport terminal,”

Whenever it rains? What more evidence of land subduction does one need?

he would, by now, be very well aware of Zetatalk and this ning, (as all world leaders and their governments are... see below), and yet he still persists in lying to the populace.  What happens when the populace wake up to this fact?  It will be more than embarrassing!  The Armys of this world read Zetatalk as well, and are the common man, armed with the truth.

The 2011 G-20 Summit was held November 3-4, 2011, in Cannes, France; it seems safe to assume world leaders took advantage of these face-to-face meetings to discuss Planet X and the pending pole shift. Could the Zetas comment on or enlighten us regarding what occurred during this summit (e.g., what the mainstream news did not or could not report)? [and from another] http://en.wikipedia.org/wiki/2011_G-20_Cannes_summit The 2011 G-20 Cannes Summit is the sixth meeting of the G-20 heads of government in a series of on-going discussions about financial markets and the world economy. The G-20 forum is the avenue for the G20 economies to discuss, plan and monitor international economic cooperation. The summit resulted in little progress on the issues under discussion. Attending: Argentina, Australia, Brazil, Canada, China, France, Germany, India, Indonesia, Italy, Japan, Mexico, Russia, Saudi Arabia, South Africa, South Korea, Turkey, United Kingdom, United States, European Union. Invited: Ethiopia, Singapore, Spain, United Arab Emirates.

We have repeatedly stated that discussions about the pending pole shift are done face-to-face, to avoid an accidental breach in the cover-up. Phone calls or email even if encrypted, written correspondence even carried by courier - all are likely to be vulnerable to discovery or hacking and then the cover-up is broken. So great is this fear that any legitimate face-to-face meetings are consumed with talk about the real concerns, which are certainly not the economy. The economy can be discussed over the phone, after all! Imagine the G20 as a dance, where the partners come with their hopes and wares. This one has beauty and that one wealth. This one has neither, and is hoping for pity. And despite promises made, after the dance in the cold light of day after the pole shift, matters will be so different from what these power brokers anticipated.

What are the hot topics? We have seen indications that Australia has become a hot spot for the elite, with a visit from the Queen, a new US base, and Abu Dhabi investing there. Australia's ultra-right government is welcoming the elite, especially if they bring funds and muscle, as the plan is to jump Antarctica and the new land to emerge in the south Atlantic before others can lay claim. That Africa is also a target for takeover in the Aftertime is no secret. Zuma, the current president of S Africa is openly shopping for partners, and will facilitate entry into his country based on what they offer him in return. Thus those vulnerable to takeover, such as the majority of Africa, and those courting partnerships, such as Australia and S Africa, are the popular dancing partners during such conferences.

Even among those heads of state who do not yet take the ZetaTalk message as a given, a truth, there is nervousness due to the 7 of 10 scenarios slowly unfolding. The steady sinking of the Sunda Plate cannot be denied, nor the predicted crush and tiltin

It is time the people of Malaysia knew the truth.