Is this the Dark Twin, making an appearance on the NASA magnetosphere BATSRUS images just to the right or left of the Earth on the images? It is indeed, but why is it moving about? The satellites providing data for these images are many, positioned all around the Earth, near and at a distance, and provide data about many particle flows affecting the magnetosphere. The ACE, WIND, SAMPLEX, and the Stereo satellites participate, among others, most orbiting the Lagrangian point between the Earth and Sun. The models producing these images are computer programs, which have been instructed on how to interpret various particle flows.

Thus the appearance of the black dots on the images, caused by the near presence of the Dark Twin, is a conglomeration of information from satellites in various positions around the Earth – to the front, back, side, and at a distance. The composition of the Earth is shown as a black circle, central to the modeled images. It should be no surprise that objects formed of rock, such as Venus, the Moon, or the Dark Twin would show up also as a black dot. Venus is far enough away to be excluded, and the Earth’s Moon is too small to be included, but the Dark Twin is closer to the Earth than Venus, and is as large as the Earth. Thus the particle flows from the Dark Twin are not ignored by the computer programs employed by the BATSRUS model.

What do the various positions of the Dark Twin on these images imply about the position of the Dark Twin during these dates, which show the Dark Twin switching about between the right and the left in the images, either in front of or behind the Earth. Satellites collecting data are not taking a picture of what is at a distance, they are recording particle flows in their vicinity, and can misjudge for elements they were never programmed to consider. The Dark Twin is directly behind the Earth at present, and closer to the Earth than ever before. But satellites behind the Earth and to one side will interpret a 2D particle flow view of these two hunks of rock as being side by side, or this or that one ahead of the other. This is a program failure, a modeling failure, on how to interpret a 2D image into a 3D model.

Earth's Dark Twin reappeared on BATSRUS May 16th and is still visible per the below animation. 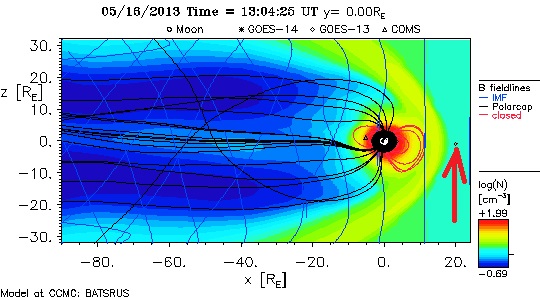 NASA has introduced some new anomalies on BATSRUS images and chosen to attribute them to being either the Moon or other satellites.

Yet this new tack fails to explain why similar anomalies observed on BATRUS over a year ago are far beyond Earth's gravitational vicinity.

There's also the question of why the symbol used to identify Earth's Moon hasn't appeared on a regular and consistent basis prior to this new symbology.

Note that the triangle in the below image appears only on the first 3 frames after the Dark Twin's appearance at 21:28 (aka place marker) and is not defined in the new symbol key beneath the time stamp.

Interesting that NASA's latest "redirect" also coincides with yet another severe compression and particularly conspicuous diffusion of Earth's magnetic field by the nearby presence of Planet X, aka Nibiru.

Earth's Dark Twin was nearly continuously visible on BATSRUS one year ago. As the below animation shows, it was also positioned further away from Earth in early March 2012, suggesting the eddy cup has tightened considerably in the past year.

"The eddy flow cup that Earth and Venus and the Dark Twin are caught in becomes progressively smaller as Planet X approaches, as the strength in the flow of particles coming round the sides of Planet X is more dense, thus like a rapidly flowing river, has more pressure to push the hapless planets caught in the cup toward its center. When at a distance, these particle flows have dissipated, but still have the capacity to buffet the planets into the cup because there is a difference in the crowding rate, less in the center, more at the periphery. The closer Planet X comes, the more intense, like the claw arms of a crab starting to close about its prey."  ZetaTalk