TELESCOPE, Grenada (AP) — The old coastal road in this fishing village at the eastern edge of Grenada sits under a couple of feet of murky saltwater, which regularly surges past a hastily-erected breakwater of truck tires and bundles of driftwood intended to hold back the Atlantic Ocean.

For Desmond Augustin and other fishermen living along the shorelines of the southern Caribbean island, there's nothing theoretical about the threat of rising sea levels.

"The sea will take this whole place down," Augustin said as he stood on the stump of one of the uprooted palm trees that line the shallows off his village of tin-roofed shacks built on stilts. "There's not a lot we can do about it except move higher up."

The people along this vulnerable stretch of eastern Grenada have been watching the sea eat away at their shoreline in recent decades, a result of destructive practices such as the extraction of sand for construction and ferocious storm surges made worse by climate change, according to researchers with the U.S.-based Nature Conservancy, who have helped locals map the extent of coastal erosion.

Dozens of families are now thinking about relocating to new apartments built on a hillside about a 10-minute walk from their source of livelihood, a tough sell for hardy Caribbean fishing families who see beachfront living as a virtual birthright.

If climate change impact predictions come true, scientists and a growing number of government officials worry that this stressed swath of Grenada could preview what's to come for many other areas in the Caribbean, where 70 percent of the population live in coastal settlements.

In fact, a 2007 report by the Nobel Prize-winning Intergovernmental Panel on Climate Change said the devastation wreaked on Grenada by 2004's Hurricane Ivan "is a powerful illustration of the reality of small-island vulnerability." The hurricane killed 28 people, caused damage twice the nation's gross domestic product, damaged 90 percent of the housing stock and hotel rooms and shrank an economy that had been growing nearly 6 percent a year, according to the climate scientists' report.

Storms and beach erosion have long shaped the geography of coastal environments, but rising sea levels and surge from more intense storms are expected to dramatically transform shorelines in coming decades, bringing enormous economic and social costs, experts say. The tourism-dependent Caribbean is thought to be one of the globe's most vulnerable regions.

"It's a massive threat to the economies of these islands," said Owen Day, a marine biologist with the Caribsave Partnership, a nonprofit group based in Barbados that is spearheading adaptation efforts. "I would say the region's coastal areas will be very severely impacted in the next 50 to 100 years."

Scientists and computer models estimate that global sea levels could rise by at least 1 meter (nearly 3.3 feet) by 2100, as warmer water expands and ice sheets melt in Greenland and Antarctica. Global sea levels have risen an average of 3 centimeters (1.18 inches) a decade since 1993, according to many climate scientists, although the effect can be amplified in different areas by topography and other factors.

In the 15 nations that make up the Caribbean Community bloc, that could mean the displacement of 110,000 people and the loss of some 150 multimillion- dollar tourist resorts, according to a modeling analysis prepared by Caribsave for the United Nations Development Program and other organizations. Twenty-one of 64 regional airports could be inundated. About 5 percent of land area in the Bahamas and 2 percent of Antigua & Barbuda could be lost. Factoring in surge from more intense storms means a greater percentage of the regional population and infrastructure will be at risk.

In eastern Grenada, people living in degraded coastal areas once protected by mangrove thickets say greater tidal fluctuations have produced unusually high tides that send seawater rushing up rivers. Farmers complain that crops are getting damaged by the intrusion of the salty water.

Adrian George is one of the coastal residents preparing to move into an inland apartment complex built by the Chinese government following the devastation left by Hurricane Ivan.

"I'm now ready to move up to the hills," George said in the trash-strewn eastern Grenadian village of Soubise, which is regularly swamped with seawater and debris at high tide. "Here, the waves will just keep getting closer and closer until we get swept away."

One response in the wealthier island of Barbados has been building a kilometer-long breakwater and waterfront promenade to help protect fragile coastlines. In most cases, international money is pouring in to kick-start "soft engineering" efforts restoring natural buffers such as mangroves, grasses and deep-rooted trees such as sea grape. Some call that the most effective and cheapest way to minimize the impact of rising seas.

But in the long run, "we need to move our centers of population, infrastructure, et cetera, out of the areas likely to become vulnerable to rising seas," said Anthony Clayton, a climate change expert and the director of a sustainability institute at Jamaica's campus of the University of the West Indies.

Where to rebuild will be yet another challenge, with the region's islands mostly rugged and mountainous with small areas of flat land in coastal areas.

Even with the Caribbean so threatened, many islands have been slow to adapt, and awareness of the problem has only recently grown. Last year, the European Investment Bank announced it would give $65 million in concessionary loans to help 18 Caribbean nations adapt, while conservation groups try, among other projects, to restore buffering mangroves and set up fishing sanctuaries to help fringing reefs recover. The Caribbean Community Climate Change Center in Belize is managing the regional response.

Yet not everyone is convinced that climate change is as dire as forecast.

Peter De Savary, a British entrepreneur and major property developer on Grenada's famed Grande Anse Beach, said the availability of capital, energy costs and the health of the global economy are far more imminent concerns than rising sea levels. He notes that most existing beach resorts will have to be rebuilt anyway in coming decades due to normal wear and tear so projected climate change impacts won't require much attention.

"If the sea level rises a foot or two it really doesn't make any difference here in Grenada because we have beaches that have a reasonably aggressive falloff," De Savary said. "If the water gets a few degrees warmer, well, that's what people come to the Caribbean for, warm water, so that's not an issue."

Shyn Nokta, who heads Guyana's office of climate change, said there's ample evidence the impacts will be less benign. Warming ocean waters have helped to significantly degrade the region's protective reefs, and threats to Caribbean coral are only expected to intensify as a result of ocean acidification due to greenhouse gases. Rainfall also has become increasingly erratic.

Many are also girding for climate change's impacts on an already fragile agriculture sector and drinking water quality and availability.

"The weather and climate system in the region is changing," Nokta said from Guyana's capital of Georgetown, which sits below sea level behind a complicated system of dikes and is extremely vulnerable to flooding.

Inequalities in income will play a big role in determining how the suffering is meted out island to island, said Ramon Bueno, a Massachusetts-based analyst who has researched and modeled climate change economic impacts for years.

"A low-income family living by the shoreline, with limited access to clean fresh water and earning a living from tourism, fishing or agriculture is vulnerable in a way that a middle- or high-income professional living in good air-conditioned housing at higher elevation inland is not," Bueno said.

That portends a dire future for people such as Allison Charles, a subsistence farmer in Grenada's coastal village of Telescope, a fact she said she's well aware of.

"It's hard now. Already our plants are getting burned by the salt water coming up the river," Charles said in her village, framed by Grenada's rugged hills. "I can't really imagine what the future will hold." 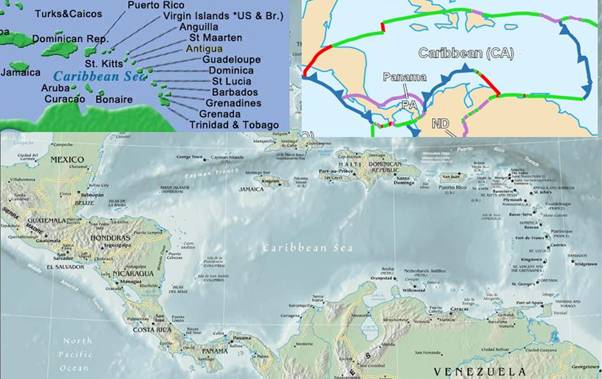 “Aruba, Bonaire, and Curacao ride on the hump, and thus will survive. The island chain along the eastern edge of the Caribbean Plate was formed when the Caribbean Plate was pushed up during expansion of the Atlantic. But this is countered by the hump of S America pushing the Caribbean Plate down, overall. Thus those islands in the chain close to S America will lose in elevation, while those islands at the top of the chain will not. From Antigua south, the islands in this chain can expect a minimum of an elevation drop of 57 feet, on average, with this being irregular throughout due to the trauma to the area. Islands just to the north of S America will be affected the most such that Barbados to Tobago may sink entirely except for the highest points, losing several hundred feet in elevation, and Trinidad will be torn apart in addition to sinking as it rides on the plate border.”