SOZT
Though apparent in the early photos of Planet X, aka Nibiru, when it first arrived in the inner solar system in 2003, the double helix swirl appearance in the Moon Swirls are forming not around the corpus, but around a single or double Moon Swirl. Planet X has lately shown a ringed appearance.
http://www.zetatalk.com/ning/19ap2014.htm
Why this sudden change in appearance? We have explained that the Moons within a Moon Swirls develop this dance because of the attraction and simultaneous repulsion
http://www.zetatalk.com/science/s123.htm
that so much of the matter in God’s Universe develops. Perpetual motion.  These long tubes of dancing partners is the basis of light rays,
http://www.zetatalk.com/index/zeta91.htm
and the reason that light can be broken into many facets by a prism.

Planet X has a double helix appearance
http://www.zetatalk.com/ning/12ju2010.htm
when rapidly traveling due to two large Moon Swirls that are equal in mass, so neither takes dominance in being closest to the corpus of Planet X. The shoulder pad appearance of the complex, when seen from the front as it rapidly entered the inner solar system in 2003, was captured on film several times at that time. The check-mark Moon Swirl
http://www.zetatalk.com/newsletr/issue336.htm
has always been noted for dual minor Moon Swirls on either side of a dominant moon.
http://www.zetatalk.com/index/zeta564.htm
It is thus on record that both Planet X and some of its dominant moons can have shoulder pads that develop into a swirl.

Now the swirling shoulder pads are making a strong appearance in Alberto’s photos, and on more than one Moon Swirl. In fact, in one of his photos, it appears that two different Moon Swirls have begun a dance, without being joined by a dominant moon at the center. What is causing this sudden change?  The Moons within each Moon Swirls are in a dance behind the dominant moon in the swirl, and the reason the long tubes form behind this dominant Moon are due to the same attraction and repulsion and consequent spin that causes photons in light rays to form tubes. Dust and debris HIDE the dance the individual moons in the tube perform, yet it exists. We have mentioned that the vast tail of Planet X is being blow closer to Earth, as Planet X itself is coming closer. More detail is being seen, for this reason.
EOZT Sunrise image with monster to left, it's clear that change position often. Alberto

Nancy's Comment: I see the Planet X corpus in its expected position (for the morning hours as the Ecliptic slant changes during the day), but the Moon Swirls are also increasingly showing a swirling pattern. Humm, will ask the Zetas this week. 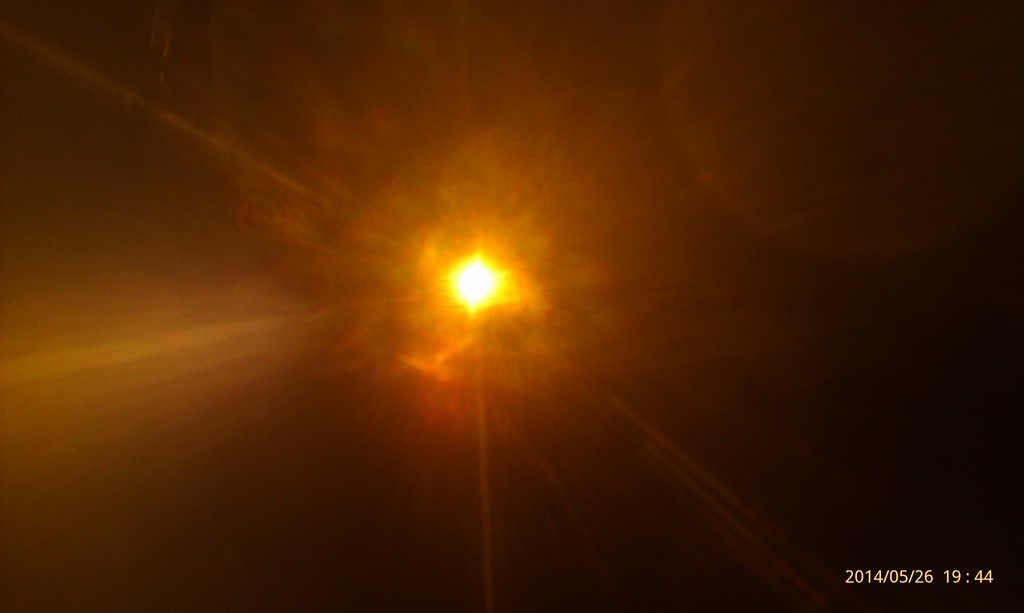 Note monsters, up right and curious round  object or body in different position as side by side to sun. Ciao Alberto.