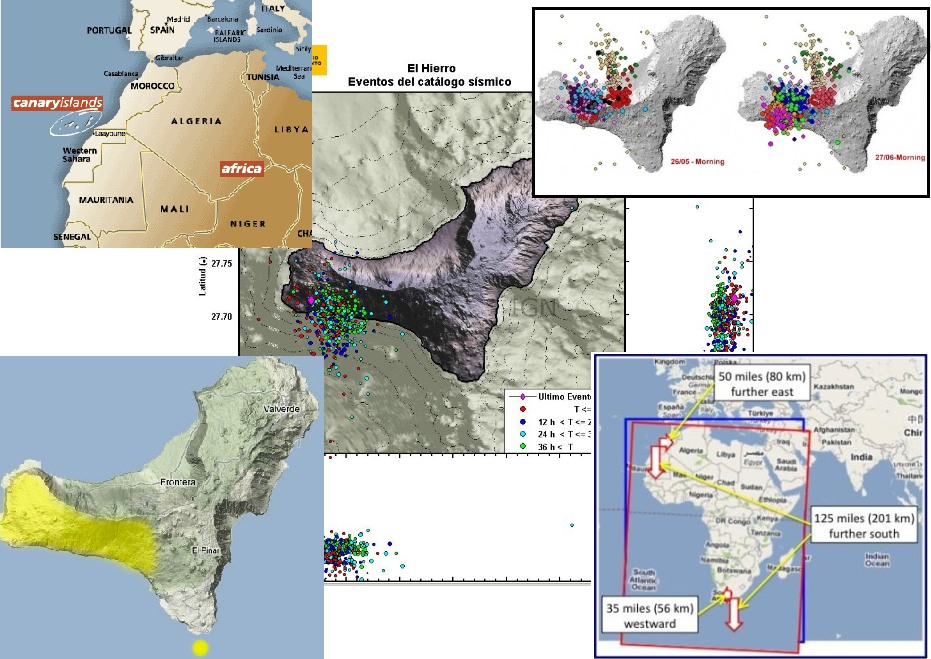 Scientists on El Hierro say the island has grown taller by 5cm as a result of the latest seismic activty, which has generated large amounts of magma underneath the surface.

Fears continue to grow that an eruption could take place in the near future, following another 60 tremors yesterday. The head of the island's Cabildo, Alpidio Armas, has courted controversy by expressing his hope that an eruption will occur on land instead of undersea because it 'would attract many tourists' to see the spectacle.

- Since 12:41 UTC, harmonic tremor and earthquakes started to pick-up again. Our readers checking our pages a number of times a day should check the depth and the location of the earthquakes after 12:41 UTC. The increased HT is a new magma flow who fills up new lava tubes, cracks etc. Once it is filled up it HT will decrease again.

- Since 12:40 UTC, a strong tremor signal and many stronger quakes have been recorded. A series of about 10 strong volcanic quakes (probably well >M2.5) occurred between about 13:00-13:10. Magma is moving again, but we have to wait to see the location of the quakes. "We have observed a deformation of the entire island. The center of the deformation originates in the present earthquakes area (see below)
The energy release and ground deformation show an acceleration of the active magmatic process on the island of El Hierro, according to information forwarded by the National Geographic Institute at the direction of the Civil Protection Plan for Volcanic risk (PEVOLCA)
The GPS network solution, measuring the surface strain on the island shows that there is a clear process of inflation, marking an apparent center of pressure in the area where the seismicity is located. The total cumulative displacement from 24 June to 24 hours yesterday, is about 3-4 cm in the horizontal components and 4-5 cm in the vertical component.
Since the beginning of the new magmatic process on June 24, there have been over 750 earthquakes. An earthquake with a Magnitude 4.0, occurred yesterday at 18:55 pm in the Las Calmas Sea, 2 km from the coast and 20 km deep.
Be remembered as the seismicity started in the El Golfo bay, then moved to the center of the island, coinciding with the point of intersection of the ridges, and later migrated to the west. Since the 25th of June the seismicity is concentrated in the west and El Julan. From 12:00 hours. On 27th of June, seismicity began to migrate towards the Las Calmas sea." 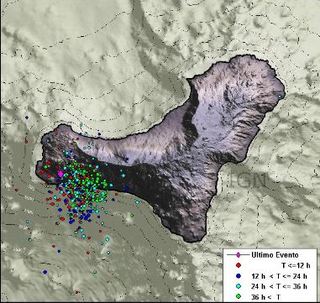 The noticeable increase in seismic activity this week on El Hierro has led the local authorities to activate contingency measures in anticipation of a possible undersea eruption.

Hundreds of tremors have been recorded on the island since the week-end, some of them measuring a worrying 4.0 on the Richter Scale. The population has been urged to take precautions, including keeping a suitcase packed should evacuation be ordered, in case the situation worsens. As last year, the volcanic activity comes as El Hierro is preparing for the summer tourism season.

Following days of almost continual earthquakes, residents of the small Canary island of El Hierro are once again living in fear of a volcanic eruption as their island begins to lift.

According to the National Geographic Institute of Spain, increases in seismic activity on the island has seen literally hundreds of earthquakes, known as a swarm, shaking the island and gradually increasing in strength since June 25. Around 750 earthquakes have been recorded although few have been strong enough to be felt by the residents until the last two days
The island has been placed on yellow alert by the security committee in charge of operations as the earthquakes increase. The largest so far was registered at 4.0 on the Richter scale on Wednesday June 27.
More frightening for the approximately 10,000 residents is the fact that a bulge has developed in the island, lifting it five centimetres in four days. Whereas the volcanic activity of 2011 was based out at sea, this time the magma appears to be forming right underneath the island and the pressure is building. Scientists on the island are using the position of the earthquake epicentres to try and work out where the magma from the volcano will come to the surface.The longer it takes to find a vent, the more the pressure from the magma will grow and the larger any possible eruption is likely to be.
http://www.digitaljournal.com/article/327552 INVOLCAN, the Volcanological Institute of the Canaries, along with PEVOLCA (the Civil Protection Plan for Volcanic Risk), has raised the alert status in parts of El Hierro to “Yellow” after increasing signs that we could be headed towards new eruptive activity in the Atlantic Island. The increased seismicity reported over the weekend was part of the rationale, however, new data suggests that the 2-3 centimeters of deformation have occurred over the last few days, all supporting the notion that magma is intruding under El Hierro. Remember, when magma intrudes the crust, it has to make room for itself, so deformation is one of the tell-tale signs of this intrusion (however, deformation can occur due to other processes as well, but combined with seismicity, magma is usually a good culprit). This new deformation is centered to the northwest of the submarine vent that opened last fall, putting it near the El Julan and La Dehesa areas on the coast. As for the seismicity, the island registered over 200 earthquakes on Tuesday alone.

It has been a few months now since the eruption at El Hierro in the Canary Islands was declared “over”. There may be some passive degassing on the seafloor from the new vent that formed at depth to the south of the island, but things had settled down. Even the people of Restinga were putting the eruption in the past, with both webcams taken offline and the guarantee of €600,000 (~$750,000) from the government to aid fishermen whose livelihoods had been altered by the closed fisheries.

However, with any active volcano, it can be difficult to predict when exactly an eruptive cycle is truly done. Over the last few days, seismicity under the island has resumed and its manifestation is very similar to what we saw last summer during the lead up to the eruption of El Hierro in October 2011. Over 50 earthquakes have been recorded at El Hierro, some as large as ~M3.5 and AVCAN thinks that the new seismicity suggests that magma is moving in the same conduits as the fall 2011 activity. The earthquakes are, as of now, still deep – upwards of 15-25 km below the surface. This likely supports the idea that there is new magma entering the El Hierro system at depth. Now, last summer it took months of constant seismicity before we saw any surface manifestation (the submarine vent at ~88 meters depth), so we may not know if this new intrusion of magma will lead to new eruptions until the fall. At El Hierro, Canary Islands, Spain, a new earthquake swarm seems to have started late tonight.  The strongest earthquake being a M 3.1

Also you can find info about previous activity (November 2011) of El Hierro volcano below:

Update 06/07 – 14:28 UTC
- A new Pevolca reports confirms what we have written earlier today and yesterday. Additionally IGN has reported that also the islands of Tenerife and La Palma are moving horizontally. The El Hierro activity cannot be the only reason for this horizontal deformation. IGN also sampled air and water in the earthquake epicenter area and has found no abnormal values. 04-07-2012 @ 07:57 – A helicopter from the Emergency and Rescue Group has been sighted around the Mar de Las Calmas area of El Hierro, and about 180 yards offshore, a bubbling effect on the sea surface has been identified whose origins scientists have not yet been determined.
http://www.canariesnews.com/2012/07/03/el-hierro-update-page/

"Will La Palma volcano in the Canary Islands, which is already damaged, experience an earthquake and fall into the sea prior to the pole shift and thereby cause a huge tsunami? It has long been postulated that the Canary Islands are fragile, and will collapse into the sea upon another quake, creating a tsunami. This is a human theory, and absurd. First, monstrously high waves are not caused by displacement of water across the ocean, as water moves in all directions, and the pressure reduces steadily during the distance traveled. Do these human theorists presume that tunnel vision exists in the ocean, such that pressure only moves in one direction? This is akin to the human propensity to divide what they are dealing with into tiny bits, and only consider a bit at a time, as though putting the bits together is too much of a headache. Thus, Newton's supposed Laws are considered separately from Einstein’s math, as they don't work together. A land slide, under water, will create not a force of water moving across the ocean, but a void causing water to fill that void. Thus, a swirl of water, moving into the void and then out again, would occur, locally."