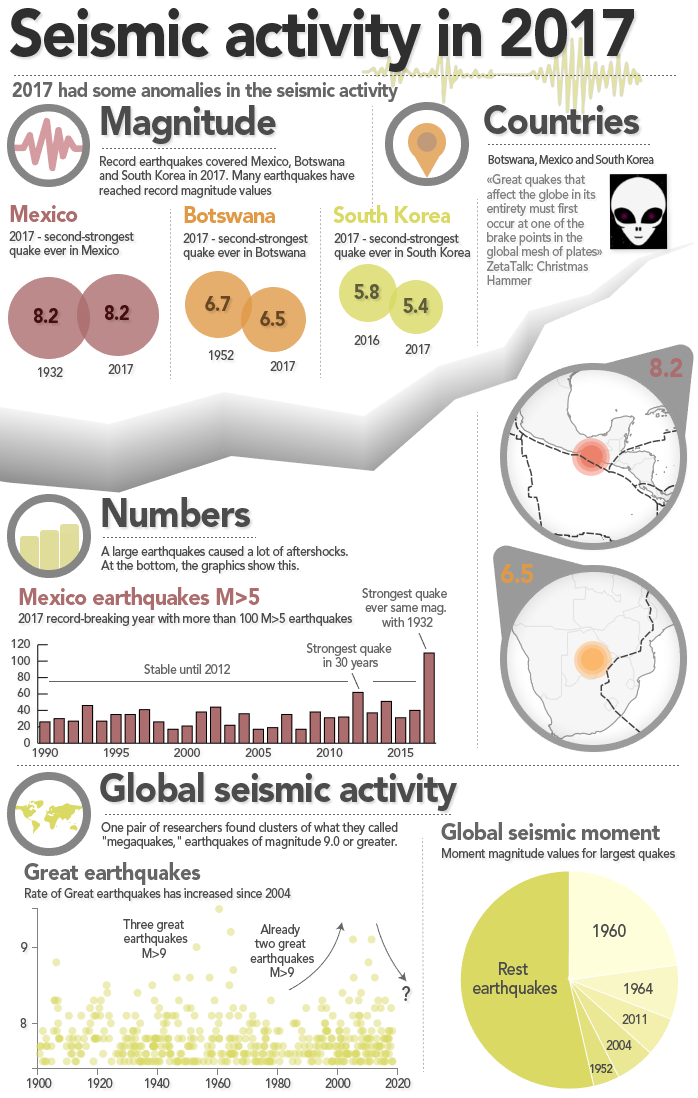 Zetas predicted that earthquakes will increase in strength and frequency. It really happened. Although this growth has no linear or exponential character. But has the form of clusters. This is confirmed by some scientific articles: 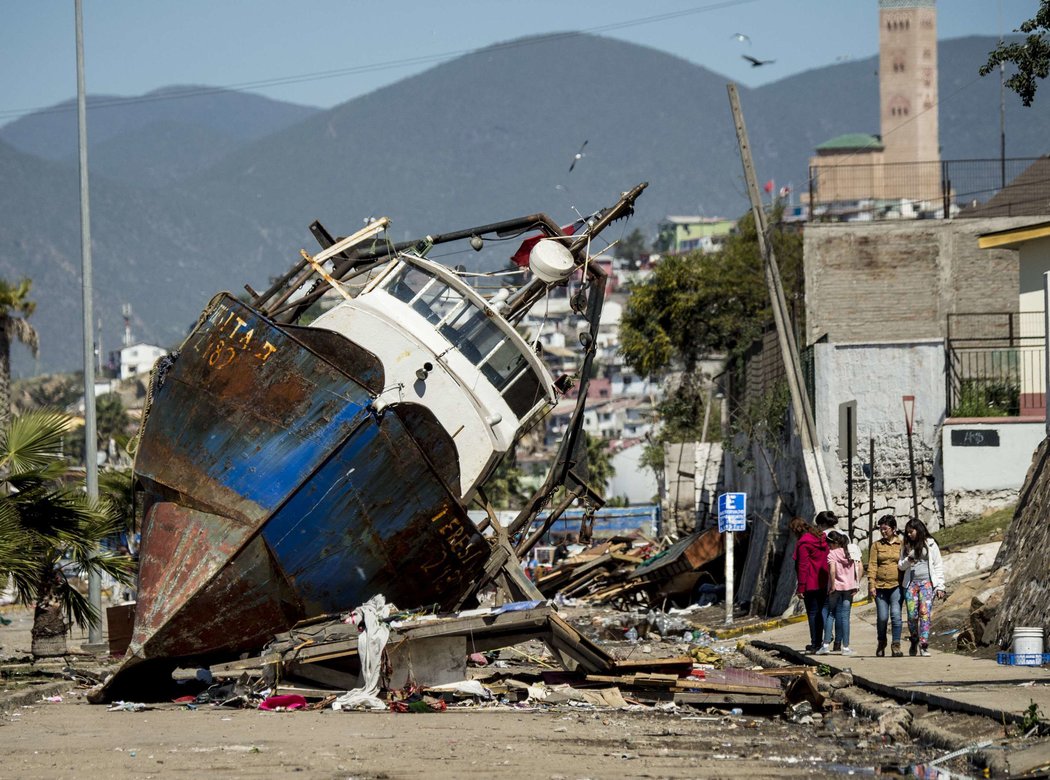 A grounded fishing boat on Thursday in the Chilean port of Coquimbo, north of Santiago. There were at least 11 deaths as a result of Wednesday's earthquake. Credit Martin Bernetti/Agence France-Presse — Getty Images Image source: nytimes.com

We can quickly verify this assumption, (without any graphs and etc) M>9 earthquakes:

Strange yea? 2004 is an incredible coincidence.

Although some articles say that this is statically insignificant. That is too short a period of observation in order to draw any conclusions. [29] In the end, the cluster of the 1960s was stronger. 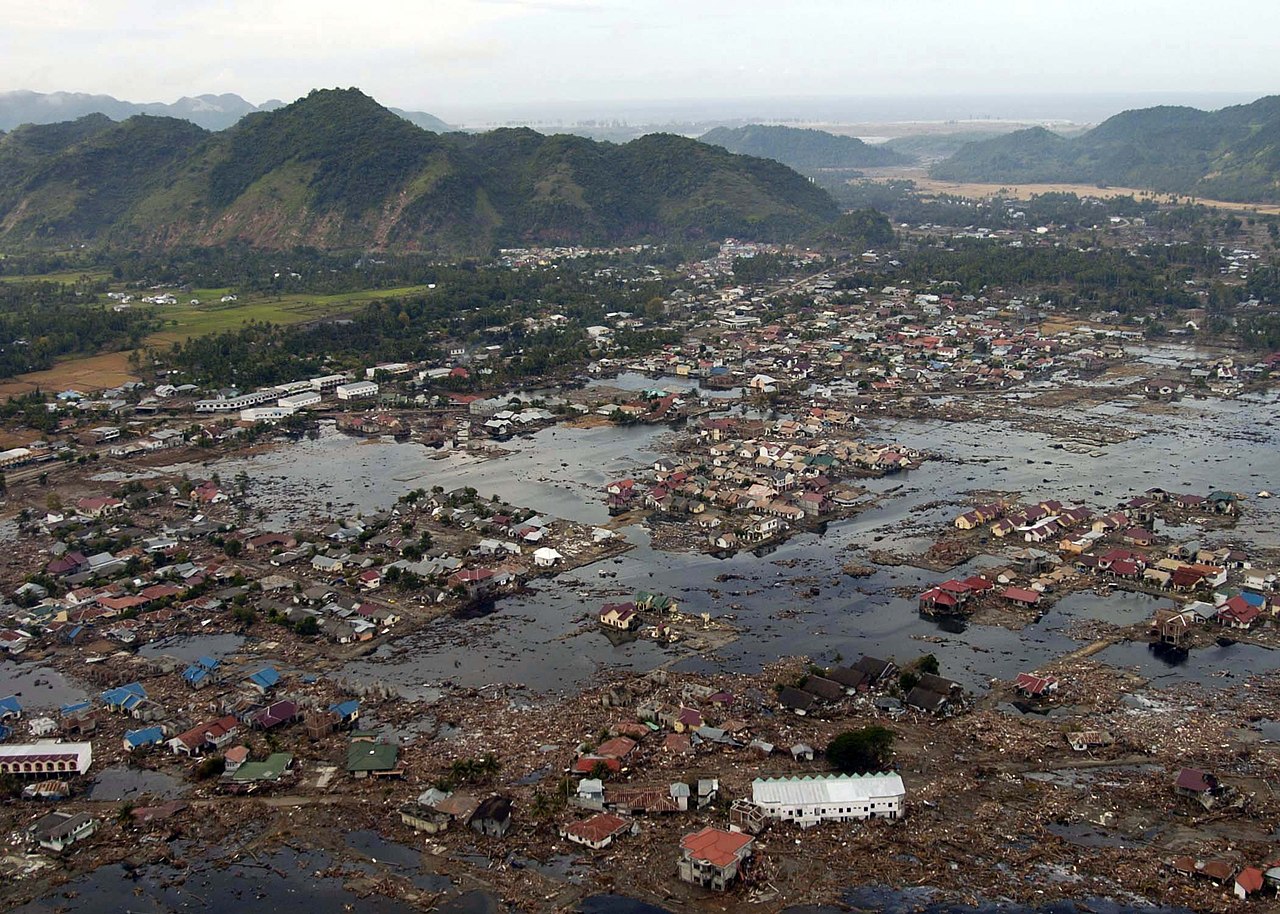 It's noteworthy that many large earthquakes took place near Sumatra (2004, 2012 and etc): 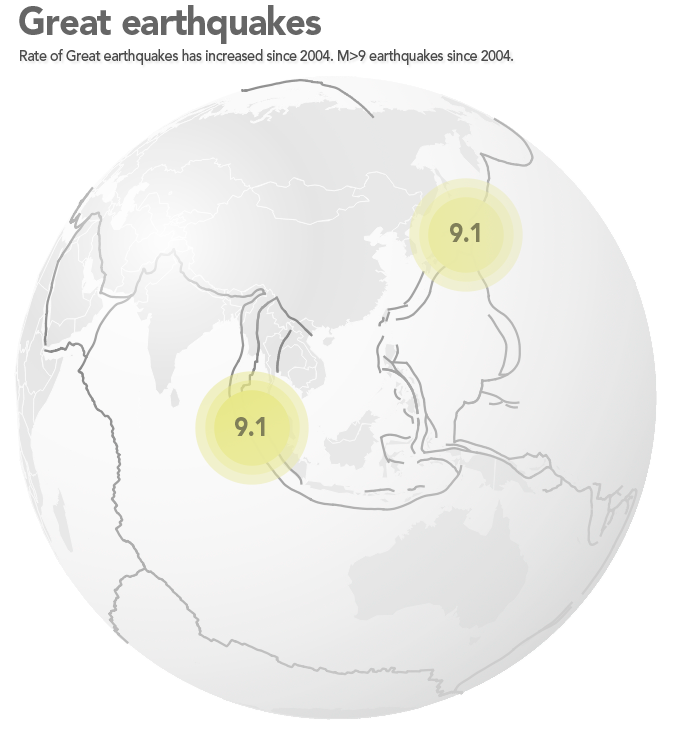 The 2004 cluster also set some records Record earthquakes have recently increased. And below is a small statistic that shows this. Not all countries have their seismic networks. Some data are not available. 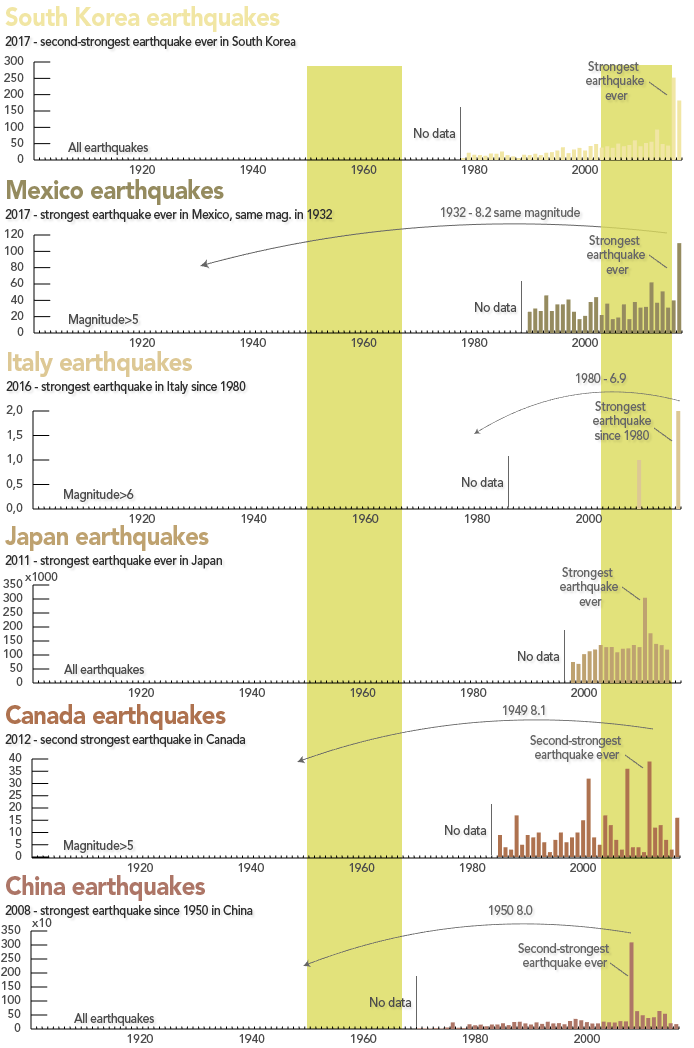 We see that the strongest/record earthquakes have more significance than many small ones. 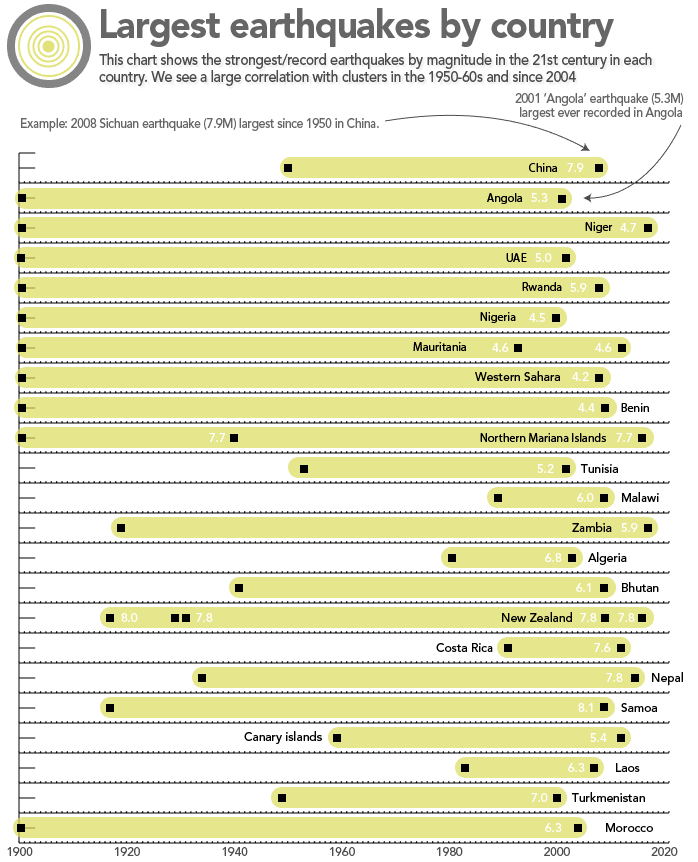 It's pretty incredible. We see that the large record earthquakes have increased

Last year had some records of seismic activity. 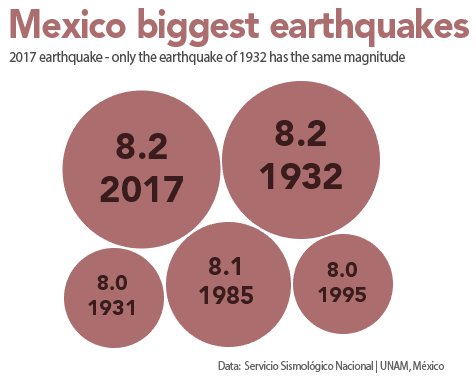 Until 2012, the situation in Mexico was stable. But in 2012 the situation changed, with the strongest earthquake in the last 30 years. The chart below shows this: 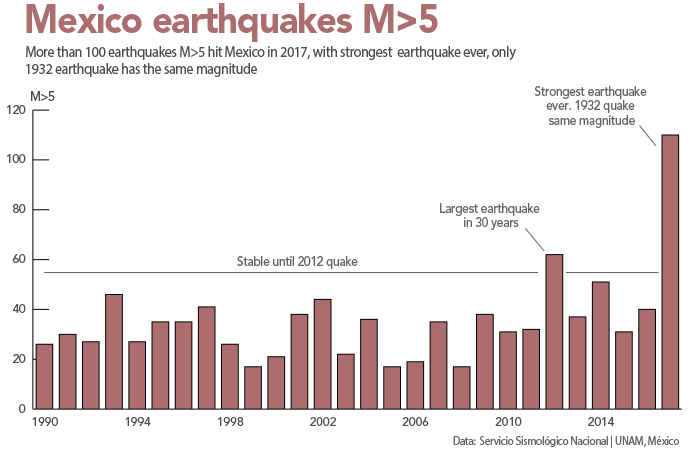 Later the situation stabilized. And again the explosion in 2017 with a record earthquake. From this graph we can conclude: small earthquakes don't matter! It also shows the graph below: Small earthquakes are only aftershocks from large/record quakes. We also need to take into account some factors, for example, the increase in seismic stations and etc: 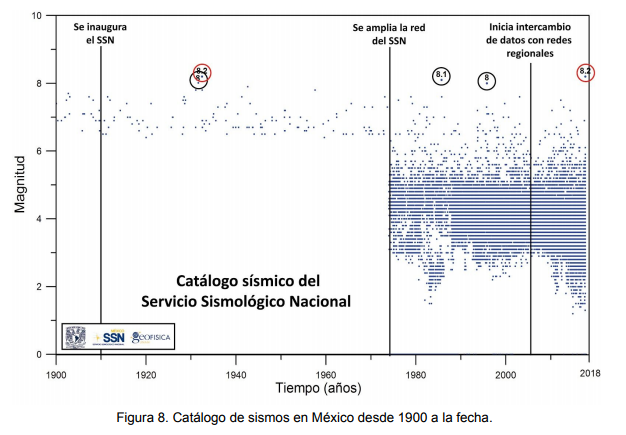 "Figure 8 shows the earthquake catalog in Mexico from 1900 to date. The horizontal axis represents the years and vertical axis the magnitude of the earthquakes, is clearly appreciates that since the expansion of the Seismic Service Network National Seismological Survey in the 1970s, it was possible to detect and locate more earthquakes of magnitudes less than 6. Since the National Seismological Service began to exchange data with regional seismic networks it was possible to detect number of small earthquakes in the Mexican Republic. In Figure 8, the 5 earthquakes of magnitudes greater than 8 that have been recorded since there are seismic instruments, are presented in circles. These five earthquakes are those that are observed in Figure 7, the two red circles represent the 2 earthquakes of magnitude 8.2 that have occurred in Mexico during that period of time. The last of them is the September 7 earthquake of 2017 in Chiapas." [24]

Thus, it's the large/record earthquakes that are the indicator of seismic activity.

"4 October, 2017. The ongoing earthquake swarm at the Yellowstone National Park supervolcano is now one of the longest ever recorded, having started on June 12. Over the past three and a half months, almost 2,500 earthquakes have been recorded in the western part of the national park. This puts it on a par with the biggest swarm ever recorded, where more than 3,000 earthquakes took place over three months. <...> This story has been corrected to reflect  that the current swarm is one of the longest on record, rather than the longest. The swarm in 1985 was longer if the tail end of seismicity is taken into account. " - [23] writes Newsweek

This summer two earthquakes shook North Texas within just weeks of each other. The U.S. Geological Society (USGS) recorded temblors in the Irving area of magnitudes 3.1 and 2.7, on August 27 and September 1, respectively. The USGS did not record earthquakes of that magnitude and frequency in the region since before 2016, according to a recently published seismological report." -  [22] writes Texasmonthly

Scientists have noticed the strange nature of this earthquake because of its unusual origin. Vladimir Kostoglodov, a seismologist at UNAM in Mexico City, called this earthquake "extremely strange". [21] Now move to Africa, Botswana. In early 2017, there was a very rare and unusual earthquake. This earthquake was a record or, to be more exact, the strongest in the history of Botswana! [7] Later the Geological Service lowered the magnitude and now it's the second-strongest earthquake after 1952 6.7 quake. [25] According to the US Geological Survey 1952 quake - 5.8. In general, the current earthquake is in any case a record. 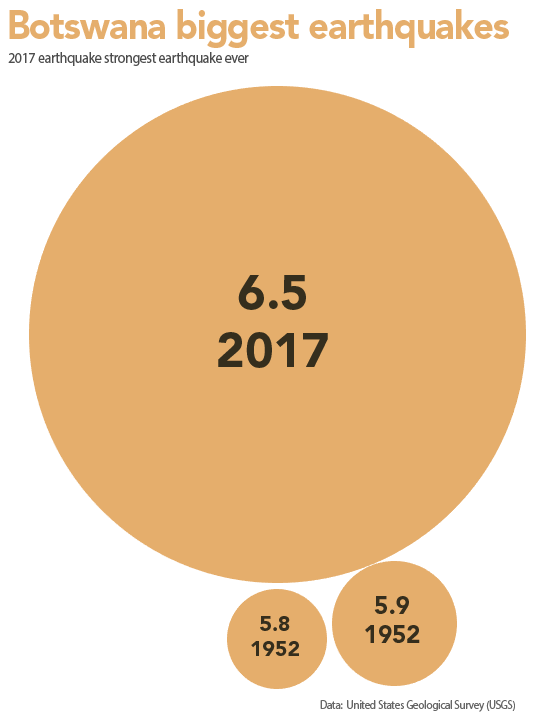 In addition to the record magnitude, this earthquake became unusual/abnormal: 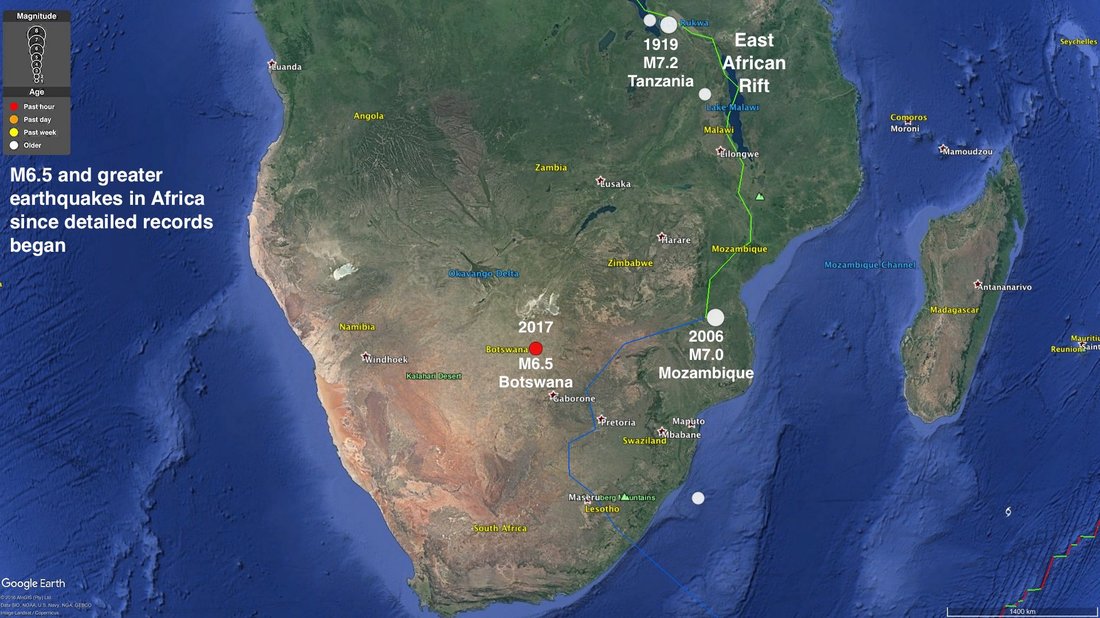 Map showing earthquakes of magnitude 6.5 and greater that have occurred in Southern Africa since detailed records began (1900 onwards). Image source: [26]

Earthquakes in Botswana are extremely rare. Given that this event has occurred over 1000 km from the nearest tectonic plate boundary, we call these types of events 'intraplate earthquakes'.<...> The central and western areas of Southern Africa are assumed to be tectonically very stable. The geology of the region is typically referred to as the 'Kaapvaal Craton'. Craton means a strong region of a continental tectonic plate that are typically stable for over a billion years. The Kaapvaal Craton contains rocks that are 3.6 to 2.5 billion years old. Large earthquakes in such stable tectonic environments occur very rarely. <...> 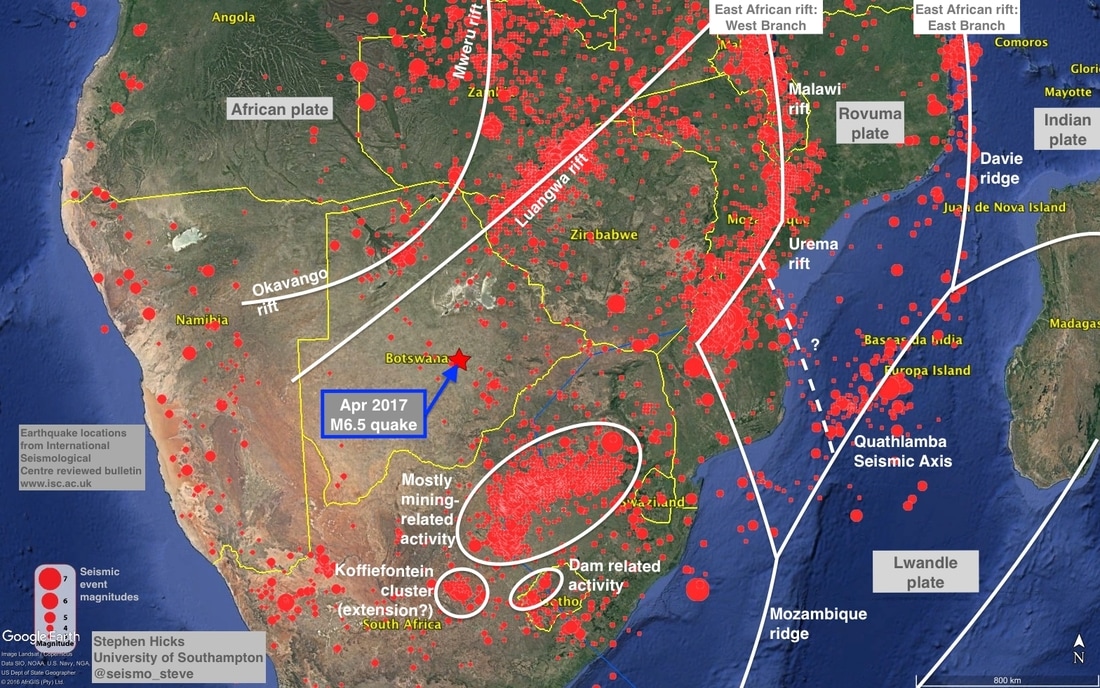 One research paper from the 1980s studied the nature of the geological contact between Kaapvaal and Limpopo further to the east in South Africa. Based on small changes in gravity across the two groups of rocks, the study interpreted that this geological contact demarcates an ancient (pre-Cambrian) plate boundary between two colliding plates. Is it therefore possible that the inherent weakness of this ancient, billion-year-old plate boundary ruptured during the 2017 Botswana earthquake?" [26]

Thus, an earthquake occurred in an area that is considered seismically safe. Very strange earthquake. Korea historically considered safe from large earthquakes. But since 2016, this is not so! 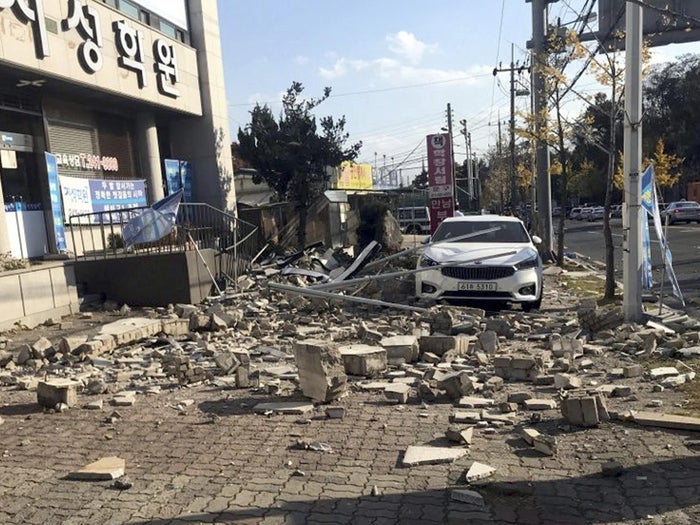 Debris from a collapsed wall is scattered in front of a shop after an earthquake in Pohang Min Kyung-suck/Newsis/AP. Image source: independent.co.uk 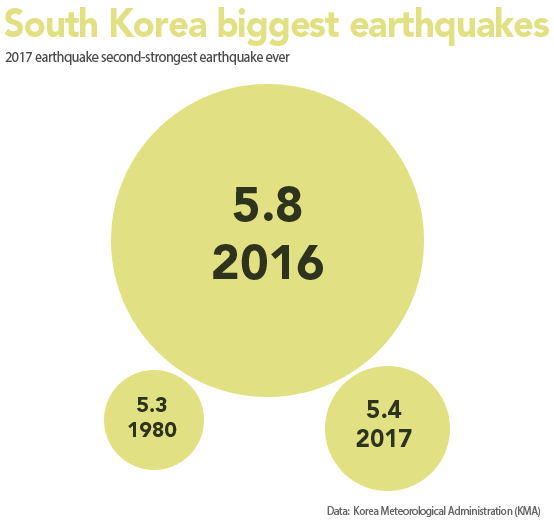 "15 November, 2017.  Another South Korea earthquake more cause for alarm about seismic activity.

A magnitude-5.4 earthquake shook southeastern South Korea today, marking the largest in the nation since last year’s trembler in nearby Gyeongju. The Korea Meteorological Administration stressed that South Korea is no longer free from earthquake threats. Seismic activity has reached a new phase since last year’s Gyeongju earthquake. A total of 139 quakes of magnitude-2 and above have been detected this year alone, which is more than twice the historical average. South Korea had been known to have little seismic activity compared to neighboring Japan."

Following a magnitude-5.0 earthquake detected near waters off the southeastern city of Ulsan on Tuesday evening, experts voiced concerns that the Korean Peninsula is no longer safe from strong shock waves, calling for prompt disaster preventive measures."

Induced seismicity in US, Canada and Mexico

“The practice of underground disposal has been used by the industry for 70 years, yet the uptick in seismic activity has only occurred in the past few years.”- Oklahoma Sen. Jim Inhofe, chairman of the Senate Environment and Public Works Committee. [35]

"The majority, but not all, of the recent earthquakes appear to be the result of natural stresses, since they are consistent with the regional Oklahoma natural stress field" - OGS POSITION STATEMENT-OKLAHOMA EARTHQUAKE ACTIVITY February 17, 2014 [36]

"Fracking has been a process used extensively for decades, since 1903 within the US alone. If fracking caused earthquakes, has this just been noticed? This is clearly an excuse for the increase in earthquakes, one of many the establishment will latch onto as earthquake frequency increases and earthquakes occur in unusual places"

The official reason for the increase in the earthquakes in the Southeast US - wastewater disposal. [30] For those who don't know this increase, not only in the central US but also in Canada and in Mexico. And fracking is again accused [32], [33]

There is a lot of conflicting information. Example:

Recently, an article appeared that buries another theory - wasterwater injection: 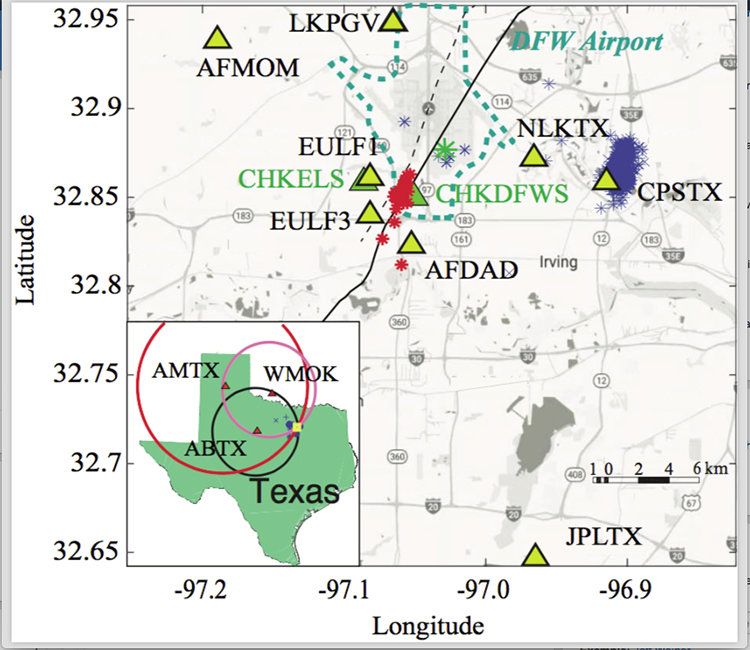 Efforts to stop human-caused earthquakes by shutting down wastewater injection wells that serve adjacent oil and gas fields may oversimplify the challenge, according to a new study from seismologists at Southern Methodist University, Dallas. <...>

The sequence of quakes began in 2008, and wastewater injection was halted in 2009. But earthquakes continued for at least seven more years." [31]

Although the theory- wastewater disposal - continues to live. OK. How to explain this:

[23] Osborne, H. (2017, October 05). Yellowstone supervolcano has been hit by 2,500 earthquakes in one of the longest swarms ever recorded. Retrieved March 10, 2018, from http://www.newsweek.com/yellowstone-supervolcano-earthquake-swarm-l...

Thank you so much for the STAGGERING amount of work you have put into researching and presenting this information.