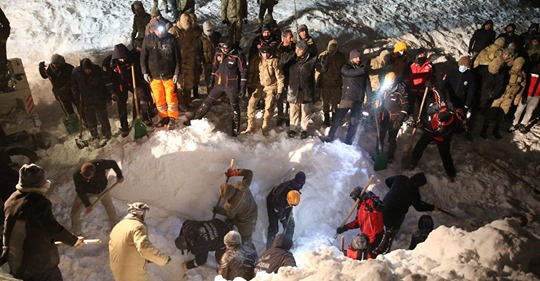 An avalanche has slammed into a mountain road in eastern Turkey, wiping out a huge team of rescue workers sent to find two people missing in an earlier avalanche.
Officials said 23 rescue workers were killed while others were still buried under the snow.
Wednesday’s avalanche increased the overall death toll from the disaster to 28.
Some 300 emergency service workers were called to a road near the mountain-surrounded town of Bahcesehir in Van province, which borders Iran, after an avalanche struck late on Tuesday, killing five people.

Governor Mehmet Emin Bilmez said 25 emergency service members were rescued from under the snow and taken to hospital. This takes the death toll to 28 in total.

There was no further information on their conditions.
Five people were killed and two others were missing after the first avalanche buried a snow-clearing vehicle and a minibus. The vehicle's operator and seven passengers escaped alive.

The second avalanche struck on Wednesday as hundreds of emergency workers were searching for the two missing victims, private NTV television reported, adding that fog and heavy snow were hampering the rescue efforts.
State-run Anadolu Agency said the operator, Bahattin Karagulle, was trapped beneath the snow for some 25 minutes before he managed to break a window and escape.
The agency quoted him as saying that he walked towards a village before he was picked up by a vehicle and managed to seek help

An 18-year-old woman died in Zushi, Kanagawa Prefecture after a slope on the side of the road collapsed Tuesday morning, local police said.
According to the local fire department, the slope near the lower part of a condominium near Jimmuji Station on the Keikyu Zushi Line collapsed in a massive pile of earth around 8 a.m. Tuesday, and the female pedestrian was found unconscious and transported to a hospital, where she was confirmed dead.
Authorities were checking to make sure no others were hurt in the incident.

A cliff collapses on a road near the Dead Sea
February 4, 2020 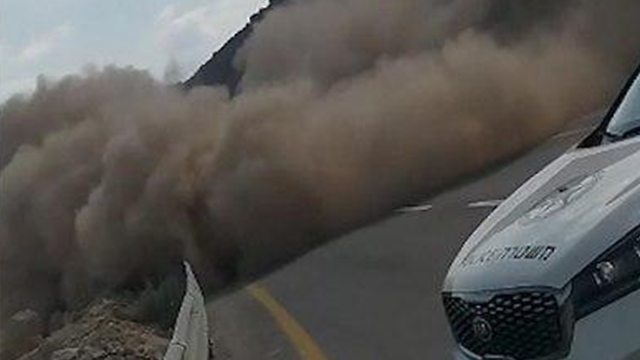 The road was blocked and the cliff collapsed: Police blocked traffic on Route 31 from Zohar Junction to Houthor Junction at noon following a collapse of part of the cliff on the road. The road is blocked to traffic in both directions. Dramatic documentation looks like a mobile is blocking the road – and then part of the mountain collapses.

The landslide record, when you were moving nearby 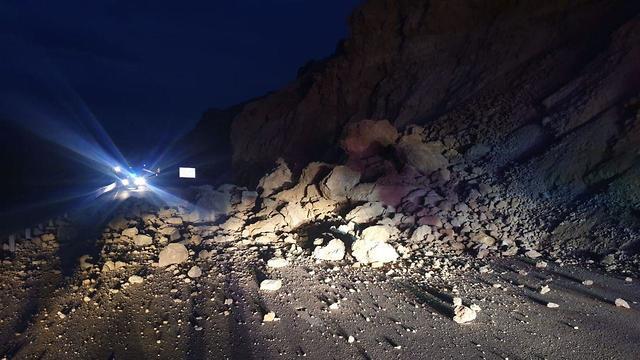 About two weeks ago, a similar case also happened. Even then, the road closure connecting Arad to the Dead Sea was closed due to the collapse of part of the mountain on the road at the end of the descent to the Dead Sea.

At least 30 people have been killed following more than two days of torrential rains in the southeast of the country. The severe weather comes one year after a dam break killed nearly 300 people. Two days of torrential downpours have unleashed heavy flooding and landslides in southeastern Brazil, killing at least 30 people, according to authorities.

Civil defense officials said another 17 individuals were listed as missing following the landslides and building collapses.

An additional 2,600 residents have been evacuated from their homes in the state of Minas Gerais, regions of which have been devastated by the heavy rains. The governor of Minas Gerais, Romeu Zema, will fly over the flooded area on Sunday to evaluate the damage. More rain is expected in the area, as well as in other parts of Brazil, including Rio de Janeiro and Sao Paolo.

The deadly floods came the same weekend that Brazilians were commemorating the deaths of 270 people killed one year ago when a dam burst in the municipality of Brumadinho, also in Minas Gerais. A major landslide has destroyed a highway on the southern entrance to the Azeri capital, Baku, following torrential rainfall. A stretch of road 100 meters long was damaged by the slide early morning on November 25, with one lane completely destroyed. The incident occurred just a short distance from the city's historic Bibi-Heybat mosque. 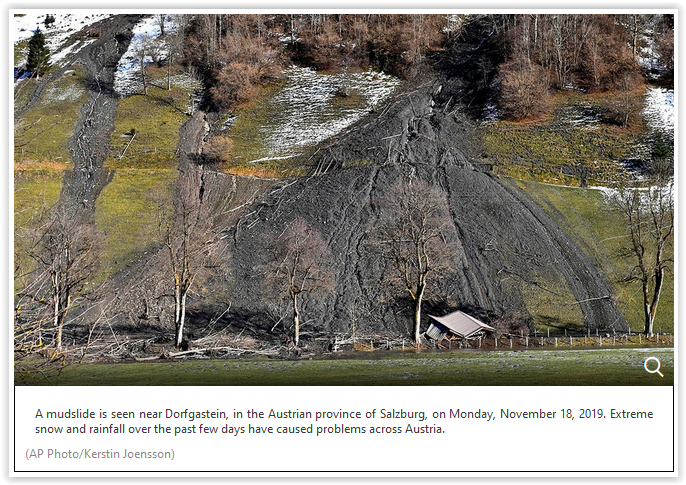 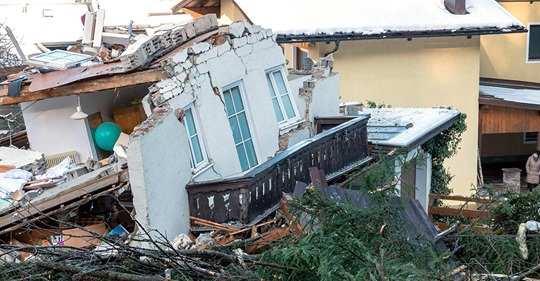 The weather system that has brought historic flooding to Venice is also causing snowstorms, flooding and mudslides across Austria.

Schools were closed Monday in East Tyrol because of the threat of avalanches, the APA news agency reported.

A mudslide killed an 80-year-old man when it hit his home Monday in Bad Kleinkirchheim in southern Austria, according to the Associated Press. The house was essentially destroyed, Mayor Matthias Krenn told APA.

Two women were buried in their homes by another mudslide in Bad Gastein, south of Salzburg. The mudslide pushed one house into the other, APA reported.

Both women survived, but it took firefighters several hours to rescue one of them, AP said. Both were injured and taken to the hospital.

On Sunday, a mudslide hit a barn in Reisseck, injuring a 34-year-old woman and killing several cows, the Kleine Zeitung reported.

Flooding from the Gurk River forced residents to evacuate 15 buildings in Gurktal, in the Carinthia region, AP reported.

More than 30 people were evacuated from their homes in the Austrian state of Styria because of the threat of landslides, Deutsche Welle reported.

About 3,300 houses were without power on Monday in East Tyrol and Carinthia, Der Standard reported.

Several train lines were interrupted and roads were closed.

Villages in southern Austria were cut off because of heavy snowfall, AP reported. Helicopters scouted the nearby mountains for possible avalanches.

Heavy snow in South Tyrol in Italy led to an avalanche that grazed a populated area of the Martell Valley in the Alto Adige, without causing major damage, AFP reported.

Emergency services are in Mansfield, UK.

The aftermath of a mudslide in Mansfield

A mudslide in Mansfield has caused 35 homes to be evacuated by police.

Emergency services rushed to the area just after 5pm following reports of safety concerns for residents.

The road has been closed between Berry Hill Road and Jenny Beckett's Lane and drivers are being told to avoid the area.

“Police and fire have been evacuating people from their houses, it’s a bit unstable especially with the rain forecast for tonight.

“I feel sorry for those who have come back from work and have no garden left and families have been moved out of their homes for the night.

“I was shocked, it’s not something you expect.”

Father and his three sons aged three, six and ten are killed when landslide swallows their house in Guatemala

A father and his three sons were killed today when a landslide swallowed their house in Guatemala.

Shocking footage shows houses being sucked into a huge hole as the ground gives way in the village of Xenaxicul near the border with Mexico at around 6.30am.

Francisco Mejia Lux, 39, was inside ones of the houses with his three children, aged three, six and ten. Their bodies were recovered from the rubble.

The three boys were named as Feliciano, Fredy Gaspar and Enzo Arael. 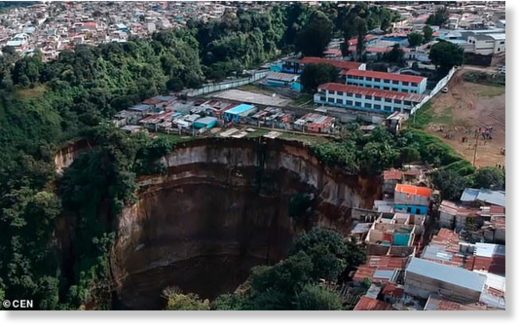 Their mother, Catarina Tum Luc, 36, was also outside grinding corn for breakfast when landslide hit and is said to be in deep shock.

A 16-year-old boy who was using the outhouse at the time was rescued by the emergency services, but his current condition is unknown. 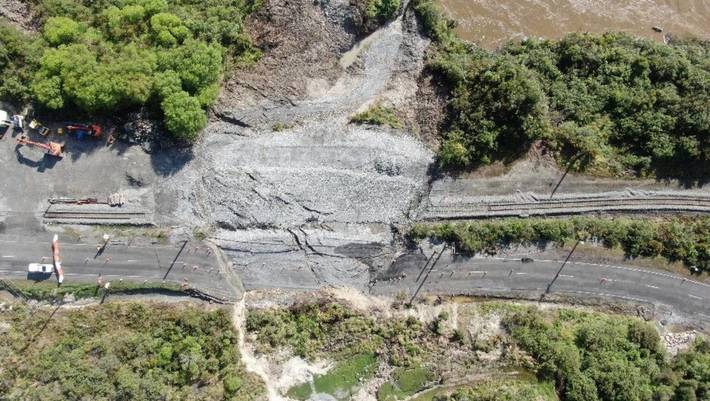 A massive landslide has closed a highway near Greymouth on the West Coast, days after it reopened.

A historically active slip between Greymouth and Stillwater at Omoto, which moved after weeks of wet weather in mid-August, moved another 30 centimetres early in October.

As a result, the section of SH7, the main road linking Reefton and Greymouth, was closed. It reopened to a single lane on Tuesday.

The highway was closed at 5pm on Friday and would be closed until at least Tuesday, New Zealand Transport Agency West Coast maintenance manager Moira Whinham said. 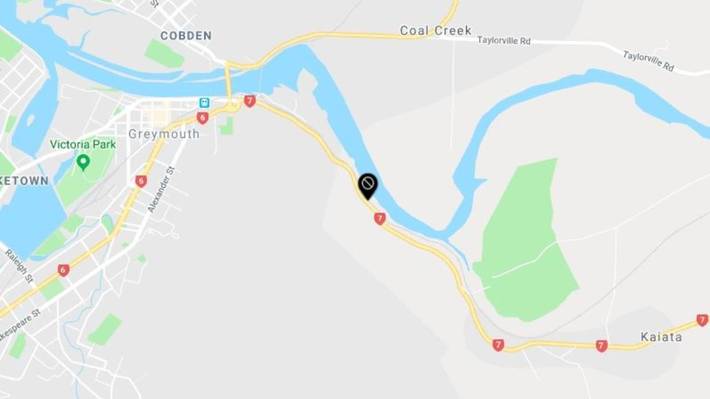 It would be re-assessed at 10am on Tuesday.

A short detour was in place across the Grey River, via Taylorville. The detour had turnoffs at Stillwater and Cobden bridges on the north side of the Grey River.

Continuous heavy rain and high river levels contributed to the slip. Rain on Friday and Saturday morning saw the slip accelerate and drop by more than 2 metres overnight.

Drivers were asked to take it slow, particularly through Taylorville.