Would the Zetas like to comment on 2 new similar Crop Circles? Are these designs legitimate?
[and from another]
Allan King Way, Nr Cheesefoot Head, Hampshire. Reported 29th June
http://cropcircleconnector.com/2020/allanking/allanking2020a.html
[and from another]
Smeathe's Plantation, Nr Ogbourne St George, Wiltshire. Reported 25th June.
http://cropcircleconnector.com/2020/Smeathe/Smeathe2020a.html 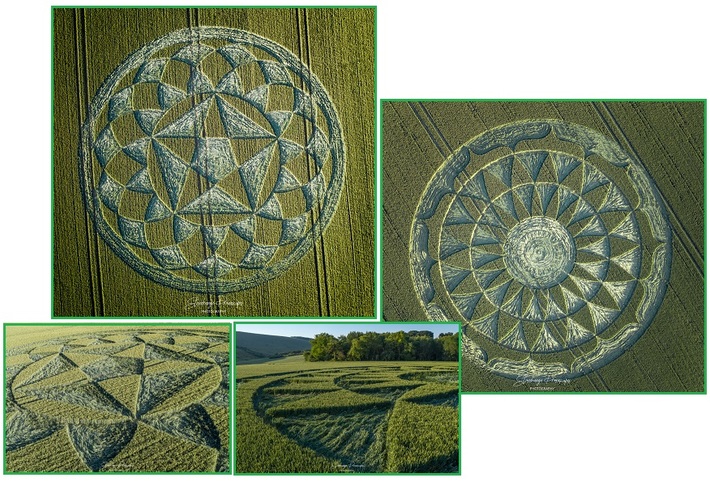 SOZT
The Stonehenge and Solstice designs were so compelling, and so well understood by those contactees who viewed them, that those in the establishment who would deny mankind knowledge of the alien presence and knowledge of Nibiru set out to turn heads. Both these designs are frauds. One clue is the utter regularity of the design. This, during a time when the Earth and her daily rhythms are anything BUT regular. The sunrise and sunset times are off. The compass is off. And the seasons have become jumbled.

A second clue that this is a hoax is that the center of the circle is basically on a tractor line, and thus the initial footprints can be hidden at the start. The third clue is that the grain is crushed rather than woven. For Cheesefoot, it is as though a man stepped into the center of a smash point, twirled around, and then swept the edges of the smash point with a broom. Not woven. For Smeathe the grain has been raked in one direction but is sticking up all over, not perfect.
EOZT 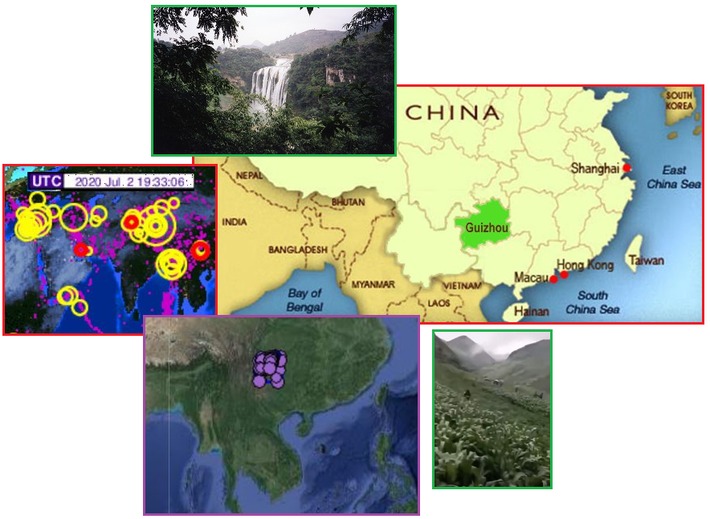 SOZT
When lakes began singing to mankind, vibrating due to tension in rock creating an alternating pull and relax, this at first sounded like music – the Trumpets of Kiev and the Horns of Belarus. Then other stretch zones added their sounds, but not all sounded like music. Tampa Bay was a howl. Saskatoon was a bellow. Variations where there is no water to vibrate include humming and booming, like drums. All these afflicted areas are in stretch zones, where rock is being pulled apart. But central China is not considered a stretch zone.

The great Eurasian Plate stretches from the UK to the coast of China, without a plate border, and thus China is indeed in a stretch zone. The stretch will become so intense that during the Pole Shift a new inland bay will be torn through Persia to the Ural Mountains. If Kiev and Belarus, and London and Munich can sing and howl, then so can China. Guizhou Province is indeed getting earthquakes, as is the whole swath of land above Tibet. Guizhou Province has rivers, but not large enough to sing. But when the mountains are pulled apart, they will indeed howl in pain.
EOZT

Prior 2010 ZT: http://www.zetatalk.com/info/tinfx306.htm
The highlands in the provinces, inland from the coast of southern China, will escape the punishing tidal waves that will assault Guangzi and Guangdong and Fujian provinces. As all dams will break during the magnitude 9 earthquakes that will rack the Earth, the 3 gorges dam on the Yangtze River will likewise fail, with disastrous flooding for any downstream. SOZT
During the 7 of 10 Plate Movements the S American Roll precedes the intense bowing tension in the N American Plate. We have stated that during the New Madrid adjustment, the eastern part of the US will shift to the northeast, while the lands to the west of the Mississippi will shift to the southwest. But prior to the New Madrid adjustment the bowing tension is driving the southern part of the N American Plate westward, with an unrelenting pressure. That portion of the plate to the East of the Caribbean Plate thus pushes against the Caribbean Plate, and the hammering quakes at Puerto Rico show this pressure.

The Caribbean Plate is already being pushed westward by the S American Roll, but will not move far enough or fast enough to resolve this conflict. This pressure on the southern part of the N American Plate is the main reason that the eastern part of the US shifts NORTHEAST during the New Madrid adjustment. Meanwhile, this pressure causes heaving in the southeast US, along the line where soft rock encounters hard rock in Tennessee and Mississippi. Heaving causes rivers to backflow, resulting in flooding up river.
EOZT

I am wondering if the recent spat of explosions in Iran is part of sabotage or Deep State cleanup like the public thinks or if it is related to the recent uptick in quake activity on the Arabian plate?

I am wondering if the recent spat of explosions in Iran is part of sabotage or Deep State cleanup like the public thinks or if it is related to the recent uptick in quake activity on the Arabian plate?

[and from another]
Third 'Mystery' Blast in Less Than a Week Rocks Iran Power Plant
July 5, 2020
https://www.zerohedge.com/geopolitical/third-mystery-blast-less-wee...
An explosion ripped through a power plant in the Iranian city of Ahvaz, marking the third 'mystery' blast to hit the country in only under a week, and the fourth recently. Starting over a week ago a massive explosion was observed lighting up the midnight sky outside Tehran, caught on film by local residents, which Iran's military dismissed as a gas leak explosion incident. But it was later revealed to have occurred at a ballistic missile development facility. Another reported "accident" occurred at Natanz nuclear complex. Crucially, Iran said there were no radioactive leaks as a result of the incident. Both US and Israeli media, including The New York Times and Times of Israel, have begun speculating that it could be part of a Mossad or CIA op to set back Iran's nuclear development.
[and from another]
https://www.timesofisrael.com/explosion-reportedly-damages-power-pl...
An explosion reportedly damaged a power plant in the Iranian city of Ahvaz. The blaze was ignited when a transformer exploded. Last week a large blast was felt in Tehran, apparently caused by an explosion at the Parchin military complex, which defense analysts believe holds an underground tunnel system and missile production facilities.
[and from another]
Gas explosion at Iran medical clinic kills 19
July 1, 2020
https://www.theguardian.com/world/2020/jul/01/tehran-gas-explosion-...
Gas leak at Sina At’har clinic in northern Tehran kills 15 women and four men, say fire officials. SOZT
Iran is certainly in an earthquake zone, as is Turkey. But why would it be only Iran that has suffered exploding buildings this past week? All three Iranian sites – Tehran, Natanz, and Ahvaz – are within the mountain building region of western Iran where Iran rumples when the African Roll turns the top of the Arabian Plate toward the East. Turkey is not affected by this crunch. We have described the holocaust that will occur when the tip of the Arabian Plate cuts through Iraq.
http://www.zetatalk.com/info/tinfx335.htm
Of course the earthquake peppered mountains of Iran would also be expected to suffer from this crunch.

Are there opportunists among the Mossad and CIA taking advantage of the turmoil that accompanies increased earthquakes? It is well known that Iran hides its nuclear development activities behind civilian cover, and notably the explosions that occurred this past week carry that signature. The Tehran clinic exploded due to a missile complex attack nearby. The power plant in Ahvaz is now disabled, and Natanz was a nuclear complex. The African Roll has barely started, but we estimate that before it completes Iran will no longer pose a threat.
EOZT

Prior 2010 ZT: http://www.zetatalk.com/info/tinfx335.htm
We have described the churning that will afflict Iraq as a turning of the Arabian Plate, the boot. As the African Plate rolls, and drops its rounded top toward the Indian Ocean, the Red Sea pulls apart, the Afar Triangle in Africa pulls apart, and the boot rolls. This turns the pointed top of the Arabian Plate so it pushes through Iraq, which is what is building the mountains that separate Iraq and Iran. This takes Jordan and Syria for a ride, as they are in the rear seat and not where compression is occurring. But all of Iraq is crushed into the mountains along its border with Iran. This will explode the oil fields in northern Iraq, heave and split the ground, and make survival in this portion of Iraq very risky.