A.  The Establishment deliberately covered up the presence of Planet X since at least 1983.

B.  Beginning in 1995, ZetaTalk has revealed to the public the truth about Planet X and the pending pole shift.

The decision you need to make:  Are you going to accept what the Establishment claims about Planet X, earth changes, signs in the sky, and what you should do (or not do) or are you going to listen to the primary source for the truth about Planet X and the pending pole shift, ZetaTalk.com?

The choice is yours; this is your free will decision.

1.  Information received from advanced, fourth density service to other ETs, who reveal the truth within Rules they must abide by; ZetaTalk is not channeled.

2.  Only ZetaTalk has a prediction and accuracy track record bar none.

3.  Only Nancy Lieder was singled out by NASA for special criticism.

4.  Only ZetaTalk predicted NASA would announce the presence of Planet X; no one else made this specific prediction prior to the Zetas.

5.  Only Nancy Lieder is the "founder" of the modern day Planet X theory (no longer a theory).

6.  Only the Zetas accurately described the location of Planet X so the Establishment could find it.

7.  Only ZetaTalk correctly stated when Planet X would arrive in the inner solar system (2003).

8.  Only ZetaTalk has been accurately explaining earth changes and signs in the sky while the Establishment has been silent or put out lies, disinformation, and misinformation.

9.  Only ZetaTalk presented science that human scientists later discovered or confirmed (Big Foot, faster than the speed of light, etc.)

10.  Only ZetaTalk -- among many other things and starting way back in 1995 -- correctly predicted and described the earth wobble, extreme weather, drought and deluge, collapsing buildings and bridges, exploding gas lines and breaking water mains, exponential increase in earthquakes and volcanic eruptions, and the sun, moon, and the stars frequently out of position.

1.  Information received via telepathic communication with ETs via one, and only one, human Emissary:  Nancy Lieder. 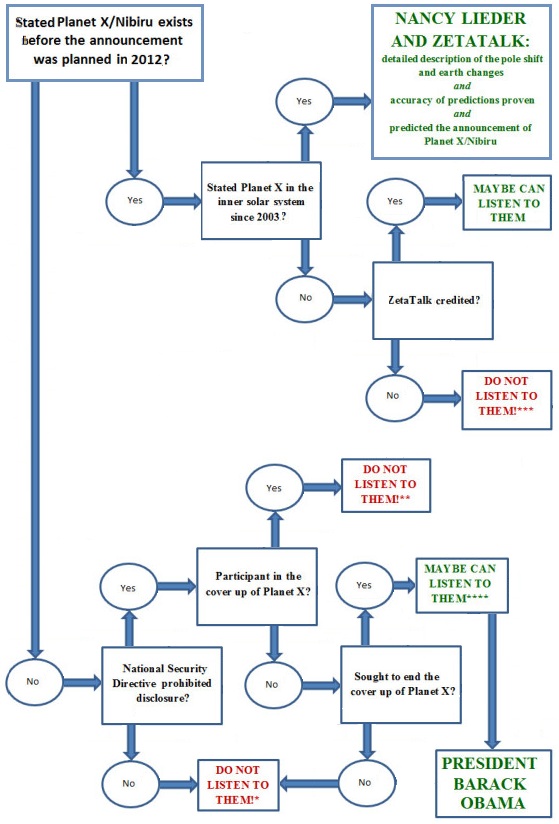 March 15, 2015 Post Script: Project Camelot is now trying to grab the stage, showing their colors, with a mixture of fact and fiction on this slide-show:

The "expert" is on target with history until he gets to WHEN it will be visible (Dec 2015, but it has been visible since 2002-2003) and who to follow for info (all the wrong disinfo people). Check out Bob Fletcher Investigation site and youtube “Astrophysicist Jim McCanney 19 Feb 2013” and “2013-02-20 Ever Beyond Special with AlexCollier” for background details.

This is an attempt to grab the stage, by the establishment. Look at this guys credentials. He is establishment, the worst kind - bankers, UK (at the heart of the coverup), organized religion. Yuck. This is an interview with Kameran Fally, banker, physicist, religious scholar and political advisor to top levels of the British and Iraqi governments.