This is much worse than I could even imagine... Can the Zetas comment on this? I am amazed at how globally all this is coordinated, it seems that the elites of the countries of the USA, Russia, China, are all for one. We are already in world government. [and from another] Putin Approved the Development of the State Program for the Implantation of Microchips into the Brain June 22, 2021 https://www-svoboda-org.translate.goog/a/putin-odobril-razvitie-gos... The Ministry of Education and Science told Kommersant that the project was at the initial stage of development. And after the publication of the material - that the project was canceled at the end of 2020. In April 2021, Elon Musk's startup Neuralink demonstrated its technology in this area. [and from another] Moscow's QR Code Passes Get the Tattoo Treatment July 14, 2021 https://www.themoscowtimes.com/2021/07/14/moscows-qr-code-passes-ge... A new project by the Delivery Club food delivery app and the Everink Tattoo online shop is giving Muscovites the chance to wear their QR codes proving their coronavirus vaccination or immunity as a temporary tattoo. The temporary QR code tattoos last for about two weeks after application. [and from another] State Duma Deputy Delyagin Demanded that Gunzburg Disclose the Entire List of Unspecified Components of Sputnik-V October 26, 2021 https://taen--1-livejournal-com.translate.goog/1921920.html The head of the Gamaleya Center, Alexander Gintsburg, said that Sputnik-V contains a certain "marker" component that is not excreted from the body for a long time. And thanks to this "marker" it is possible to establish with good certainty whether a person was actually vaccinated or issued a certificate for himself without going through the procedure. [and from another] Moscow Plans Expanded Social Credit-Style Tracking System - Open Media November 25, 2020 https://www.themoscowtimes.com/2020/11/25/moscow-plans-expanded-soc... Moscow plans to track its residents  loyalty with detailed digital profiles akin to China's social credit system. Moscow City Hall has since 2017 been collecting the gender, age, income level and relationship to other people signed up to its mos.ru website as part of the internet activity monitoring system called IS STATS.

The trend to tag people in some way so that they can be scanned and identified has been increasing as the End Times becomes obvious. Identity cards like a driver's license or Social Security number or Credit Card can be lost during a rush to safety during an earthquake or escape from a flood. Despite the lies in the Main-Stream Media about Covid passports, which as we have explained are a device of the elite to repress migration, stopping any Covid-19 infection is not the main concern of the elite.

The elite desire to sort out any desperate migrants into two basic camps -  those known to be law abiding and hard-working, and those with an unknown history or a criminal record or young males with an attitude. The two groups could be considered passive and cooperative or trouble-makers. The Social Credit System builds a history, so as long as the individual has ID they can be identified. Those who are passive or trouble-makers can thus be easily established. The vaccines have long been identified as tagging a person so that the fact of their being vaccinated can be established. Those vaccinated would of course be considered sheep - passive.

How will this play out as the Earth changes progress? The elite anticipate the status quo to continue -  the Police and Military to be steady and reliable and their enclaves protected. None of this will happen.

Tagging mankind has emerged but it is a new and undeveloped process. There is no time to establish universal or proven methods. Only a tiny percentage of the populace has been personally tagged in some way. Even the Social Credit System would falter if a personal ID was not on the person. Identity theft would be rampant. Distracted Police and Military would assign tasks to refugees and identify trouble-makers by their refusal to take assignments. Thus the concerns about the elite tagging plans are frankly irrelevant. 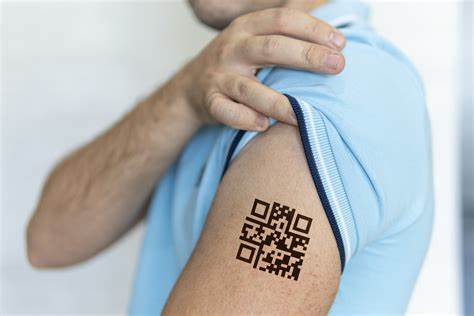