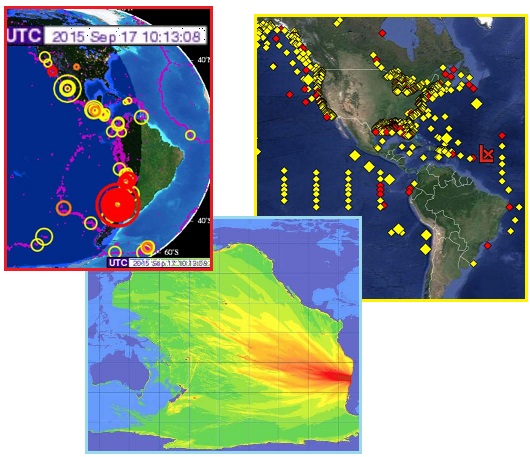 The 8.3-magnitude tremor was centred off the coast, about 144 miles (232km) north-west of the capital.

Five people are now known to have died, and one million residents have been evacuated from coastal areas. There were reports of panic in some cities.

The earthquake produced waves of up to 4.5m (15ft) along the coast in the region of Coquimbo.

Officials said it was at the depth of about 10km (six miles). 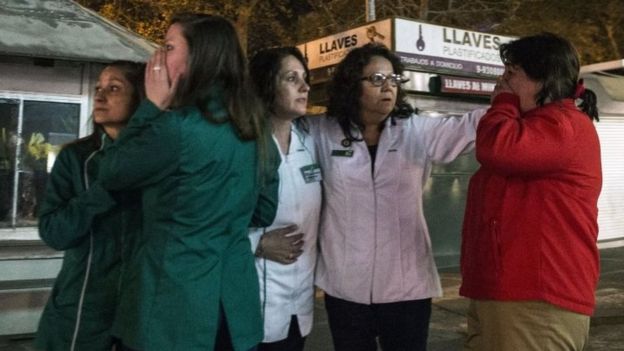 Some Santiago residents ran out of their buildings fearing new tremors 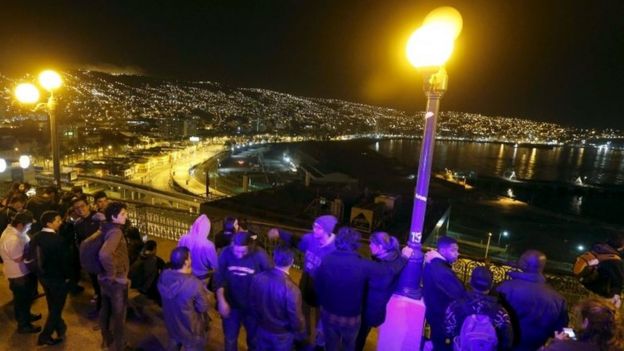 In Valparaiso, crowds gathered on high ground amid fears a tsunami may hit the port city 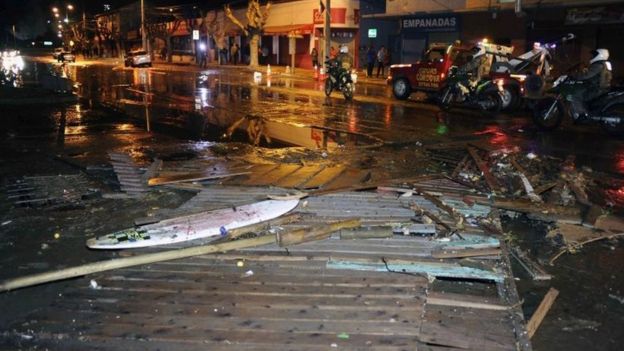 Some buildings were reportedly damaged, and debris was seen strewn on the streets

Addressing the nation live on TV, Chilean President Michelle Bachelet confirmed that two women were killed after rubble fell down on them and a man died of a heart attack.

Ms Bachelet said she would travel to the affected areas later on Thursday.

The authorities later raised the confirmed death toll to five, saying that one person was missing.

Some homes were reportedly damaged in the city of Illapel.

The earthquake struck as thousands of Chileans were travelling to the coast ahead of a week of celebrations of the national holidays, or Fiestas Patrias.

Tsunami alerts were also issued for Peru, Hawaii, parts of California and as far away as New Zealand. 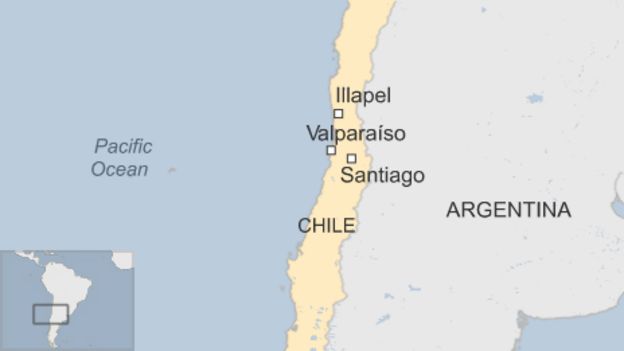 The quake was also strongly felt in some Argentine provinces like Mendoza and in the capital Buenos Aires several buildings were evacuated, the BBC's Ignacio de los Reyes reports.

Chile is one of the most seismically active locations on the globe.

It runs along the boundary between the Nazca and South American tectonic plates. These are vast slabs of the Earth's surface that grind past each other at a rate of up to 80mm per year.

The buoy was moved not by the waves, because in the sea the constant storm waves, hurricanes, typhoons, and so on. Then it would the buoy to constantly blinked. It reacts to the movement of the ocean bottom.

This site makes the point that plate movement happened on the Philippine Plate, the southern part of the Indo-Australian Plate, and just east of this plate in the Pacific near Fiji. This equates to the 7 of 10 plate movements in process. The buoys are not driven by wave action, but by the plate bumping. 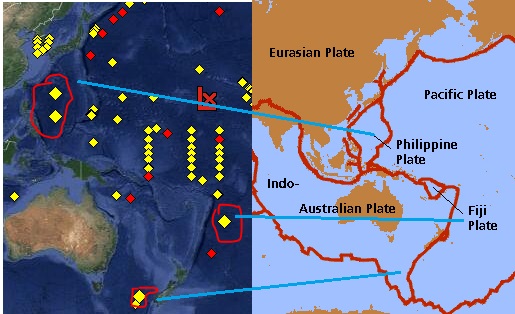 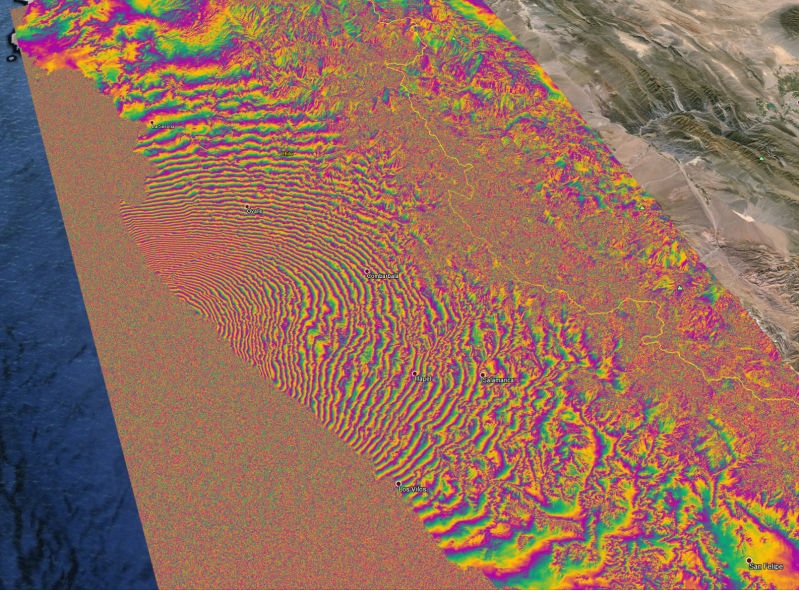 The very ground shifted when Chile was hit by a magnitude 8.3 earthquake this week. By comparing images before and after the earthquake with an interferogram, geophysicists can measure just how much and where the ground moved.

An interferogram is a geophysical tool for tracking changes in surface topography over time. It can be used to find landslides, or to spot when a magma chamber is filling and forcing a volcano to bulge out prior to an eruption. It can track subsidence when groundwater is being over-pumped or a river delta is sinking, or to watch the incredibly slow flow of glaciers. But possibly most dramatically, interferograms can be used to spot just how much an earthquake tore the ground in a burst of energy, shifting the very earth in a few seconds of severe shaking.

Interferograms are created by visualizing the interference pattern between two synthetic aperture radar (SAR) passes. When radar images of the same location at the same angle and distance are taken at different times, we create an image of the interference between the radio waves to very precisely measure changes in the intervening time. This particular interferogram was created using data from the ESA Sentinel 1 satellite taken on August 24 and September 17, 2015, capturing displacement from the earthquake on September 16th.

For this particular interferograms, each full colour cycle—a fringe—represents a displacement of approximately 2.7 centimeters. When the fringes are close together, that means the ground has moved a lot over a very small distance, an abrupt change between satellite passes in a steep deformation. When the fringes are farther apart, it’s a more gradual buckling. Closest to the epicenter of the Chile earthquake, the fringes are very tight together indicating greater abrupt displacement, growing broader farther away.

Interpreting these fringes as ground displacement requires one more step: incorporating the motion of the satellite. The satellite images are taken obliquely at an angle, not straight down. The InSARap Project team’s initial interpretation is that the earthquake caused between 0.5 horizontal displacement, and 1.4 meters line-of-sight of displacement. The lower estimate is from looking at the phase difference in burst overlaps (which indicates horizontal motion), while the higher estimate is from manually counting the fringes along the line-of-sight for the satellite’s path.

The actual colours are a bit more bizarre to conceptualize. SAR measures the phase of the wave, not an absolute distance, so the colours represent phases from 0 to 360 degrees. When the phase difference is 360 degrees, visualized as a full colour cycle, that means the ground changes are one full wavelength.

The areas of colourful static with no clear fringes are incoherent areas. Incoherence happens when a rugged surface like water, a landslide, plant cover cause a poor signal reflection and the waves interfere with themselves. The result is each pixel is assigned an effectively random number, different from adjacent pixels and looking more like a jumble of coloured sand than tidy bands. In this inSAR image capturing the Chile earthquake, the ocean is pure static, as is the thickly vegetated lowlands of the Andes Mountains.

Apocalyptic images showing the impact of the 8.3 magnitude earthquake that struck Chile and killed 12 are staggeringly similar to photos from the 2011 Great East Japan Earthquake, which killed almost 16,000.

The quake was felt as far away as Buenos Aires, Argentina. Authorities issued a tsunami alert for Chile’s entire Pacific coast.

A series of aftershocks, including one measuring 7.0 magnitude and three above 6, shook Chile following Wednesday’s quake, considered to be the world’s strongest so far this year and the biggest to hit the quake-prone nation since 2010.

While Wednesday’s tremor was powerful, the 2010 quake was 5.6 times stronger in terms of energy released, according to the US Geological Survey.

The homes of 610 people were reportedly damaged to the point where they were unable to return, according to government data. While 179 homes were destroyed, 87,600 remained without electricity and 9,000 without clean water, Reuters reported.

The government ordered evacuations from coastal areas after the quake hit for fear that any delay could trigger a repeat of a 8.8 magnitude quake disaster in 2010 which killed over 500 people and destroyed 220,000 homes. That fatal quake released so much energy that it shortened the Earth’s day by a fraction of a second by affecting the planet’s rotation. 18 SEPTEMBER 2015. Small waves have been recorded around the east coast of New Zealand following the massive earthquake off the Chile coast.

Chatham Islands was the area to receive the largest waves with heights reaching around 50cm while other gauges around the country measured less than 30cms.

A tsunami warning was issued after a 8.3-magnitude quake yesterday morning (NZT), off the coast of Chile, about 9700km across the Pacific Ocean. CONTINUE...

The anticipated tsunami reached across the Pacific by a couple days later. The buoys rocking right after the quake, in the Caribbean and in the North Atlantic, were from THOSE plates jerking. This was a real plate mover! 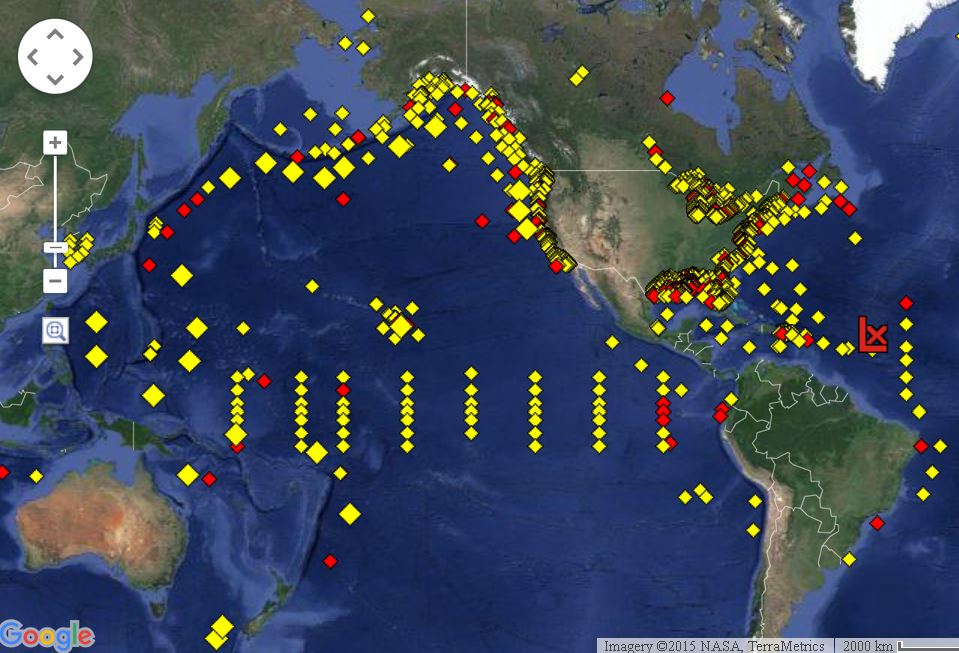 Are American Cities Prepared For Massive Tsunamis? RE: Chile Earthq...