The US Geological Survey said the quake struck near the Santa Cruz Islands in the Solomons, which have been hit by strong tremors over the past week, at a depth of 3.5 miles (5.8 kilometres).

"We know that a tsunami has been created," said Geoscience Australia seismologist David Jepsen. "It's a big earthquake anyway in terms of just the shaking."

Evacuations in the Suva district of Fiji

Two powerful aftershocks of 6.4 and 6.6 magnitude were also recorded.

Many villagers had headed to higher ground as a precaution, Mr Herming said.

Traffic backed-up in Fiji as residents fled to high ground

"Sadly, we believe some people have lost their lives," he said. "At the moment we potentially know of four, but there may of course be more."

Locals in the island's capital, Honiara, 580 kilometres (360 miles) from the epicentre, said the quake was not felt there, but three villages on the Santa Cruz islands were damaged, according to hospital director Augustine Bilve.

"We were told that after the shaking, waves came to the villages," he said. "So far, we are waiting in Lata and are evacuating patients in case there are any casualties."

In Honiara, the capital city of the islands, the warnings prompted residents to flee for higher ground, although most people remained calm.

"People are still standing on the hills outside of Honiara just looking out over the water, trying to observe if there is a wave coming in," Mr Herming said.

"People around the coast and in the capital are ringing in and trying to get information from us and the National Disaster Office and are slowly moving up to higher ground," said another official. "But panic? No, no, no, people are not panicking."

In 2007 a tsunami following an 8.1-magnitude earthquake killed at least 52 people in the Solomons and left thousands homeless.

The Solomon Islands are part of the "Ring of Fire", a zone of tectonic activity around the Pacific Ocean that is subject to earthquakes and volcanic eruptions.

OFFICE OF THE
PRIME MINISTER AND CABINET

The Government today has officially declared a State of Disaster for Santa Cruz Islands in Temotu Province following Wednesday’s deadly 8.0 magnitude quake and subsequent tsunami that claimed lives and property.

The Minister for Environment, Climate Change, Disaster Management and Meteorology, Hon Bradley Tovusia made the declaration following a decision reached by the National Disaster Council on February 7.

The National Disaster Council has satisfied itself that the logistical challenge inherent in responding to the disaster in Temotu means that support has delayed departing Honiara to reach the affected population.

This challenge coupled with the number of dead already reported, the huge disruption to normal functioning in the province and that the capacity at the local, provincial and national levels to deal with it alone has been exceeded there has led to the NDC recommending a declaration of disaster be made.

In light of the current situation, the Provincial Emergency Operations Center has been activated and there are currently 6 teams doing assessment in affected areas.

Based on Information received from the ground, the Government expects the province will require significant additional support.

The Government hopes the official disaster declaration will mobilize more support both inside and outside the country to facilitate relief efforts more swiftly. 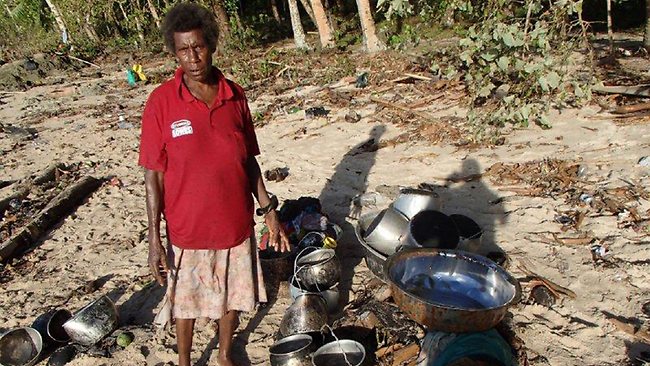 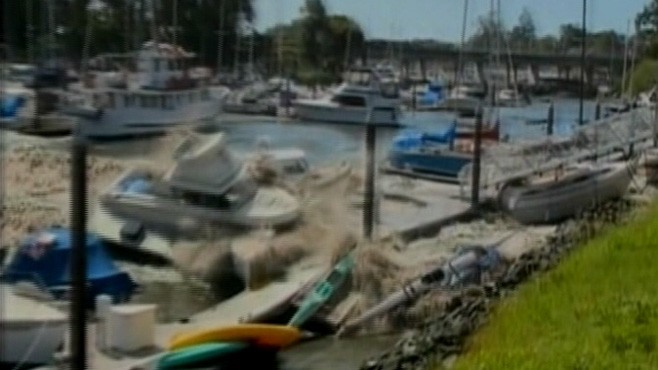 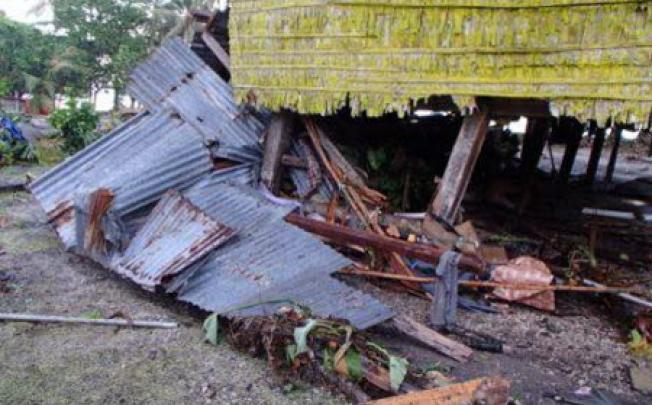 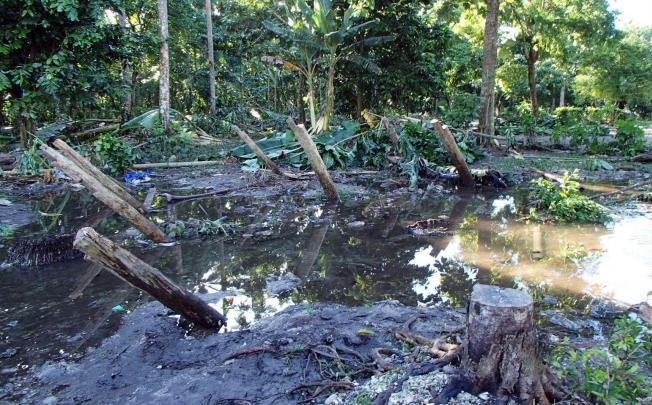 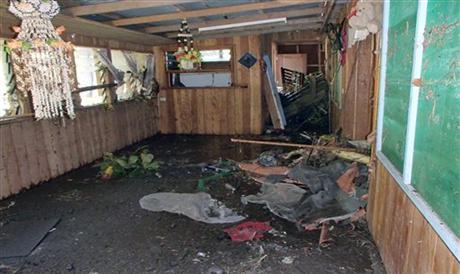 STRONG aftershocks have hampered efforts to send aid to tsunami-affected villages in the Solomon Islands, as the scale of the disaster widened significantly.

At least nine people were killed.

“At first we thought it was going to be quite small but now it looks like it's going to be very big and communities will not be able to handle it themselves,” national disaster management office spokesman Sipuru Rove said.

The remoteness of the disaster zone, more than 600km from the capital Honiara, has hamstrung relief efforts, with plans to fly in aid thwarted by damage to the islands' airstrip in the main town Lata.

Mr Rove says debris left on the runway after the quake have been cleared but the constant aftershocks rattling the island, including a 6.6-magnitude jolt early today, mean pilots are wary about landing there.

He says a flight carrying Prime Minister Gordon Lilo and senior officials to the island is believed to have turned back to Honiara early today because of fears the 6.6 quake had caused fresh damage to the airstrip.

In addition, Mr Rove says the aftershocks are frustrating attempts by villagers to salvage supplies from their devastated homes to equip the makeshift camps where they are sheltering in the rugged interior.

“They will go down (to the villages) but when there's another aftershock they run back to the hills because they're scared of another tsunami,” he said.

With the airfield still out of action, two boats set sail from Honiara late yesterday loaded with food, water and medical supplies. They are expected to arrive late today or early tomorrow.

World Vision, which had a 20-strong team working on development projects on the island before the tsunami, says food and water in the hillside camps is running low and sanitation will become an issue in coming days.

“Destruction has been widespread in and around Lata,” it said. “Coastal wells have been covered by debris or contaminated, water tanks and toilets have been destroyed and coastal areas are littered with dead fish and poultry.

“For many families, their livelihoods also disappeared in the water.”

Both Australia and New Zealand are ready to provide assistance to their northern neighbour and Rove says an Australian air force Hercules will set off from Honiara on Friday to make a reconnaissance flight over the island.

An 8.0 magnitude earthquake struck off the coast of the Santa Cruz Islands in the southeast Solomon Islands archipelago on 6 Feb 2013. Initial information suggests that a tsunami wave traveled 500 meters inland. 431 houses have been damaged or destroyed in Temotu Province, leaving 3,500 people displaced.

2) Solomon Islands: Earthquake and Tsunami Situation Report No. 2 (as ... [ReliefWeb]

* Initial reports indicate that 431 houses have been damaged or destroyed in Temotu Province, leaving 3,500 people displaced

* The water supply in Lata, the provincial capital of Temotu  Province has been damaged, affecting more than 2,300 people

The National Disaster Management Office reports that it does not yet have a clear picture of the damage caused by the earthquake and tsunami on 6 February, due to the high number of aftershocks and difficultly accessing remote areas of Temotu Province.

Initial reports indicate that 431 houses have been damaged or destroyed in Temotu Province, displacing up to 3,500 people. With a formal assessment yet to begin, this number is expected to rise. Six people have been reported dead and four people remain missing, including a child who was swept into the sea. It is expected that the number of confirmed fatalities will increase in the coming days.

The airport in Lata, the provincial capital of Temuto Province is still closed with debris on the runway that will require heavy machinery to move. The National Disaster Management Office has deployed a patrol boat to the area carrying relief supplies, along with assessment and medical personnel. Given the remote location of Temotu Province, it will take up to two days for the patrol boat to arrive.

Makira-Ulawa and Malaita Provinces were also affected, with high swells and unusual wave and current activity reported. At this stage, no damages or humanitarian needs have been identified in these two provinces.

In addition to damages caused in Solomon Islands, tsunami waves were reported in Vanuatu, New Caledonia and Japan. In Vanuatu, a small tsunami wave was reported to have caused minor damage to a house and church in the Maskelyne Islands, located off the southern tip of Vanuatu’s second largest island, Malekula.

Further information about this area, according to the Zetas (January 15, 2011)

The islands at the plate borders in this region do not do well during the plate adjustments to come. The primary devastation will come during the hour of the pole shift, but the devastation has started during the 7 of 10 adjustments. Samoa rides on the Pacific Plate, which is pushing under the eastern edge of the Indo-Australian Plate, and as this process continues and accelerates, approaching the pole shift, will virtually disappear. The Solomon Islands do not fare much better, for the same reasons. Tonga and New Caledonia ride high. The little Fiji Plate, as the recent sinking indicates, will be a loser, pushed down into the notch as the Pacific Plate presses ever westward.

This is an update of mag 5+ aftershocks since lonne's last post:

I have been reading Zetatalk archived material lately and just came across this which I felt was relevant:

In relation to 2004's Indonesian quake and tsunami, is the location of Tuesday's earthquake and tsunami in the Solomon Islands an important indication of expanding plate pressures? Studying the earth's plates http://www.iris.edu/seismon/html/plates.html it appears that due to the shape of the Australian plate and the mass of the Eurasian plate above it, the greater force on the Australian plate travels downward toward New Zealand as well as eastward. Comparing Google Earth with the above link, one can actually see the outline of the Australian plate. The plate comes to a hooked point around Fiji and Samoa which would appear to come under extreme pressure within the Zeta's descriptions of the forces at play. Are the Zeta's allowed to tell if the plate will fracture at this point, prior to the shift and if so, can a large tsunami be expected as a result? [and from another] 94 quakes of 5+ Richter in 48 hours, and continued for a couple days with dozens more. [and from another] People missing after tsunami [Apr 2] http://www.cnn.com/2007/ Several people were missing on Monday after a powerful earthquake in the South Pacific hit the Solomon Islands, triggering a small tsunami. A tsunami warning was also issued for other Pacific Rim countries, including Indonesia, Papua New Guinea and Australia, after the shallow quake, which had a magnitude of at least 8.0. It was just like a real extreme tide. The water just came up about about 12 to 15 feet above sea level. [and from another] Quake lifts Solomons island metres from the sea [Apr 7] The force of this week's Solomons earthquake has lifted an island in the South Pacific archipelago and pushed out its shoreline by tens of metres, exposing surrounding reefs.

This is a high profile region for quakes during the end times because the Indio/Australia plate is so resistant to movement and is blocking so much movement from the Pacific. Look to the Himalayas, the highest mountains in the world. What drove them so high? Prior pole shifts, which pushed land under these mountains. Where this happens elsewhere on Earth, it is not to the extent here, and thus the hammering that goes on along this plate boundary. When these breaks occur, and movement pushing under the Himalayas occurs, New Zealand lifting, India dropping, then suddenly other adjustments can occur in the Pacific, in the Antarctic plate, and movement all around the globe occurs. Once this plate loosens up sufficiently, and active subducting of India starts, then you will see real action. We have been indicating, on the reasons given for UFO sightings, that strong changes will be coming, soon, and long before the hour of the pole shift or such dramatic occurrences as 3 days of darkness. It is the fluidity of this plate to move that will allow such dramatic motion round the world.

Many aftershocks (note these are only the 5+'s)