Is the Porter Ranch gas leak natural gas, as they state, or methane? And will this blow and spew more radioactive elements? [and from another]http://www.latimes.com/local/lanow/la-me-ln-socal-gas-lawsuit-porte...  The well, one of 115 at the sprawling storage facility, has been leaking since Oct. 23, sending methane into the atmosphere above the Los Angeles Basin. The gas has a noxious additive that has also entered the air, prompting residents' complaints of a rotten egg-like smell. The company has tried several times to plug the well, but those efforts were unsuccessful. Since early December, the utility has been drilling a relief well to intercept gas from the damaged one and seal it. [and from another] http://www.zerohedge.com/news/2016-02-05/fukushima-class-disaster-l...  In a breaking development that has been completely ignored by mainstream news sources, the leaking natural gas well near Los Angeles, California is now reportedly spewing lethal levels of radioactive material. This rogue well is spewing huge amounts of natural gas and about 1.91 curies an hour of natural radioactive material in the natural gas. [and from another]http://la.curbed.com/archives/2016/01/porter_ranch_gas_leak_plug_we...  So there is an enormous gas leak at the Southern California Gas Company's Aliso Canyon storage site near the San Fernando Valley community of Porter Ranch that has gone unplugged for nearly three months now. In the first month alone, it accounted for a quarter of all of California's methane emissions. Every attempt to fix the problem so far has caused more problems. And apparently it can still get way, way worse. There could be a blowout. The safety valve on the well has been missing since 1979 and SoCal Gas knew the entire site was at risk from age and corrosion. [and from another] http://www.wnd.com/2016/02/lethal-levels-radioactive-fears-at-l-a-g...  Methane makes up the largest component of natural gas, which is both invisible and odorless. alarmists have claimed the leak is far more serious than health officials are letting on, citing the radioactive material such as uranium and radon in the natural gas. Ongoing efforts to plug the well have been unsuccessful. Southern California Gas crews are in the process of drilling a relief well to seal off the damaged one. Work is expected to be completed by late February. In January, the gas company abandoned a plan to capture and burn the leaking methane after regulators raised concerns about safety and explosion risk. 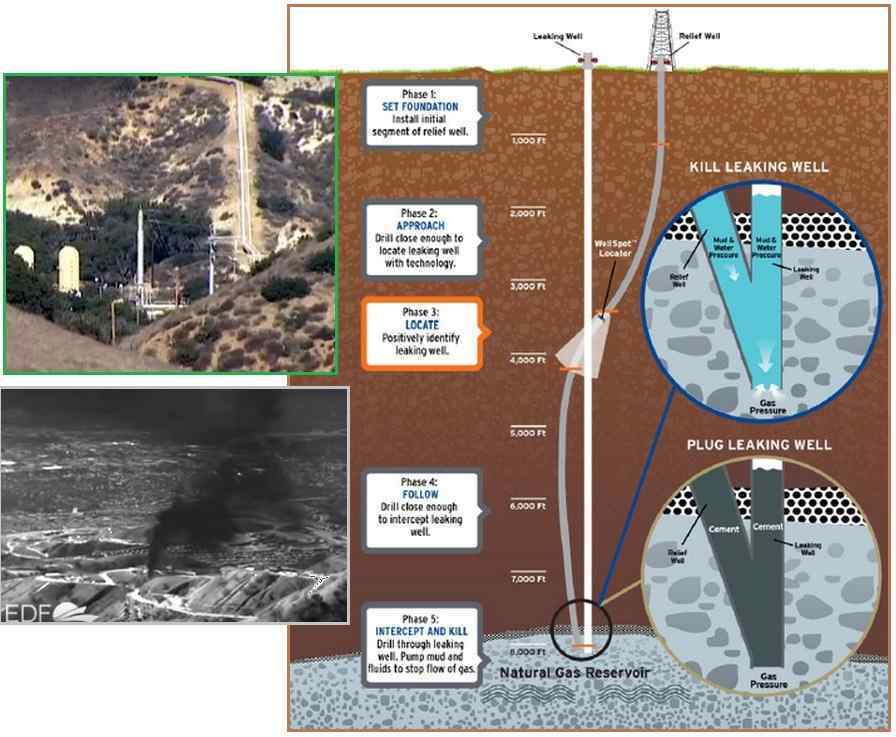 We have described the destruction that awaits Iraq at some point during the 8 of 10 phase, wherein the pointed tip of the Arabian Plate turns during the African Roll, ripping open the oil and gas fields there, creating a holocaust. This is of course not the only part of the globe to foster such a holocaust.  California is in the center of the bow that the N American continent is being forced to assume, prior to the rip along the great New Madrid Fault Line in the center of the continent. We have described this center as being at San Diego, but Los Angeles is just nearby.

During prior Pole Shifts, the compressing Pacific forced California to push up while rock layers subducted beneath the coastal mountains. This trapped vegetation, included kelp and seaweed from the Pacific Ocean, which when rotting became vast pools of methane and natural gas. The natural beauty of the Los Angeles basin and beaches and the temperate climate have allowed Los Angeles to attract a huge population, now put at risk. Will the increasing tension of the N American bow and the near proximity of the San Andreas Fault Line incite a blowout?

When earthquakes strike a large city, there are invariably fires, especially in a city serviced by natural gas. Electrical wires, snapped during the quake, can start fires but when all is in motion, sparks are everywhere. It is inevitable that a vented pool of methane and gas will spew, during the pressure of the moving San Andreas, and even if capped, this will be forced open by the pressure of the plate movement. Fortunately for the residents of Porter Ranch, they will have moved out of the area by this time, to escape the smell!