What is this? What do zetas say? [and from another] http://www.dailymail.co.uk/news/article-3452202/Mysterious-tar-like... The black, oily substance first appeared on at least six driveways in Harrison Township, what the material is still remains a mystery. Residents originally believed that the substance could have come from the nearby Selfridge Air National Guard Base, but the base released a statement saying it was not coming from their location. It does not appear to be a fuel substance at all and so we did confirm that but it appears as though it came from an aircraft but we haven't confirmed that. 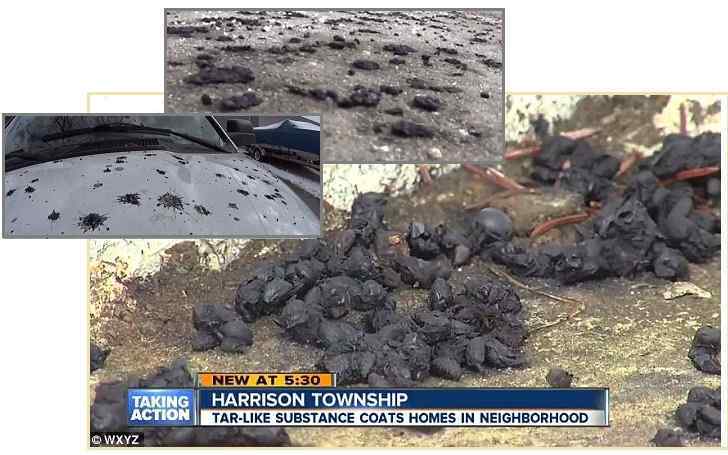 This tar-like substance is akin to ash, from petro elements in the tail of Planet X, aka Nibiru, burning in the atmosphere above Harrison Township (near Detroit). It is not flammable anymore, as it is, like ash, those portions of the burn that are not combustible. The establishment will come up with some plausible excuse, as usual, but that this scenario has never happened before, in human memory, is a clue that their excuses will fail, at least in the minds of the public. Nibiru has drawn closer, as the many naked eye sightings and Second Sun sightings confirm. The tail is pointed toward the Earth during this approach, and thus the greasy elements in the tail wafting Earth are more dense.

In parts of the world where rock stress and methane release are intense, as is occurring along the Seaway which is tearing apart, there will be the foundation of sky fires. Beyond the incidence of Light Towers which have been in evidence since 2008, methane alit, there will be blanket fires, where the methane and greasy elements in the tail are afire laterally in the skies. The end result of this is of course ash, puzzling those below who missed the blanket fire, which would only be visible during the night. These incidents will be on the increase.