February 23, 2011. http://www.theblaze.com/stories/ahmadinejad-predicts-mideast-unrest-coming-to-america/ Iran's president said Wednesday he is certain the wave of unrest in the Middle East will spread to Europe and North America, bringing an end to governments he accused of oppressing and humiliating people. "The world is on the verge of big developments. Changes will be forthcoming and will engulf the whole world from Asia to Africa and from Europe to North America," Ahmadinejad told a news conference. Ahmadinejad said the world was in need of a just system of rule that "puts an end to oppression, occupation and humiliation of people." [and from another] This correlates with what the Zetas said about the 8 of 10, "These sociological and political dramas are part of the 8 of 10 scenarios, as well as geological and astronomical features. This is the next chapter." http://poleshift.ning.com/profiles/blogs/zetatalk-fame The Zetas did say that Ahmadinejad is STO . Did he got his information from reading ZT or is there more too it?

Here's a group in Asia demonstrating government corruption in Singapore... 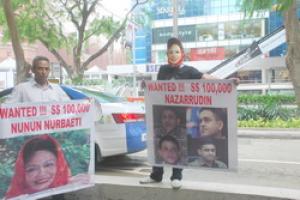 As reported previously, cases of corruption that drags the former General Treasurer of the Democratic Party, Muhammad Nazaruddin, was made public exasperation.  A number of activists calling itself Gonas (National Opposition Movement) was staged in Singapore.  Their action was immortalized by the Jakarta Post reporter who happened to be on duty in Singapore to follow the presence of former General Bendarahara PD's.
However, the Singapore government opposed their actions.  Five members were detained and their passports taken.  Upon arrest, re-staged Gonas.  But this time it was held in front of Singapore Embassy in Jakarta.
Demo held for less than two hours of the impasse, because the activists denied entry and could not meet with representatives of embassies in Singapore.  "Although rejected today, we still force them to hear our voices, Monday we will come again, with larger masses, we are still fighting for the fate of our members are detained, and forced the corrupt home, if the Commission was not able to," said Effendi.
In this action, in addition to berorasi, they also carried banners contain "Yudhoyono and Singapore.Same with Kolaburator Corruptors "and" Heaven For Corruptors of Singapore ".
The Singapore government ultimately chose the fifth release demonstrators.
"If there is no warning from the government (Indonesia).  We will continue the search Nazaruddin, "explained Judge Sarman, Gonas coordinator.Sarman Judge, claim to get information about that existence Nazarrudin who currently resides in Srengul India.viv
--- The opposition National Movement (GONAS) is a movement that was founded based on the awareness of the sons and daughters of the Nation who have concern for the Nation and the State of Indonesia.

Objective of establishing the National Opposition Movement (GONAS) is as a counterweight movement or the movement of people in control, criticizing the Government and provide solutions to whoever is in power.

The opposition National Movement (GONAS) stand Independent, No Political Party or interference of any political interest.  National Opposition Movement founded upon the Name of the People and Bring Amanah Rakyat Indonesia.

INDONESIA IS THE STATE UNITY. INDONESIA located at the equator THAT HAVE thousands THOUSAND ISLAND, INTEREST AND CULTURE NATION, AS WELL AS ANY NATURAL PROPERTY CONTAINED.  THIS PROPERTY IS NOT OWNED BY THE PEOPLE, NATION AND STATE INDONESIA IS MANDATORY FOR ALL fight for the nationalization ASSETS SUCH PROPERTY.

INDONESIA SHOULD BE A Superpower, BUT NOW WE BECOME SLAVES AND FOREIGN CAPITAL imperialists.

Injustice OCCURRED IN MANAGING Nega RA AND ANY RESOURCES, KAR E NA WE DO NOT SELF RELIANCE AND ALWAYS TO THE FOREIGN IN MANAGING ALL THAT, PUNITIVE BE POOR.

VISION:
1 . MOVEMENT AND THIS IS INDEPENDENT opposition / REAL AS PERMANENT unauthenticated POWERS TO REDUCE THE CURRENT OR THAT WILL COME AND NON-PARTIES.
2 . MOVEMENT IS COMING TO COMMUNICATE / aspiration ASPIRATIONS OF THE FORM criticism, ADVICE, AND SOLUTIONS AS A CHECK AND BALANCE POLICY - POLICY GOVERNMENT AND POLITICAL PARTIES IN THE FIELD OF ECONOMIC, SOCIAL, CULTURAL, POLITICAL AND SECURITY IN AND abroad.

Thousands of young people took to the streets of Spain's capital Madrid again on Sunday.

Obama is a star child and his soul is defiantly “awake “. He is an active participant in the transformation.

It has already been stated several times in Zeta Talk that Ahmakinejad is service to other and works to that end within the confines of his situation. So stating he is a hypocrite “Kettle is calling the Pot black” is contrary to what the Zetas have said.

Ahmakinejad’s orientation and therefore his motivations, which are for the greater good, are not debatable. And this blog is not about him personally or about politics it’s about his predictions regarding the transformation, where the service to self are removed from power and the status quo that they have created to protect their selfish interests is destroyed.

If Ahmadinejad is so STO, why is Iran in the throes of such massive civil unrest, with the rallying cry on the streets "death to the dictator"? If he won the election fair and square, why did the clerics see fit to commit voter fraud, unless they were simply fearful STS hiding behind this puppet of theirs?

As with the case of Obama, who is supposed to accomplish miracles, pass laws bypassing Congress, and dictating to the Judicial system what judgements they make in the process if necessary, this is narrow and childish thinking. Obama can only execute what laws the congress enacts, and cannot dictate. Iran's president Ahmadinejad likewise is limited in what he can do. Both leaders attempt to work within the restrictions, to accomplish as much good as is possible, given the situation.

Can you tell us if the Iranian election protest is provoked by the US intelligence, Israeli Zionist, etc? What will be the outcome of all this? What is Ahmadinejad's spritual orientation? I feel he makes a great Iranian president, He's no puppet!

We have already spoken to the issue of the president's orientation, that being Service-to-Other. For those who find this hard to believe, one must be mature enough to be able to envision what it takes to co-exist with religious leaders in a hard line country. The same is true of Obama, who inherited a mess and cannot work miracles on his own. The CIA is always scurrying about, trying to effect a revolution, but unlike in other countries in the past they have not been successful, but have rather been routed out of Iran. Of course those in charge are exagerating the success of the current president in defeating his challenger, so the announced percentages are exagerated. Nevertheless, the president won, with a substantial percentage.

Comment by MegaMontana on June 18, 2011 at 7:52pm
The starchildren who incite these revolutions should also be thanked. Without their absolute sacrifice, none of this would have started. Many have already died, and many will follow suit, especially in Libya. They return home upon their deaths but that doesn't make it any less painful. As they incarnate into empty bodies or make contracts with those who wish to leave their incarnations early, they consciously forget where they come from, but their resolve is strong and they know what they must do.

Comment by Gerard Zwaan on June 18, 2011 at 5:28pm
Jullie, i would think it also will affect Australia