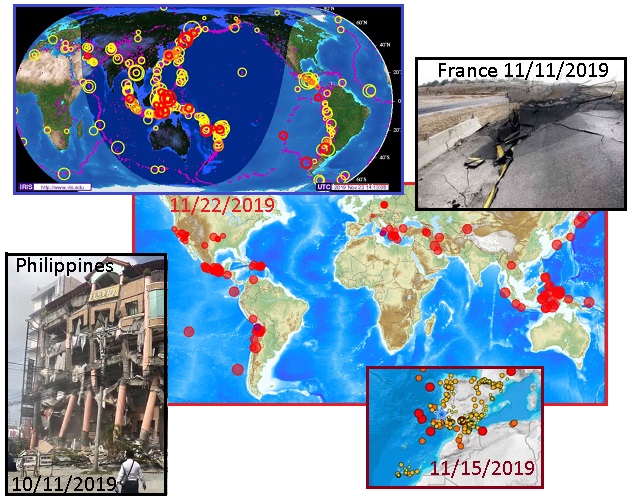 SOZT
The New Madrid adjustment is the last major plate movement to occur within the 7 of 10 predictions,
http://www.zetatalk.com/newsletr/issue621.htm
triggering the European tsunami [10] which completes the 7 of 10. We last gave completion percentages in March, 2015.
http://www.zetatalk.com/ning/07mr2015.htm
We would place the Sunda Plate [2] sinking at 98%, with the tilting of the Philippine Plate [3] at 84%. These will complete quickly as the Indo-Australian Plate [1] continues to tilt and rise, allowing the Pacific to compress. The S American roll [4] is aggressive, now at 78%, with quakes up and down the Andes and the press of the Caribbean Plate to the west obvious on quake maps.

The New Madrid [9] adjustment will be triggered by the push against the tip of Mexico, since Fukushima negated the need for Japan [8] involvement. Prior to the event we have termed the big New Madrid rip, where the fault line unzips toward the Great Lakes and under the Seaway, there will be increasing disasters throughout N America. It will be obvious to US authorities, and to the public, what is pending. At present, we would put the New Madrid adjustment at 36% completed, and this is due to vast changes below ground such as heaving and tearing. The stage has been set.

The African roll [6] likewise has gotten serious, now at 32%, with the Mediterranean at Gibraltar [7] starting to tear. The African roll will progress as the S American roll completes, as this creates a yaw in the South Atlantic [5]. We are not allowed to give timelines, but all of these events could complete within months, given the strength of the Earth wobble lately. It is possible for the New Madrid to start to unzip in hard rock while the Africa Roll completes, causing the tip of the Saudi Plate to tear through the oil fields of Iraq – dual disasters at the same time.
EOZT

Prior ZT: http://www.zetatalk.com/ning/07mr2015.htm
The sinking of the Sunda Plate is now perhaps 93% complete (up from 70% two years ago), with regions inundated by sea water still excused as broken dykes or levees or excessive rain. The Pacific Plate has steadily compressed, with major quakes in Japan evident and the S American roll progressing to an estimated 27% at the current time (up from 13% two years ago). The African roll has barely started, now at an estimated 12% (up from 5% two years ago). At present, the New Madrid adjustment is perhaps at only 2%, but as the 7 of 10 movements will accelerate, this will now rapidly change.

Prior ZT: http://www.zetatalk.com/ning/31ag2018.htm
In 2015 we gave estimates of the progress, but there is little point in giving new percentages as they will be changing so rapidly.

What happened near China? That’s unfortunate incident or a provocation?
[and from another]
https://www.themoscowtimes.com/2019/11/22/russian-watchdog-detects-...
[and from another]
https://www.express.co.uk/news/world/1208218/South-China-Sea-news-w...
[and from another]
https://gizmodo.com/no-china-did-not-secretly-detonate-a-nuke-in-th...
[and from another]
Chinese Nuclear Submarine May Have Been Involved in Incident in South China Sea
October 16, 2019
https://www.forbes.com/sites/hisutton/2019/10/16/chinese-nuclear-su...
The incident reportedly occurred in September but has only recently come to light via social media. Nuclear-powered ballistic missile submarines can operate submerged for months at a time and stay hidden beneath the waves throughout their patrol. Surfacing next to another country's vessel is unusual and suggests that something has gone wrong.
[and from another]
There’s Been a “Mysterious Incident” in the South China Sea—No One Knows What Happened
https://www.brighteon.com/c2d679ca-26d3-47e2-9a98-5176e77057b1
November 25, 2019
Chinese Type-093 (Shang-class) nuclear attack submarine exploded underwater Wednesday afternoon in what appears to be an accident in the hotly disputed South China Sea, according to a Pentagon source speaking under promise of anonymity...“The White House is convinced this is an accident.”
[and from another]
Massive Underwater Explosion in South China Sea Caused by Mysterious Craft Captured on ISS Live Cam?
https://beforeitsnews.com/paranormal/2019/11/massive-underwater-exp...
According to HalTurnerRadioShow the oceanographic instruments that monitor the South China Sea have recorded a significant underwater nuclear explosion. The explosion occurred on November 21st at around 18.22 ET and took place at a depth of about 50 meters and had to be between 10 and 20 Kiloton. After the explosion an increase of radiation was detected on the coast of China and Taiwan by the uRADMonitor. SOZT
We predicted that the 7 of 10 plate movements would include a tilting of the Philippine Plate such that it dips and pushes under the Philippine Islands on the western side. What would happen to a hapless nuclear sub located EXACTLY at the plate boundary there, if a plate adjustment occurred? Tumbling undersea rocks, sudden water pressure pushing the sub toward a disaster, and potentially a disabled sub. Such an accident happened in September, as radiation leaks hinted, but the damaged sub did not explode until November 21.
EOZT

New Madrid related?
[and from another]
Massive explosion at chemical plant in Port Neches, Texas lights up night sky
November 27, 2019
https://www.rt.com/usa/474426-chemical-plant-explosion-texas/
Damage to buildings in the vicinity is widespread as the explosion, reportedly at the TPC Group chemical plant, blew out windows and rocked homes up to 40 miles (64km) away. The explosion was even felt as far away as neighboring Louisiana.
[and from another]
Chemical plant explosion in East Texas blows windows from homes miles away
November 27, 2019
https://www.usatoday.com/story/news/nation/2019/11/27/port-neches-p...
A plant that produces chemical and petroleum-based products in East Texas has exploded, blowing out windows on homes several miles away.
[and from another]
Huge Explosion 'like a Bomb' at Petrochemical Plant rocks Houses 30 Miles Away
November 27, 2019
https://www.dailymail.co.uk/news/article-7730347/Fireball-erupts-Po...
The blast happened shortly after 1am local time at a plant belonging to TPC Group, and shook homes up to 30 miles away. People living in Bridge City and Port Arthur, around seven miles from the blast, reported feeling the explosion shake the foundations of their homes. 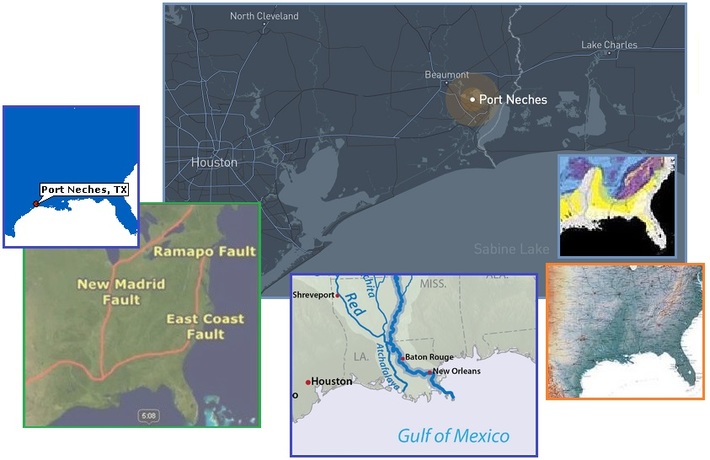 SOZT
The authorities at Port Neches are not even attempting to explain what caused the explosion on November 27, as the damage at ground zero is so extensive. This is related to the New Madrid Fault Line adjustment ongoing, which at the current time is pulling the soft sedimentary rock west of the Mississippi River down and to the southwest. Stretch zone adjustments seldom register as quakes, but cause land tilt, crevasses, zig-zag train tracks, separations in roadways or bridges, snapped water and gas mains, and collapsing buildings.

Often stretch zones will have sections that are cohesive, with borders between these sections taking the brunt of the stretch or tug, though the entire section may tilt. Port Neches is clearly a border between sections, and the jolt felt for miles was due more to the ground movement than the explosion. The stage has been set for a New Madrid unzipping along the fault line. Africa rolled on November 26, as was shown during the recent spate of strong quakes in Albania. This allowed S America to roll further, so the tip of Mexico was shoved and Port Neches dropped.
EOZT

Accepted from the Moderators Chat:

The Mossad is known for all kinds of mischief, just like the CIA. If Bibi was the PM in charge of IDF and Mossad for a decade, why is a prosecutor allowed to bring these charges forth? Was there a coup or purge inside the IDF?
[and from another]
https://en.wikipedia.org/wiki/Military_Intelligence_Directorate_(Is...
Military Intelligence Directorate (Aman): the supreme military-intelligence branch of the Israeli Defense Forces (IDF). Mossad: the agency responsible primarily for foreign-intelligence work.
[and from another]
The State of Israel v. Benjamin Netanyahu: The specifics of the PM’s indictment
November 28, 2019
https://www.timesofisrael.com/the-state-of-israel-v-benjamin-netany...
63-page charge sheet says premier was party to illicit deals and conflicts of interest, harmed public trust, and, in 3 cases against him, abused his office.

We have stated that the funds that Bibi relied
http://www.zetatalk.com/newsletr/issue685.htm
upon had dried up, due to the cleanup of money laundering networks and the debt slavery imposed by the western banks he controlled. Cooperation by the corrupt side of the Mossad thus weakened, as these individuals were primarily interested in personal gain, and they went to work for private parties. Thus scattered in many directions, without the skills and resources of the IDF, they are not as effective.

As is our usual practice, we are closing this November chat and opening the December chat. Please post your questions there. Thank you.