MAY BE ALSO AFRICA ROLL

[and from another]
After a week of clean-up efforts, tar still ‘everywhere’ on Israel’s beaches
27 February 2021
https://www.timesofisrael.com/after-a-week-of-clean-up-efforts-tar-...
From large patches clinging to algae to tiny droplets in the sand, the dark, sticky material is defying painstaking efforts to decontaminate almost the entire coastline
[and from another]
Israel investigates tar spill calamity, places inquiry under gag order
February 22, 2021
https://www.jpost.com/israel-news/israel-oil-spill-disaster-investi...
The ministry told Maariv, The Jerusalem Post’s sister publication, that the censorship order was made because “the investigation conducted by the National Marine Environment Protection Division and the Green Police has complex international aspects.”
[and from another]
Gantz says no evidence found so far that oil spill was deliberate
March 5, 2021
https://www.timesofisrael.com/gantz-says-no-evidence-found-so-far-t...
Defense Minister Benny Gantz on Friday said that there was currently no evidence to conclude that the oil spill off Israel’s coast that polluted most of the country’s beaches was a deliberate act of “environmental terrorism.”
“I can’t completely rule out that it was deliberate, but at this stage, we can’t determine that it was done on purpose.” 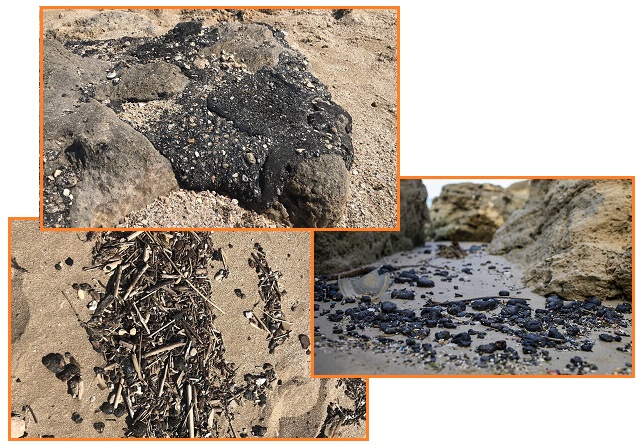 SOZT
What shipper caused the supposed oil spill that resulted in tar disbursed along Israeli beaches? After a month, no perpetrator has been found. The real perpetrator is Nibiru, causing the Africa Plate to roll. There is a rock spur between the coastline of Syria and Israel and the coastline of Turkey that prevents the top nob of the African Plate from dropping into the Indian Ocean. Thus at present the roll presses aggressively toward the East, and is now resulting in a squeezed Suez Canal.

As the great oil reserves in the Middle East attest, there are pools of oil underground in the region. As the African Plate grinds against the Arabian Plate, this oil is released. Over time, and under the cooling waters of the Mediterranean, this oil becomes tar. Oil spills do not usually announce themselves with pieces of hardened tar. They announce themselves with oil slicks. Why the cover-up over the perpetrator of the supposed oil spill? There isn’t one they can prosecute, and there is a cover-up over Nibiru.
EOZT

March 26th, 2021 Okay these were around 3:32pm and we see the 2 big orbs by the Sun and then here comes what I believe is Nibiru in red and using just the camera and no filter it pops right out at you. Looking towards the west the severe Earth wobble has placed it where it is. If the Zetas would like to comment that would be great.
[and from another]
Nancy’s Analysis: I have tried to establish the true size of this object by comparing to Alberto’s 8X zoom in 2018 (http://www.zetatalk.com/newsletr/issue599.htm) and a comparison to Venus size as viewed from Earth during a Transit. Nibiru is 5X the diameter of Earth, and Earth and Venus are the same size. A Google search seems to say that an 8X camera means the photos are 12.5% that size if the zoom is removed. Thus the object in Manuel’s photo appears equivalent to these sizes. Alberto’s 2018 closeup showed features on the face of Nibiru, albeit features in the heavy beige cloud cover that prevents the Annunaki from looking at the stars while home on their planet. These same features in the cloud cover appear in an August, 2020 Monster Persona capture by Julie
(http://zetatalk.com/newsletr/issue724.htm). Manuel’s photo is not a zoom so features cannot be determined, but a definite shadow appears on the shade side of the object. SOZT
During a severe lean to the West, as could be in process at this time of day in the US, Nibiru could be found at the 2 o’clock position. Normally heavily shrouded in Red Dust, and thus only discernable as a fuzzy object, Nibiru is coming out from the shadows in the view from Earth because the Red Dust is being encapsulated in Petrol Masses. Thus the Red Dust is momentarily swept aside for a direct view. Should this continue, the public will begin to notice!
EOZT

The SS Richard Montgomery is a WW2 ship which sank in shallow waters, right beside London, England, at the mouth of the Thames.   It is so heavily laden with explosives (1400 tonnes) that some say it would be the biggest non-nuclear explosion in history if it were to go off, and would cause catastrophic damage to London and its residents.   But there it sits, decade after decade.   Some call it a ticking time-bomb.  It could explode on its own and it also represents a grave terrorist threat because it could apparently be set off without too much effort.   And now we have the spectre of Earth Changes looming, including a tsunami which will hit England and "force up the Thames River to roil London's docks".   During this event, is the Montgomery in danger of being significantly disturbed, so that it may explode and add to the destruction?   Can anything be done about it?
[and from another]
https://en.wikipedia.org/wiki/SS_Richard_Montgomery
The ship was wrecked on the Nore sandbank in the Thames Estuary, near Sheerness, England in August 1944, while carrying a cargo of munitions. About 1,400 tonnes of explosives remaining on board present a hazard but the likelihood of explosion is remote. Because of the presence of the large quantity of unexploded ordnance, the ship is monitored by the Maritime and Coastguard Agency and is clearly marked on the relevant Admiralty Charts. The cargo was still deadly, and could be detonated by a collision, an attack, or even shifting of the cargo in the tide. The deterioration of the bombs is so severe that they could explode spontaneously.  If the wreck of Richard Montgomery exploded, it would throw a 1,000-foot-wide column of water and debris nearly 10,000 feet into the air and generate a wave 16 feet high. A knock, such as caused by the ship breaking up further, or a collision on the busy shipping lane, could cause the copper azide to explode and trigger an explosive chain reaction detonating the bulk of the munitions.
[and from another]
http://www.ssrichardmontgomery.com/
To remove the estimated 10,353 bombs still on board after the first clearance in 1944, 175 skips would be required, each carrying 20 tonnes of bombs! The National Grid LNG storage on the nearby isle of Grain, has the largest one million cu metre storage capacity of Liquid Natural Gas in Europe with the largest surface silos in the world, each bigger than the Albert Hall, that would be instantly demolished by the Montgomery blast and vaporize the gas to mix with four times its weight of oxygen in the air and produce an explosive blast equivalent of 160 Hiroshima bombs, without the radiation.
[and from another]
https://www.forbes.com/sites/davidhambling/2020/08/06/work-on-decay...
The concern is that corroding detonators can become unstable. Any shock, such as part of the wreck collapsing, could set off a chain reaction and ignite the entire load. The TNT is likely to be inert because the fuses have degraded over time. But even if the fuses no longer operate, the TNT itself is far from inert and will explode if detonated. SOZT
The SS Montgomery is certainly not going to die quietly. Even with deterioration in most of the fuses, once a single explosion has occurred others will follow, with all of the ordinance participating. As has been noted by experts, storage of Liquid Natural Gas nearby will likely join the explosion. The issue is not if, but when the Montgomery TNT will ignite. As has been noted by experts, a jolt will trigger a fuse. An earthquake or collision with another boat or a collision with floating material pushed by a tsunami would all be such a jolt.

We have predicted the pending European tsunami will enter the Thames and rush up to London with tidal bore. Tidal bore allows the rush of water to not only climb, it also causes an increase in speed. The water does not slow down when a pinch is encountered, it increases in speed and pressure. Thus all manner of trash will crash into the SS Montgomery, slung like underwater projectiles. We predicted that the 100 foot tsunami to assault the English Channel would be a scourge, devastating London. In the midst of this, exploding TNT from the SS Montgomery will hardly be noticed.
EOZT

Prior 2010 ZT: https://zetatalk.com/info/tinfx207.htm
In that the European tsunami is anticipated to be half the height of the pole shift tides, and washing through the English Channel at a height of 100 feet or more, what can be anticipated at this time for the lowlands of England and the eastern coastline along the channel. Rushing water, under force and moving rapidly, not only floods, it bites. Where the European tsunami might not rush all the way into the lowlands in England's interior it will certainly rush into any lowlands along the eastern seaboard and force up the Thames River to roil London's docks. This will not be a flood, but a scourge, tearing away buildings and docks and all unfortunate to be in its way at the time.

As is our usual practice, we are closing the March Q&A and opening the April Q&A. Please post your questions there. Thank you.