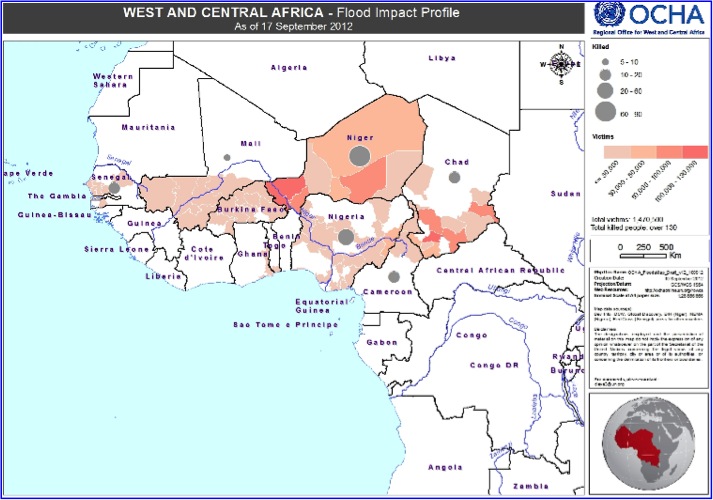 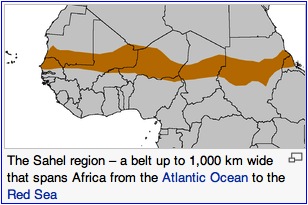 A food and nutrition crisis is affecting millions of people across the Sahel Region of Western Africa this year, due to a combination of drought, high grain prices, decrease in remittances, environmental degradation and population displacement coupled with chronic poverty and vulnerability. 18.7 million people are facing food insecurity (including 1.6 million in northern Mali) and more than 1 million children under the age of five are at risk of severe acute malnutrition.

The Sahel is the ecoclimatic and biogeographic zone of transition between the Sahara desert in the North and the Sudanian Savannas in the south. It stretches across the north of the African continent between the Atlantic Ocean and the Red Sea. The Arabic word sāḥil ساحل literally means "shore, coast", describing the appearance of the vegetation of the Sahel as a coastline delimiting the sand of the Sahara.

In May 2012, United Nations humanitarian chief Valerie Amos warned that more than 18 million people were facing hunger across eight countries in West Africa including the Sahel region.[1] A combination of failed crops, insect plague, high food prices, conflict and drought collectively cause the ensuing famine.[2]

Mauritania and Chad have recorded a loss in crop yield of over 50% when compared to 2011. Food reserves in the areas affected are very low and combine with corn prices soaring by 60-85% compared to averages over the last five years. In Chad alone this food crisis affects some 3.6 million people.[3]

Since 15 Aug 2012, areas in the North and Far North Regions of Cameroon have been experiencing heavy rainfall and subsequent flooding. The rains and floods have destroyed or damaged many houses, leaving about 25,000 people homeless. Most of these have found shelter with host families, but 5,000 have sought refuge in school premises. Almost all crops and granaries of the affected families have been destroyed, and livestock was lost as well. The flood situation is likely to deteriorate as it is still early in the rainy season. (IFRC, 6 Sep 2012) Heavy rains in early August 2012 caused flooding in many parts of the country. In the Rig Rig district in the Kanem region, buildings, food stocks, and crops were damaged and 220 houses were destroyed. Around 3,000 people were in need of shelter. In the Sila region, more than 13,000 households were affected, and the flood blocked major humanitarian supply routes. In Guera, about 850 people were in need of emergency support. Floods were also reported in many areas of N’djamena, the capital. (OCHA, 19 Aug 2012) 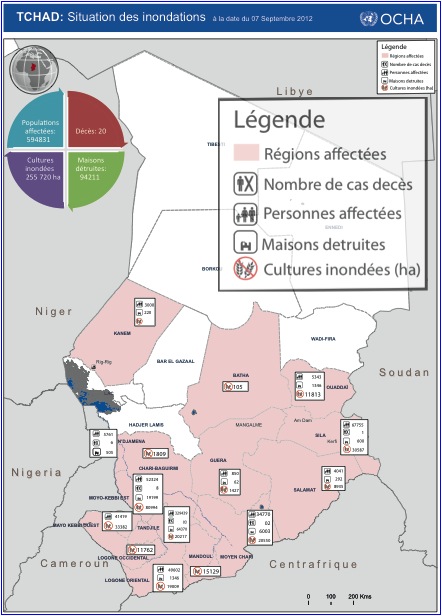 Heavy rains have caused flooding in various parts of Niger since the end of July 2012 as part of the rainy season. By 5 Sep, at least 68 people had been killed and 485,000 affected by floods, which have hit the Tillabery region of the land-locked country hardest. (OCHA, 5 Sep 2012)

Summary: During the past few weeks, heavy rains caused severe flooding in the regions of Dosso, Niamey, Agadez, Zinder, Maradi, Tahoua, Tillabéry and Diffa. To date, over 400,000 people are reportedly affected and the latest meteorological forecast predicts additional rains over the next week. The Red Cross Society of Niger responded immediately in organizing assessments alongside the authorities and other humanitarian agencies, providing non food items from pre-positioned stock and assisting in the evacuation and medical treatment of injured persons. Flooding in Niger has caused many deaths, destroyed houses, and populations being displaced, The humanitarian situation is critical, the international community is responding with France sending civil security emergency rescue teams. The International Charter was triggered by the French civil security in order to assist the organization of emergency response.
This crisis cartographic product shows the flood situation in Niamey area, as detected from a TerraSAR-X image (3,25m) acquired the 29th of August 2012,
This map should be used with precaution, exhaustivity is not guaranteed, particularly in urban areas. 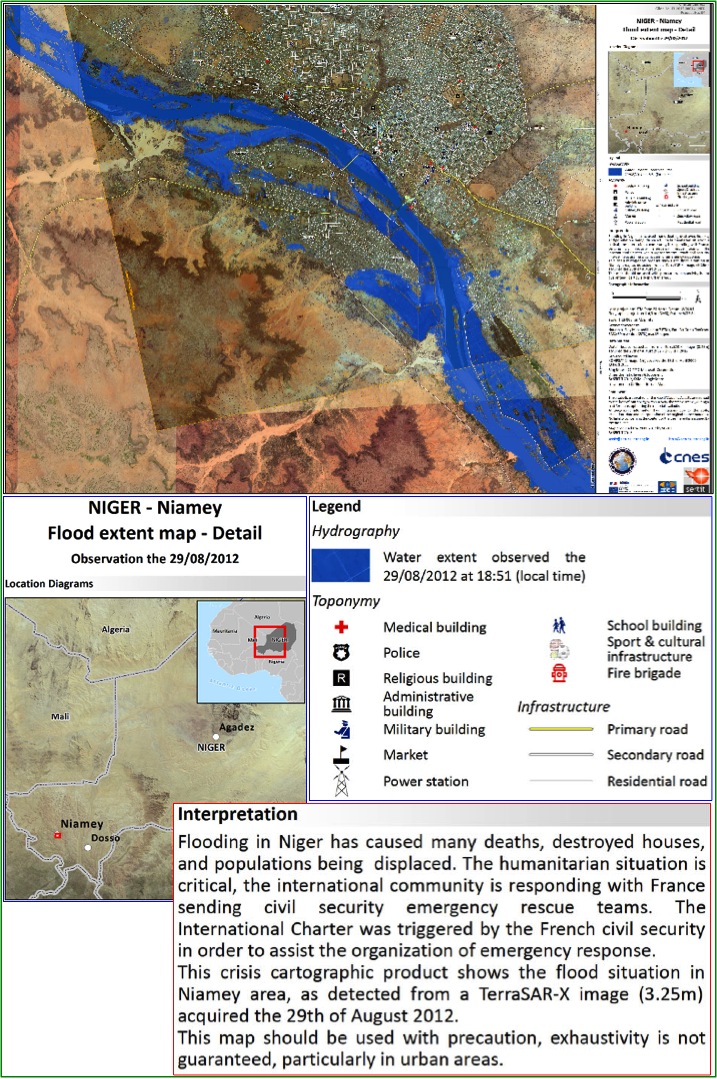 Heavy rainfall in central Nigeria on 22 Jul 2012 forced a dam to overflow, causing flooding that left 39 people dead and destroyed or damaged some 200 homes in Jos (UNICEF, 25 Jul 2012). 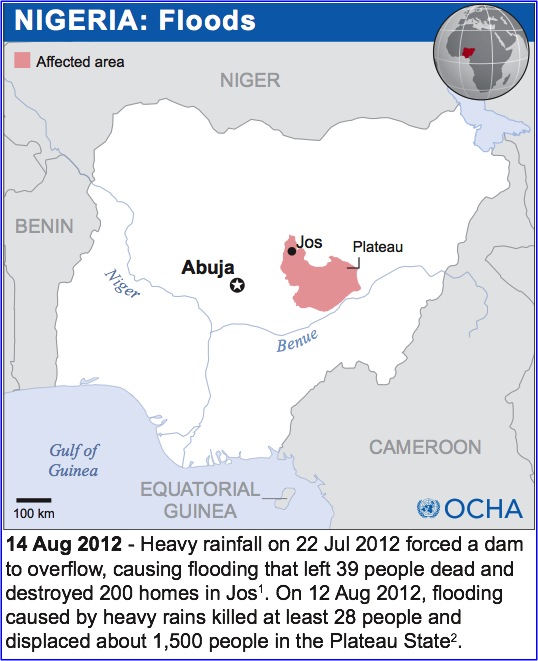 Between early July and early September 2012, flooding claimed an estimated 137 lives in Nigeria and forced thousands more to relocate, according to Reuters. In addition to the challenges posed by heavy rains, Nigerians had to cope with the release of water from the Lagdo Dam in neighboring Cameroon, which further swelled the Benue River. Flooding from the dam release was blamed for 30 deaths in Nigeria, Agence France-Presse reported.
These images show a stretch of the Benue River in eastern Nigeria, around the city of Lau. … Water varies from electric blue to navy, vegetation is bright green, and clouds range in color from nearly white to pale blue-green.
In 2009, the Benue River was a relatively thin river bordered by small, isolated water bodies. Three years later, the river had spilled over its banks, engulfing the small lakes on either side. Flood waters often carry heavy loads of sediment, and such sediment might account for the relatively light blue along part of the river. 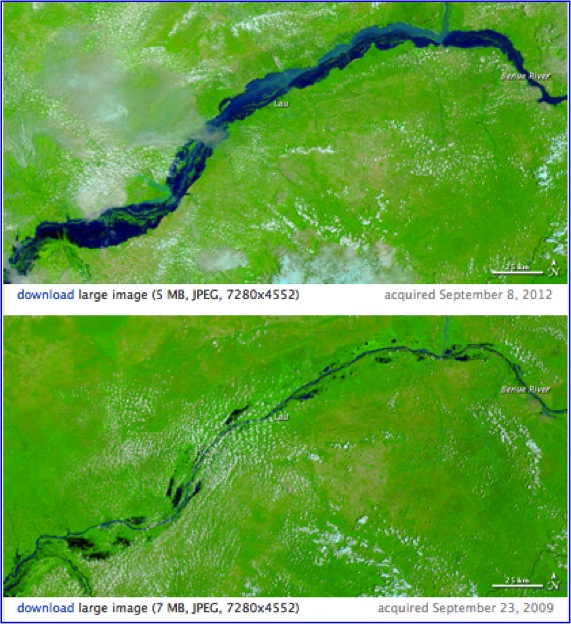 1) Heavy rains have resulted in fatalities and massive destruction in South Darfur, the northern Bahr el Ghazal, Warrap, and Jonglei states of South Sudan. Flooding potential remains as above-average rains are forecast during the next week.

2) Since July, heavy rains causing flooding and inundation along the Niger and Benue Rivers have led to the displacement of thousands of people and many fatalities in eastern Nigeria. Enhanced rainfall forecast could exacerbate the ground conditions.

3) Heavy rains over the Ethiopia highlands have caused the Atbra River to outburst, resulting in flooding that has affected thousands in the Nile River. The continued, heavy rains have also already impacted the Kassala and Gadaref states of Sudan. Ground conditions may worsen as heavy rains are expected to continue over western Ethiopia during the next week.

4) Both anomalous seasonal rainfall and northward position of the Inter-Tropical front has favored breeding conditions for desert locusts over the southern Mauritania-western Mali border, central Niger-eastern Mali, Chad, and east-central Sudan. The continuation of above-average rainfall during September could lead to locust outbreak across many regions.

No break to heavy rains throughout parts in the West.

During the last seven days, a continuation of enhanced precipitation was observed throughout many portions of West Africa. The highest weekly precipitation accumulations were experienced throughout many local areas in southern Senegal, The Gambia, and Guinea-Bissau with ground measurements reporting rainfall amounts in excess of 100mm. Off to the east, ample rainfall amounts were also received across the Mopti and Segou provinces of central Mali. Across portions of southern Niger and western Nigeria, a reduction of weekly precipitation was observed compared to previous weeks. However, well-distributed heavy rains (50>mm) continued throughout much eastern Nigeria during the last week (Figure 1).

Since early August, several consecutive weeks of enhanced rainfall has led to a robust distribution of moisture surpluses across the African Sahel. The highest rainfall surpluses are observed over parts of southern Mauritania, Mali, Burkina Faso and southwestern Niger, as many local areas in these countries have experienced over twice their normal rainfall accumulation over the last 30 days (Figure 2). The seasonally anomalous rains have elevated the risk for localized flooding, river basin inundation, and enhanced environmental conditions for locust outbreak and migration in the Sahel. Since August, locally heavy rainfall has already resulted in flooding and fatalities over the Gambia and many regions of Nigeria, and a continuation of oversaturation is likely to increase waterborne disease outbreaks across parts of costal West Africa. Although the above-average moisture conditions are generally beneficial to cropping activities, an excess of moisture could also destroy crops and ultimately reduce yields by end of season.

For upcoming outlook period, there is a high probability for heavy rains to continue across West Africa, with the highest amounts forecast over portions of Guinea, Mali, Niger, and eastern Nigeria.

In addition to the wet conditions in western and eastern Africa, portions of Lesotho, Swaziland and the Kwa-Zulu Natal region observed unseasonably heavy rainfall during the last seven days. The anomalous event produced rainfall accumulations in excess of 100mm in many local areas, with some coastal areas receiving over 200mm. These heavy rains over a short period triggered localized floods, and damages to infrastructure. The excessive rains caused extreme runoff anomalies observed from Lesotho to Swaziland, affecting the much of the Kwa-Zulu Natal state, as well as the Free State and Mpumalanga state of South Africa.